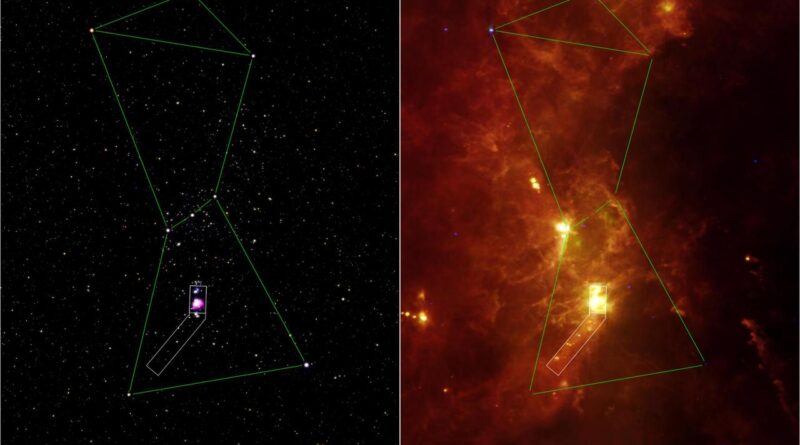 As mentioned in last months Space is The Place, CPRE, The Countryside Charity, are inviting people to join in their annual Star Count; taking place between 26 February and 6 March.

You can sign up here: CPRE star count. If you are taking part in the star count you can also take the opportunity to locate Sirius and the Orion Nebula. See the relevant sections below:

Sirius is the brightest star in the night sky. At 8.6 light years away it is also one of the nearest stars to us (after the Sun). Sirius sparkles brightly in the southern part of the sky and can be easily spotted at the heel of the constellation of Orion the Hunter, which is why it is called the Dog Star. Find the three stars that make up the belt of Orion and then trace a line down to the left to find Sirius. If you can find Sirius you have also found the constellation of Canis Major (The Great Dog).

Sirius is a white / blue star but its light seems to flicker through many colours as it shines through the turbulence of Earth’s atmosphere. As such, it is a star that actually twinkles in the evening sky. There is an image of all its apparent colours here: Colours of Sirius.

Orion is one of the easier constellations to find. Look south and look for 3 stars in a horizontal row (this is Orion’s Belt). From this anchor point you should be able to identify a box of stars around the belt. From the observer’s point of view: in the upper left corner of the box is the red star, Betelgeuse. In the lower right corner (diagonally opposite) is the bright blue star, Rigel.

Hanging down from Orion’s Belt is a line of three fainter stars, these form Orion’s sword. With Binoculars (10 x 50 are best) find the central star in Orion’s Belt. Scan down and you should be able to find Orion’s sword. In the middle of the sword will be the Orion Nebula. You should be able to see a bright area of stars surrounded by a hazy glow (nebulosity). A telescope will provide further detail, revealing 4 very bright stars (known as the Trapezium) at the centre of the nebula. The nebula itself is a vast cloud of dust and gas illuminated by the newly formed stars at its core.

2nd and 3rd February: A crescent Moon appears to be close to Jupiter

26th of February: Early morning, a crescent Moon appears to be close to Venus

Jupiter shines brightly in the southern part of the sky. It is low in the sky now and sets about 6.30pm. By mid-month it will be difficult to see, disappearing into the twilight. On the 2nd and 3rd of February it will appear to be close to a crescent Moon.

Venus shines in the south-east: bright and unmistakable in the early morning sky. It makes a nice pairing with a crescent Moon on the 26th of February.

The International Space Station is one of the brightest objects in the night sky. It is not hard to spot and flies-past periodically throughout the year. Fly-pasts tend to swing from PM to AM – and currently it can be viewed in the early hours of the evening. Typically it will be in the sky for up to four minutes at a time – slowly moving across the sky, at first bright and then fading as it moves away from us and over the horizon.

ISS sightings up to the 16th of February