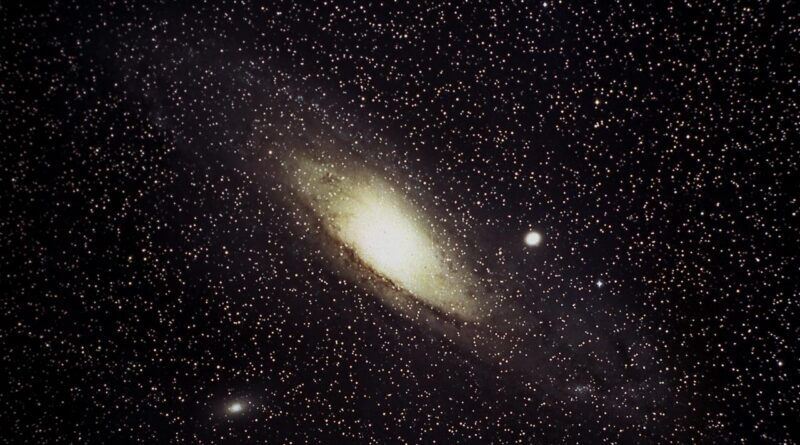 In October’s Night Sky: The Andromeda Galaxy, Jupiter and the GRS, The Orionids Meteor Shower, Clocks go back on the 31st.

Clocks Go Back: 31st of October

On the 31st of October all amateur astronomers will breathe a sigh of relief as the clocks go back an hour, and UK times will now align with Co-ordinated Universal Time (UTC).

Generally a good meteor shower. This year the Orionids peak on the evening of the 21st going into the early morning hours of the 22nd of October. Unfortunately viewing is poor on the night, as a nearly full Moon will obscure all but the brightest meteors.

October is a good time to look for the Andromeda Galaxy (M31). The constellations of Pegasus, Cassiopeia and the copper coloured star, Mirach, will guide you. Once located it is easy to find again.

Through binoculars (10×50) the galaxy appears as a circular fuzzy patch. Through a telescope the galaxy obtains more density, its core becoming more apparent (seeming to be a bit like a fluffy meringue). It is rather remarkable that the observer is seeing the accumulated light from a trillion stars, 2.5 million light years away.

See here for the Chart. And here for directions.

9th October: The Crescent Moon appears to be close to Venus

13th – 15th Of October: On these nights the Moon is in the same part of the sky as Jupiter and Saturn

15th October: The Moon appears to be close to Jupiter

Jupiter and the Great Red Spot

Jupiter is now clearly visible in the southeast as darkness falls, from around 10.00pm. The planet is large and bright at the moment, and is higher in the sky than it has been for some years, so good viewing is possible. Binoculars will show its more prominent moons. A telescope will show all 4 of the Galilean moons, Jupiter’s equatorial bands and, maybe, the Great Red Spot (the giant storm that circulates around the planet). It should be noted: that the human eye is not sensitive enough to see colour in the Great Red Spot (GRS) and through a telescope your image will be black and white; and that the GRS is actually quite difficult to see.

I have been observing Jupiter through a long refractor with a 102mm objective lens  – this gives me a useful magnification of around 110x with a 9mm eyepice. With this set up, I can see the equatorial bands quite clearly (and obviously the  moons) but, so far, the GRS fits into the category of a discernible rather than a clear sighting.

Another issue with the GRS is that it circulates around Jupiter, at times it will be on the other side of the planet and not visible. In short, an observer needs to know when the GRS is visible to have a chance of seeing it. If you are intending to view the GRS, it is better to use a guide than to hope that you are looking in the right place at the right time. The Sky and Telescope website produces a useful guide here: Transit Times of the GRS.

Saturn and its Rings

Saturn is currently visible from about 10.00pm, it is low in the southeast, rising earlier as the month progresses. If you are looking at Jupiter it is easy enough to swing your telescope around to look at Saturn. The planet never disappoints and its rings can be seen even in small telescopes – one of the best sights in the night sky.

Venus is now very bright in the early evening sky, looking west, shortly after sunset. However, it is low down and is hard to see unless you have an unobstructed horizon. On October 9th, after sunset, Venus will appear to be close to the crescent moon.

There are no sighting opportunities up to the 21st of October. Go to  Spot the Station for precise times and for sightings in October after the 21st.

Note that the NASA Space Station Alerts service gives advance notice of when and where the ISS will be visible. The alerts service will notify you of the better sighting opportunities, that is, when the ISS is high in the sky and is visible for long enough to give you a good chance of spotting the station.