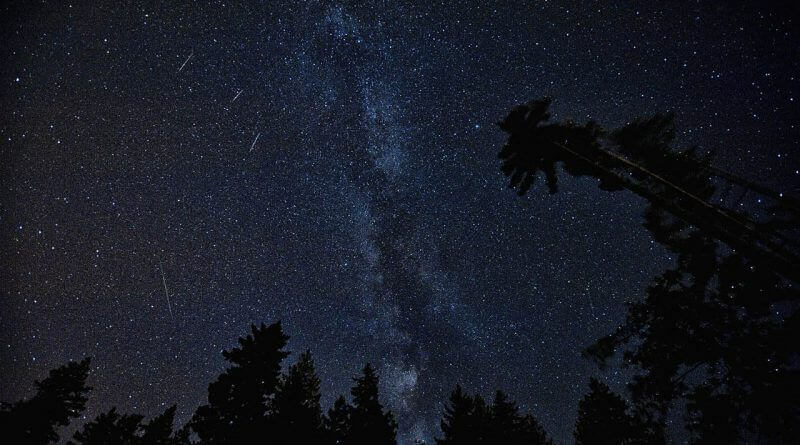 In the Night Sky Over Belper. August brings: the Perseids meteor shower, the Summer Triangle, first looks at Jupiter and Saturn.

The main event for August is the Perseid meteor shower. This year the Perseids are expected to peak between midnight on Thursday the 12th of August and the early hours of Friday morning on the 13th of August.

The Perseids take their name from the constellation Perseus which is where the radiant point of the shower appears to lie. Although the meteors can be traced back to Perseus it isn’t necessary to find the constellation. As long as you are looking upwards you have a good chance of seeing a meteor.

The Perseids are considered one of the best meteor showers of the year, so you have a very good chance of seeing lots of meteors during peak nights. The meteors are bright and fast-moving and some leave long trails and afterglows. Some may appear to be coloured, typically red or yellow.

It is worth noting that meteors tend to appear in clusters followed by a lull, so, sometimes, patience is needed. What you won’t see, unless astronomers have got it very wrong, is a meteor storm. A meteor storm is when the sky fills with shooting stars (like a celestial firework display). Meteor storms happen very rarely, the most famous in living memory being caused by the Leonids over North America in 1966.

This year, the Perseids are predicted to reach their peak rate between Thursday 12th of August and the early hours of Friday morning, reaching a maximum intensity just before midnight on Thursday 12th of August. The predicted peak rate is around 80 meteors an hour. However, this rate is based on perfect viewing conditions and a 360 degree view of the sky. Casual observers (i.e. you and me) will need a little bit of patience, and should expect to see a handful of meteors every couple of minutes or so.

The Perseids can be viewed as soon as it gets dark and observers just need to look upwards. The more sky you can see the better. Find a place without too much light pollution (so you can see a dark sky) and look up. The best technique is to find a place where you can lie on your back, or in a deckchair, or a hammock, so you can look straight up into the night sky.

Note that the peak night is not the only time you can observe the Perseids. Good meteor rates are also likely during the nights of Aug 11th – 12th and 13th – 14th. Spread your viewing over these nights as well, to avoid being clouded out!

If you miss the best nights it may still be worth looking, as technically, Perseids can be seen up to the 24th of August – but you will have to stay out longer to see a meteor and you will not see as many.

The Summer Triangle consists of three bright stars, Vega, Deneb and Altair. It can be seen high in the south as night falls. The Summer Triangle is an asterism (a pattern of stars in the sky) and is formed of the brightest stars from the constellations of: Lyra, Cygnus (also known as the Northern Cross) and Aquila. It also acts as a guide to the location of the Milky Way, as this seems to weave its way through the “triangle” (you will need a dark site to see the Milky Way).

Here’s how to find the Summer Triangle, from a video blog by Robin Scagell of the Society for Popular Astronomy, “August Stars 2021”.

The Crescent Moon: 9th of August. On the 10th and 11th, the crescent Moon will be in the same part of the sky as Mars and Venus – worth looking for if you have a low horizon to the west.

Full Moon: On the 22nd there will be a Full Moon.

This month it may be possible to see Venus, close to the horizon, and shining in the west. On the 11th it will appear to be close to a crescent Moon.

Mars is still visible. On the 10th of August it contrasts with Venus and a crescent Moon.

Both planets are close to the horizon at the moment (around chimney top height) and are visible as soon as night falls. Jupiter shining brightly. Look to the south-east to see the planets. Even small telescopes will show Jupiter’s four Galilean moons and Saturn’s rings.

No sightings are given between now (8th of August) and the 19th of August.

The Spot the Station website is updated regularly so you can check for sightings after the 19th of August. NASA Space Station Alerts will alert you to the best sightings in advance.

Derby and District Astronomical Society meetings are currently being held online, see link for their schedule of meetings. Contact the secretary@derbyastronomy.org for further details and links.

The DDAS produces a quarterly newsletter. The Summer edition can be found as a pdf here:  Aries Newsletter: Summer 2021.