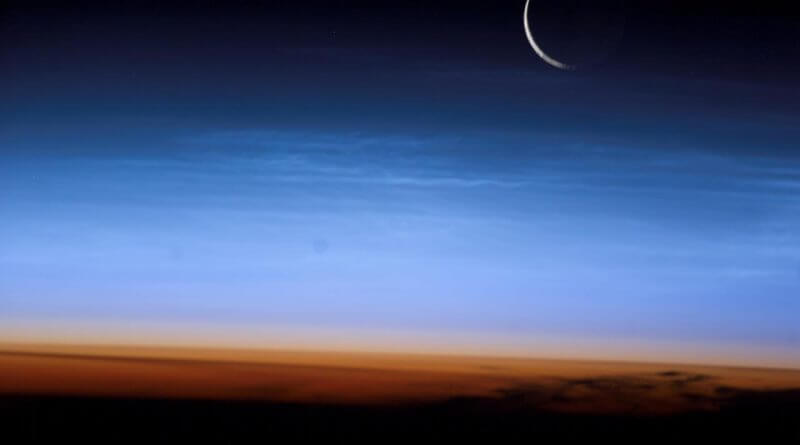 In the Night Sky Over Belper: A report on the partial eclipse of the Sun, NLCs, July meteors, notes on mega-constellation satellites, the Moon and Planets.

The Partial Eclipse Of The Sun: Report

The partial eclipse of the Sun on Thursday 10th of June was totally clouded out. Very disappointing, but that’s weather for you. We now have to wait until the 25th October 2022 for the next solar eclipse.

A lesson learnt, perhaps, is that solar projection relies on the Sun being able to shine strongly to project an image and, when obscured by clouds, the Sun is not bright enough for projection. A better approach could be observation using certified solar filters, as this would increase the chance of gaining an observation or image in cloudy skies.

The Summer months is when noctilucent clouds (NLCs) can be seen (see June’s Space Is The Place). However, they are a rare sight. To see these bright, silvery-blue wispy clouds, your best chance is to try looking towards the north-west during the darkest part of the night (from 11.00pm onwards).

July tends to see an increase in meteors. The Alpha Capricornids (peaks 2nd / 3rd August), the Delta Aquarids (peaks 29th / 30th July) and the Perseids will produce small numbers of meteors throughout July. If you are observing the night sky you may see a bonus meteor or two this month, a prelude to the main event of the summer – the Perseids meteor shower which peaks on the 12th / 13th of August.

Artificial satellites have long been a presence in the night sky. 5 years ago I thought it was worth commenting that, whilst looking for Perseids, I had also spotted a number of satellites. (Satellites Are Spinning, 2016). At the time I thought it was fascinating that websites like Heavens Above could track and identify satellites and also predict events, like the glints of reflected light from the Iridium satellites.

The satellites we see in the night sky represent both progress and space history (many objects are the remnants of previous space missions). However, the SpaceX Starlink “trains”, processions of satellites branching across the sky, seemed to me to presage a new phase in our relationship to space – the start of its industrialisation (see Space Is The Place, May 2020). Recently, I have noticed many more satellites in the sky, enough to worry about what this might mean for the amateur astronomer. I am used to the vista of stars I observe being stable points of light, each relating to the others. My astronomy is visual. I see by patient observation, generally directly through the eyepiece of my telescope. The introduction of 100s of new and moving objects into this vista disturbs this visual space. So far it is subtle: my concentration on Mars disrupted by a satellite speeding across my line of vision, a point of light moving in a field of stars, a procession of satellites distracting me from observing the Moon. But I wonder, how far away am I from expecting every point of light to start moving? Will the stability I am used to, be replaced by ever present motion?

The SpaceX Starlink satellites are only the beginning of a process, other companies plan to launch similar mega-constellation satellites into space. The aim is to create satellite grids capable of providing high-speed global broadband coverage and data services. A potential scenario is that tens of thousands of satellites will be launched over the next decade. What that might mean for astronomy and space exploration was the subject of the“Losing the Sky” event – 15th June 2021. A wide range of experts (including Brian Eno) expressed concerns and debated the issues relating to the ongoing launching of mega-constellation satellites. Go to the Losing the Sky event page for more details, to access recordings of the debate, and to find out: Where do we go from here?

There is also a book “Losing the Sky ” by Andy Lawrence (Royal Observatory Edinburgh) which can also be accessed through the site.

(Thanks to Jo Kirk for suggesting this article).

The Crescent Moon: 11th and 12th of July, a thin crescent Moon will be in the same part of the sky as Mars and Venus – worth looking out for if you have a low horizon.

Full Moon: On the 24th there will be a full Moon.

The planet sets one and a half hours after the Sun – but it is very close to the horizon and hard to see in the bright twilight – even though it is currently shining at a bright magnitude. The best views will be later in the year.

Mars is still visible. Look for it on the 11th and 12th of July, when it will appear to be close to Venus (and will contrast with) a crescent Moon.

Both planets are close to the horizon at the moment. Best seen in the early morning hours from midnight. Look to the south-east to see them. As the month progresses the planets will rise earlier, becoming visible as night falls.

Good sightings of ISS up to Thursday 21st of July are as follows:

The Spot the Station website is updated regularly so check for sightings after the 21st of July. The NASA Space Station Alerts service will tell you in advance when to expect the best sightings.

Derby and District Astronomical Society meetings are currently being held online, see link for their schedule of meetings. Contact the secretary@derbyastronomy.org for further details and links.

The DDAS produces a quarterly newsletter. The latest edition (summer) can be found as a pdf here:  Aries Newsletter: Summer 2021.