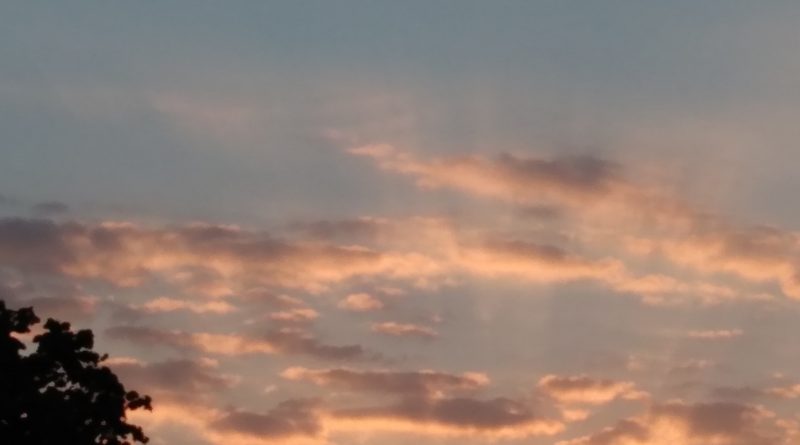 In the Night Sky Over Belper: A partial eclipse of the Sun on the 10th June, NLCs, Summer Days, the Moon and Planets.

A Partial Eclipse Of The Sun: 10th June

The Sun will still be very bright during the eclipse and should not be looked at directly.  It is extremely dangerous to just go out and look, even a quick glance could risk permanent eye damage!

You will need to take precautions to view the eclipse safely. The best way to view the eclipse is either by using proper solar filters (designed and approved for the purpose of looking at the Sun) or through some form of solar projection where the Sun’s image is projected onto a screen or other surface (this is the method I will be using).

There is good advice about how to safely view the eclipse here: Royal Astronomical Society: Viewing The Eclipse Safely.

June is a good time to look for noctilucent clouds (NLCs). NLCs are clouds that form high up in the atmosphere (about 50 miles above the Earth’s poles). The clouds are normally too faint to be seen as they are made up of ice particles. However, in the summer months the angle of the sun can sometimes highlight NLC’s so that they are visible.

It is rare to see NLCs,  your best chance is to try looking towards the north-west during the darkest part of the night (from 11.00pm onwards). If lucky, you may catch sight of these glowing wispy clouds.

There is a useful guide to observing noctilucent clouds here: British Astronomical Association.

The 1st of June marked the start of meteorological summer.

The Summer months bring longer days and shorter nights. Technically, we are seeing extended astronomical twilight, the Sun is below the horizon, but darkness is yet to fall and there is still some light in the sky. During astronomical twilight most bright stars will be visible, but it is difficult to see fainter stars or diffuse objects like galaxies.

The Summer Solstice, the longest day of the year and the start of astronomical summer, takes place on Monday 21st of June. Sunrise will be at around 4.52am and the Sun will set at about 9.26 pm. After the Solstice, nights will start to get gradually longer. (Headline image: “Twilight, 31st of  May” – by author).

12th of June – A crescent Moon, look north-west shortly after sunset to spot it.  It will be easier to see as a waxing crescent Moon on the following nights.

13th of June – Look for Mars, just below the crescent Moon

If you have a low horizon it might be possible to glimpse Venus in the north-west and shortly after sunset. Venus will start to rise in the sky over the summer months, but the best views will be later in the year.

Mars is still visible. Look for it on the 13th of June, when it will be below (and will contrast with) a crescent Moon.

Both planets appear in the early morning hours, rising after 1.00am. Look to the south-east to see them.

There are no sightings of ISS up to Thursday 17th of June.

The Spot the Station website is updated regularly so check for sightings after the 17th of June. The NASA Space Station Alerts service will give you advance notice of the best sighting for ISS.

Derby and District Astronomical Society meetings are now online. The next “Introduction to Astronomy” meeting is scheduled for Friday the 18th of June (7.15pm) and will be a presentation on the exploration of Mars.

Meetings are held on zoom, contact the secretary@derbyastronomy.org for further details and links.