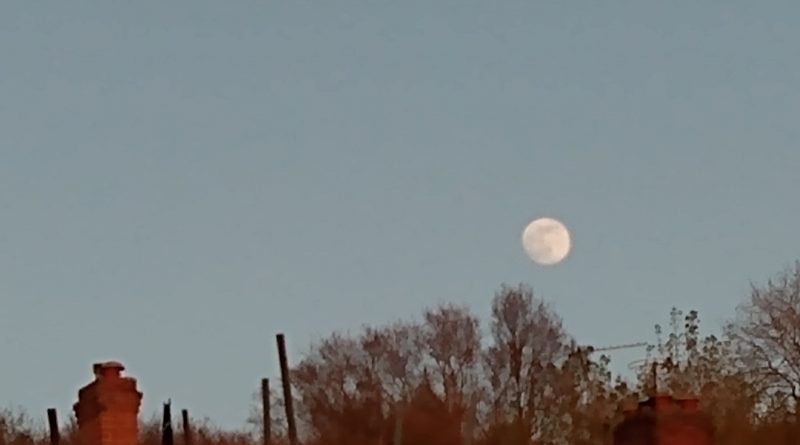 In the Night Sky Over Belper: Finding Algieba, a chance to spot Mercury, Venus returns to the night sky, May’s supermoon.

If you look south as darkness falls, you should see the constellation of Leo the Lion (a constellation that looks very much like its description).  In Leo, find Algieba.  See the rough sketch below.  Use the bright star Regulus as your guide and, if you can make out the “sickle” shape, Algieba is the next brightest star in the sickle. 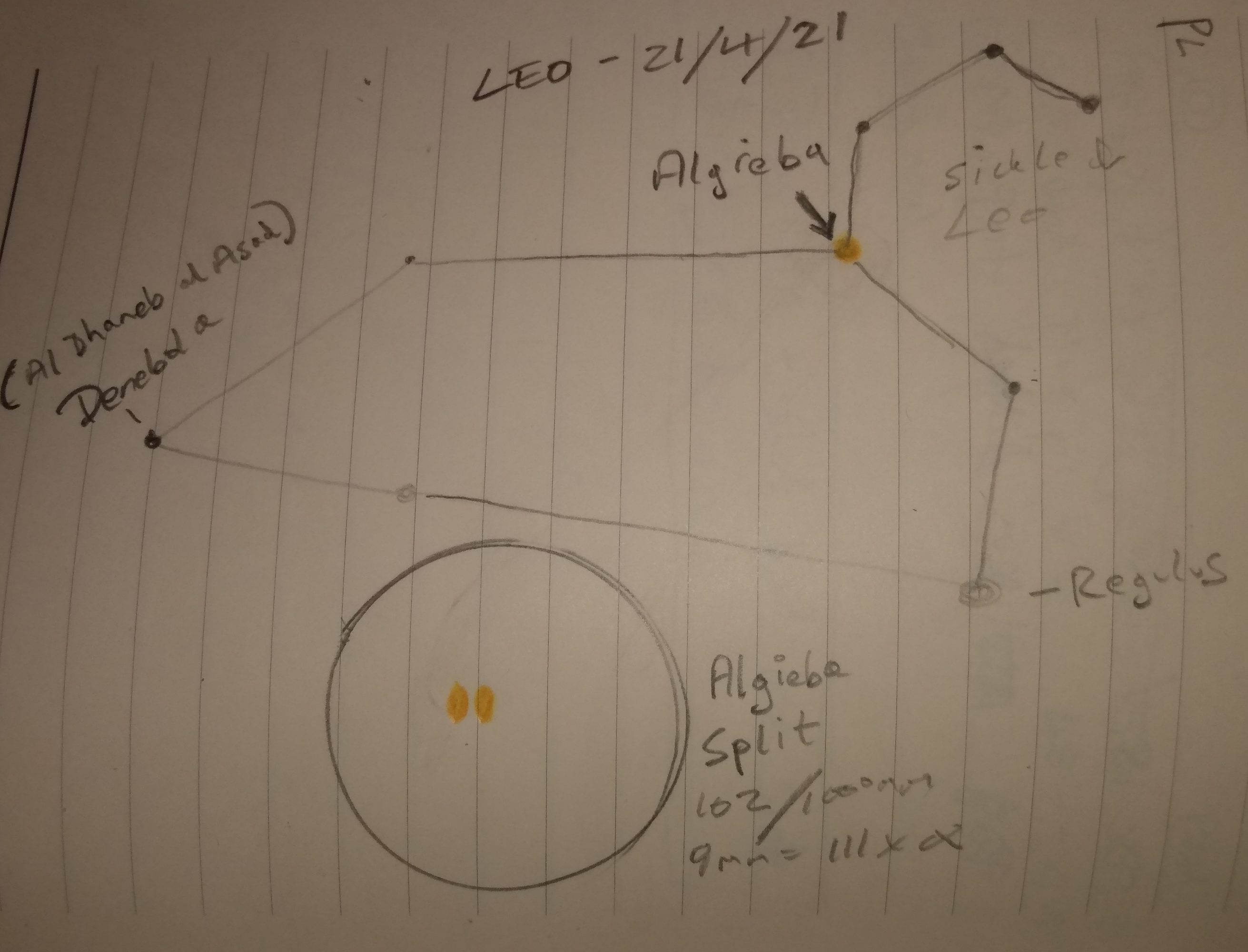 It is worth looking at Algieba through binoculars – where it will be revealed as an attractive, gold coloured star.

If you have a telescope you may be able to see that Algeiba is a binary star system (two stars that are orbiting each other).  I was able to “split” the star using a 102mm long refractor at a magnification of approx. 111x (into a pair of matching elongated discs, so not a perfect split – see the sketch above for what it looked like).

13th of May – A thin crescent Moon, look north-west shortly after sunset to spot it.  It will be easier to see as a waxing crescent Moon on the following nights.

26th of May – A bright full Moon.  This Moon is also a supermoon (meaning that the full Moon coincides with perigee – the point in the Moon’s monthly orbit where it is closest to Earth).

The Moon Illusion – As mentioned in previous articles (Nailed, July 2017) the best images of the Moon are always those that are taken when the Moon is close to the horizon.  This is because the Moon looks bigger (supermoon or not) when contrasted with objects in the foreground.  The Moon Illusion is further enhanced by using a zoom lens or function (see headline image, “Not a Supermoon” – taken on my mobile phone to show the effect).

Returning to the evening, the planet now appears in the north-west, shortly after sunset and low to the horizon.  As the month progresses, Venus will start to rise in the sky, but the best views will be later in the year.

On the 13th of May and about half an hour after sunset, look to the north-west for a chance to see the planet Mercury.  It will appear to be close to a thin, crescent Moon.  If your horizon is low you may also be able to see Venus at the same time.  Mercury is going to be hard to find because the sky will still be light at this time – but if you can spot the Moon you should be able to spot Mercury above it and to the right.  Once Mercury is located it will be easier to find (and probably easier to see) on the following nights up to the 17th / 18th May.

28th of May.  Another chance to spot Mercury, this time it will appear to be close to, and to the left of, the much brighter Venus.  Look north-west, shortly after sunset (you will need a low horizon to see this).

Both planets appear in the early morning hours.  Both planets are low to the horizon.  Look to the south-east to see them.

Mars is still visible.  Look for it on the 15th of May when it will be close to a crescent Moon (a good pairing for binoculars).

NASA’s Perseverance Rover is now sending regular images from the surface of Mars, in particular video of the flights of the Ingenuity helicopter.  See the NASA website for images and more: Mars 2020 Perseverance Rover.

The Chinese mission to Mars (Tianwen-1) plans to land the Zhurong rover on Mars sometime in mid-May.  Watch this space: CNSA.

There are good opportunities to see the International Space Station this month.  From Friday 14th of May to the 20th, ISS will appear in the night sky in time slots between 9.52 pm and 2.00am.  Check at Spot the Station for further details, for detailed sighting information and for further sightings beyond the 20th of May.

You can also sign up to the NASA Space Station Alerts service for advance notice of when the ISS will be visible.  The alerts service gives you notifications for the best sightings in terms of height above the horizon, time, and duration.

Derby and District Astronomical Society meetings are now online.  The next “Introduction to Astronomy” meeting is scheduled for Friday the 21st of May (7.15pm) and will be a presentation on “What’s in The Night Sky over the Summer Months”.

Meetings are held on zoom, contact the secretary@derbyastronomy.org. for further details and links.