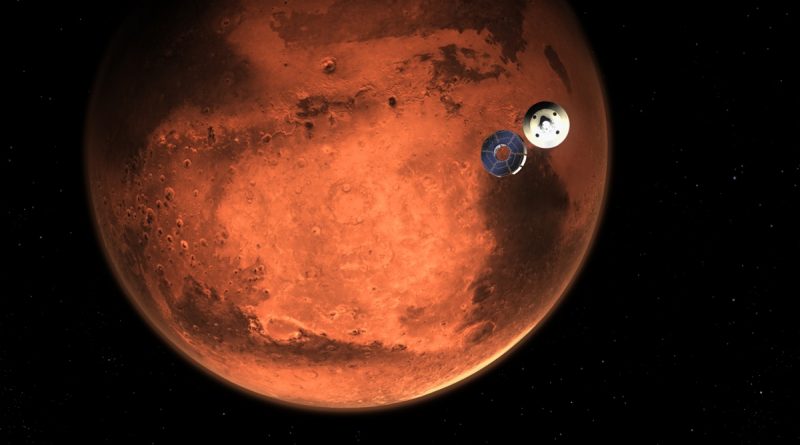 In the Night Sky Over Belper: Mars is the only bright planet, take part in the Star Count, missions to Mars, find the Hyades and the Pleiades star clusters.

Every year the Campaign to Protect Rural England conducts a Star Count. The aim is to track the extent of light pollution across the country and to keep track of how this is changing year on year (a sort of cosmic census).

This year the CPRE is asking people to sign up to count how many stars they can see in the constellation of Orion on any clear night between the 6th and the 14th of February. They give full instructions for what to do and where to look (no telescopes required) and the activity can be undertaken safely from your garden, balcony or even a bedroom window.

The results of last year’s star count can be found here: Star Count 2020.

Three Space Missions To Arrive At Mars In February

Tianwen-1: China intends to land a rover on the surface of Mars. However, before it does that it needs to establish the first stage of its mission by putting the probe into orbit around Mars. The Tianwen-1 probe will approach Mars orbit on the 10th of February, and a landing on Mars is expected in May.

Emirates Mars Mission: The Hope orbiter has been launched by the United Arab Emirates. The UAE mission is designed to monitor the atmospheric conditions on Mars and to observe weather patterns on the planet. This probe is also scheduled to enter Mars orbit around the 10th of February. You can find out more about the mission and track the probe here: Emirates Mars Mission, Hope Probe.

Perseverance: NASA’s rover is scheduled to land on the surface of Mars on the 18th of February. Amongst other objectives the rover intends to search for signs of life and will also launch Ingenuity, a miniature helicopter that will attempt the first powered flight from the surface of another planet. You can follow the progress of the mission (and the landing itself, which will be shown on youtube) through NASA’s space mission feed here: 2020 Mission Perseverance Rover.

The illustration above (courtesy of NASA/JPL-Caltech) shows NASA’s Perseverance rover casting off its spacecraft’s cruise stage, minutes before entering the Martian atmosphere. Landing on Mars is a complex procedure: hundreds of critical events like these need to be completed exactly on time for the rover to touch down on Mars safely.

The Pleiades and Hyades Star Clusters

On the 19th (looking southwest) the quarter Moon sits between the star clusters of the Pleiades and the Hyades. Both of these star clusters are excellent binocular objects (I have written about them before: see Space Is The Place, January 2017 and February 2017).

If you are unfamiliar with these star clusters, February is a good month to locate them. There is a guide to how to find the red star Aldebaran (your marker for the Hyades) and the Pleiades here: Wiki how: Pleiades Star cluster.

The Moon will appear to be close to Mars on the 18th of February.

The quarter Moon will appear to sit between the Pleiades and the Hyades star cluster on the 19th of February (Mars will also appear in the same part of the sky).

There is a full Moon on the 27th of February.

Mars is the only bright planet on view in February at the moment. It is high up, shining red in the southwest. It will gradually diminish in brightness towards the end of the month. Mars will be close to the Moon on the 18th of February.

Amidst the cloudy nights, January the 21st was clear enough to locate Uranus, initially using Mars as a marker. Through binoculars Uranus could be seen as a faint “star” sitting below Mars. However, a star guide was needed to confirm the sighting. Observed through a telescope (a 102mm refractor and at a magnification of around 111x) Uranus resolved into a very small pale blue disc (see rough sketch). 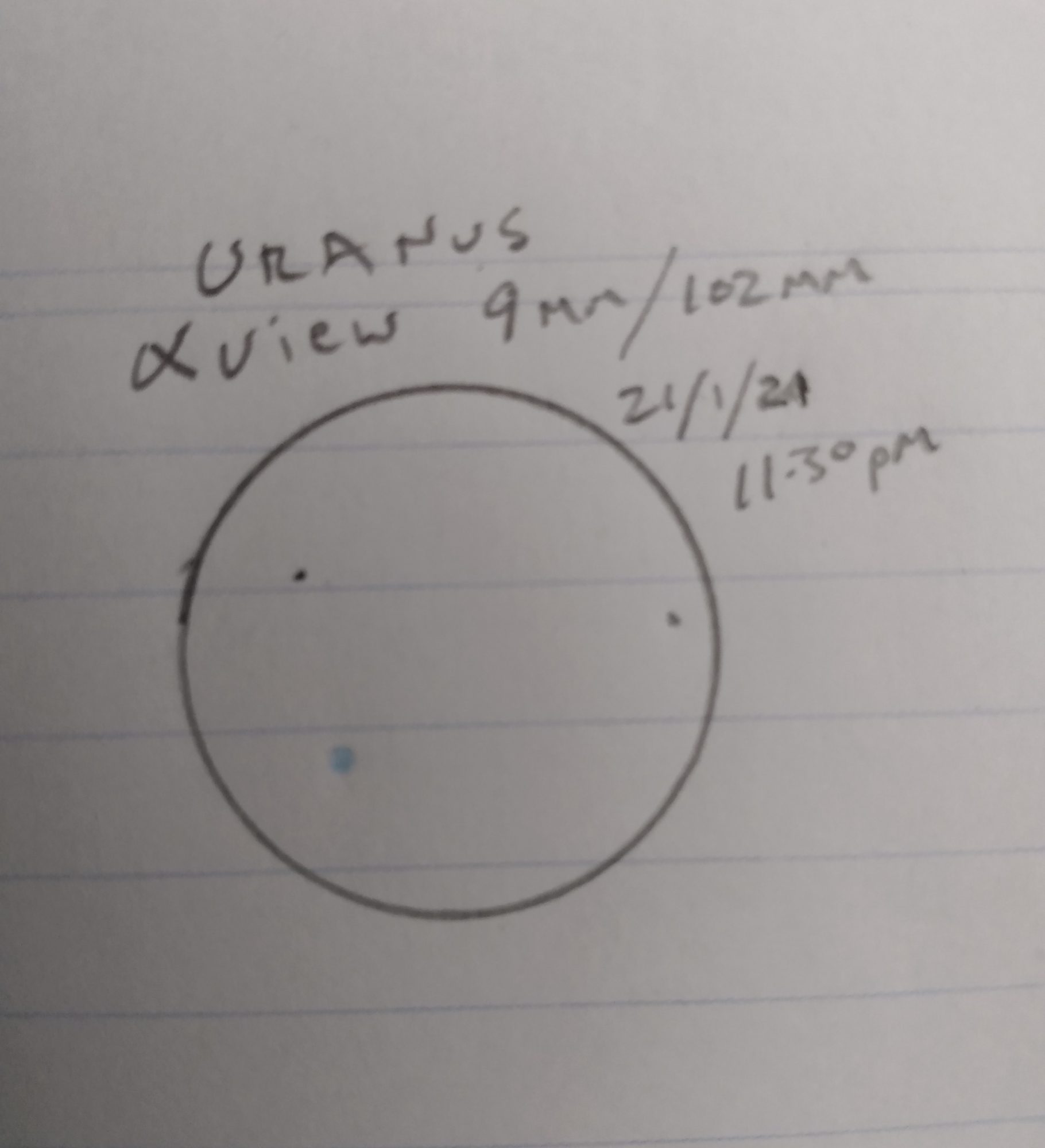 With this size of ‘scope I was not going to see much more, and pushing up the magnification only dimmed the image – and made manual tracking difficult as the planet constantly moved out of view due to the Earth’s rotation. Nevertheless, the planet is so distant (at its closest it is 1.6 billion miles away) that any view of Uranus showing it as a planetary disc is a compelling sight.

Uranus can be seen throughout February, but you will need an up-to-date star guide (such as Sky Live) to locate it.

The ISS can be seen in the early hours of the evening. The best views in the first week of February are given as:

Check at Spot the Station for further details and for sightings in January after the 7th of February.

The Derby and District Astronomical Society meetings are now online.  Their next main meeting is scheduled for Friday the 5th of February and will be a presentation on “Observing Nebulae”.

The society’s next Introduction to Astronomy evening will be held on Friday 19th February 2021, 7.15 pm on Zoom. The meeting will discuss the processing of astro images.