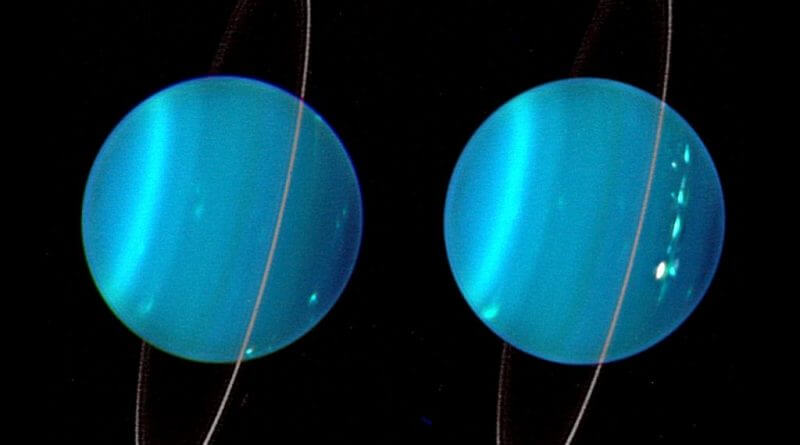 In the Night Sky Over Belper: Mars still shines in the south, Venus shines in the dawn sky. A possible chance to locate Uranus. Good sightings of the ISS space station.

2021 is potentially a good year for space missions. As reported in earlier articles, both China and the US are reaching out to the Moon and Mars.

10th Feb – Tianwen-1: China intends to land a rover on the surface of Mars.

18th Feb – Perseverance: NASA’s rover intends to search for signs of life. It will also launch Ingenuity, a small helicopter, that will attempt the first powered flight from the surface of another planet.

June – Astrobiotic (a commercial company working in partnership with NASA) intends to land a rover on the surface of the Moon.

November – If all goes to plan, the ARTEMIS -1 rocket will launch an uncrewed space capsule to orbit the Moon. This is the first stage of NASA’s mission to return astronauts to the Moon by 2024.

Cloudy nights dogged the Jupiter and Saturn conjunction in December. The night when they appeared at their closest (the 21st) was clouded out. On the previous night and the night after the conjunction, I managed to position a small “grab and go” telescope to get fleeting views. The planets were very low to the horizon and so easily obscured by trees and the roofs of houses. 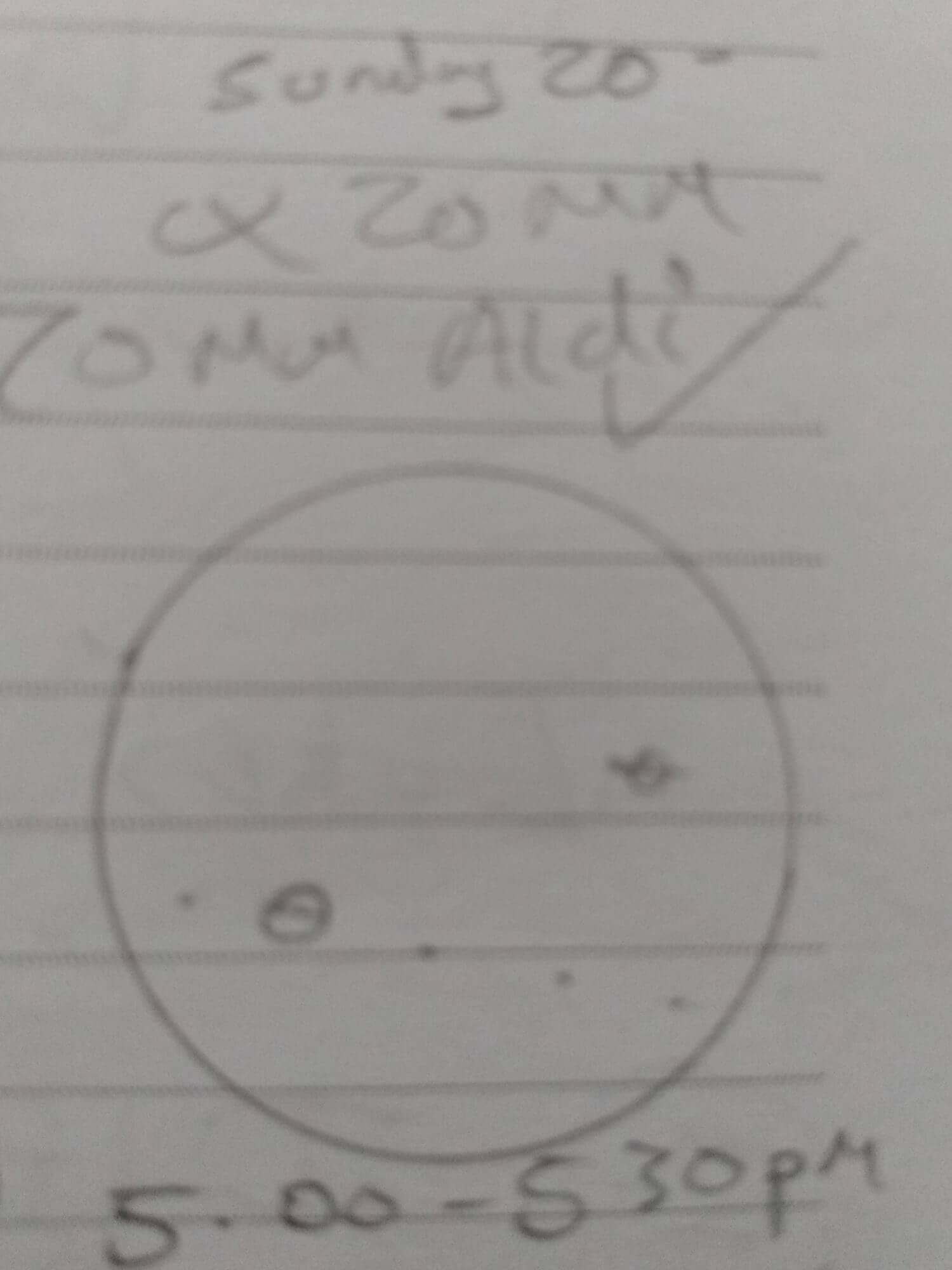 Alongside is a quick and approximate sketch of the view in the eyepiece of a small telescope at low magnification (35x) – as seen on the 20th of December.

And, below, is a naked eye view the night after the conjunction, when the planets were still relatively close, showing (roughly) the position and separation of the planets on the 22nd of December. 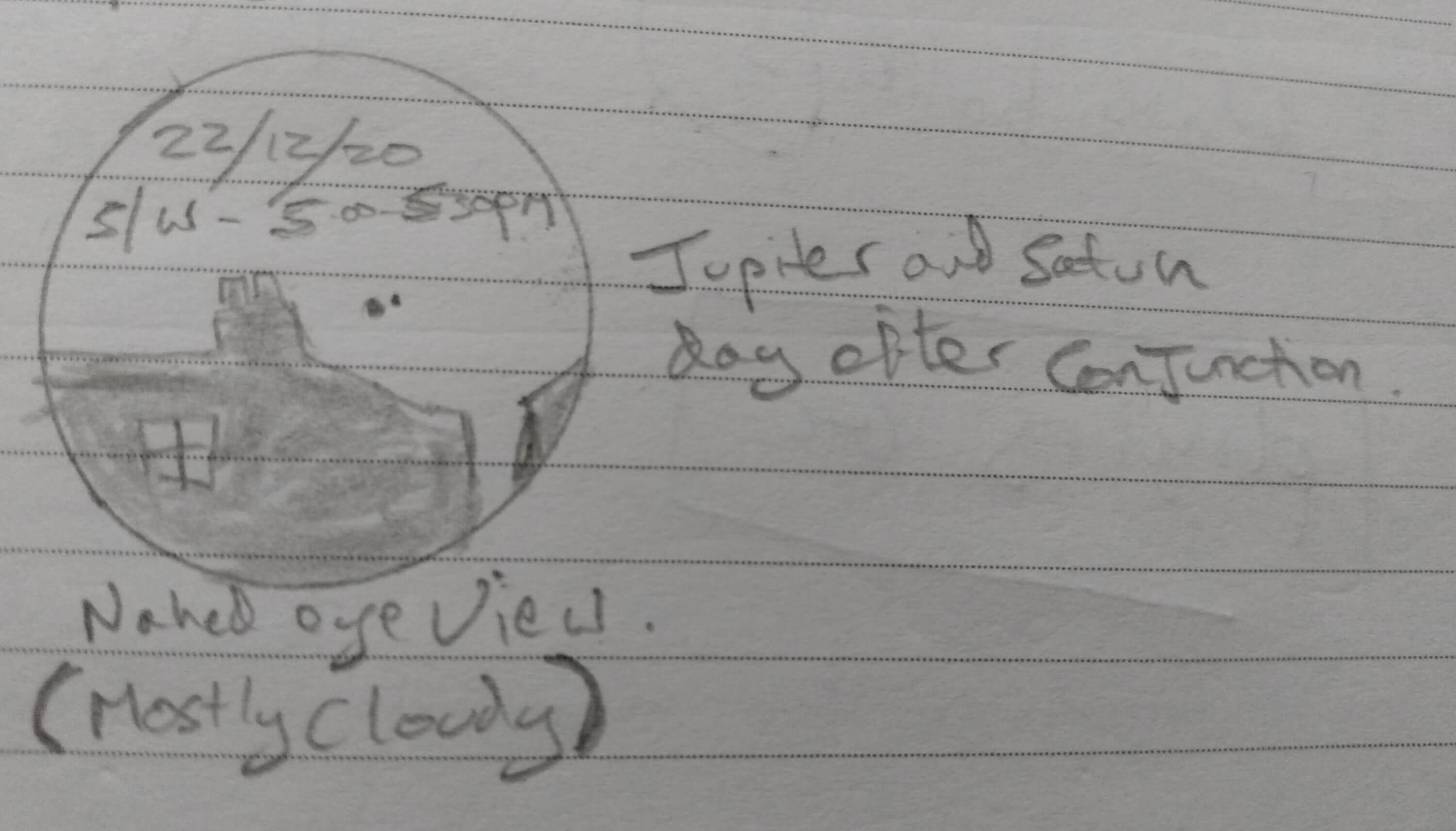 Both planets are now too low in the sky and set too early for most observational purposes.

The  clouds obscured the Geminids Meteor Shower on the peak night of the 13 / 14th December. The night after (14th / 15th Dec.) Geminids could still be seen between intermittent clouds. In the early hours of the 15th (0.00 – 1.00am) and looking south, I saw 16 meteors. In a rough and ready classification these included: 11 “streaky”, 2 glowing, and 3 leaving distinct trails. Quite good viewing, before the clouds rolled in to spoil the view.

A quarter Moon will appear to be close to Mars on the 20th of January.

Use the Moon as a marker to locate the red star Aldebaran on the 23rd of January.

There is a full Moon on the 28th of January.

Mars is still a pleasing naked eye object, and will remain so throughout the winter months. A telescope will reveal a small disc, but the views are not going to be as good as when it was nearer to Earth in October 2020. Look out for it on the 20th when it will appear close to a quarter Moon.

The morning “star” shines brightly in the south-east, rising at around 6.30am and visible in the dawn sky, but later on in the month it will start to be obscured by the greater light of the Sun and will disappear from view by the end of the month.

Uranus is a difficult planet to spot, even in a dark sky it is only on the verge of naked eye visibility. However, on the 21st of January it may be possible to locate it through binoculars (or a small telescope) by using Mars as a marker. Using binoculars, the planet should appear to the lower left of Mars. You are looking for a small, greenish, dot.

(My edit – 22 Jan 2021: I observed Uranus last night (21st Jan.) and through a telescope it appears as a pale blue dot, not green – or even greenish. With binoculars it looked like a faint “star”.  This guide from the Society of Popular Astronomy was very useful  “Look for Uranus Next to Mars”.  Mars can be used as a guide to Uranus for the next couple of nights at least).

The headline image shows an infrared composite image of the two hemispheres of Uranus and its rings, obtained with Keck Telescope adaptive optics. (courtesy of NASA / Keck Observatory).

ISS can be seen the earlier hours of the evening between the 19th of January and the 26th of January. The best views will be obtained on:

Check at Spot the Station for further details and for sightings in January after the 26th.

The Derby and District Astronomical Society have moved their meetings onto zoom. Their next  main meeting is scheduled for Friday the 5th of February and will be a presentation on “Observing Nebulae”. Contact the society for further details and the zoom link for the meeting via email: secretary@derbyastronomy.org