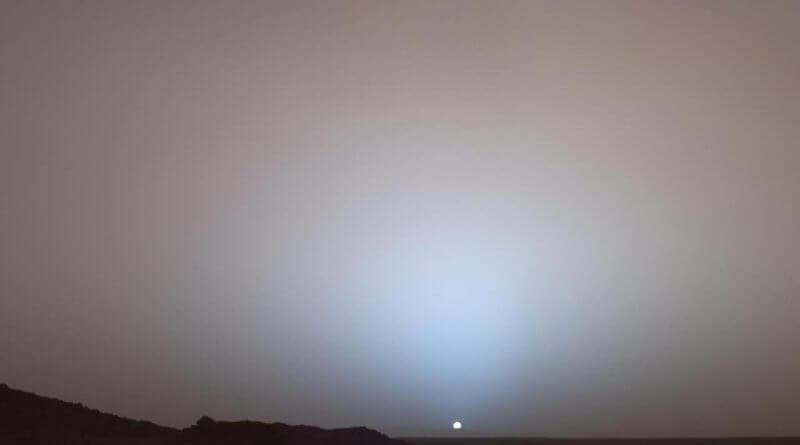 In October’s Night Sky: A very good month to view Mars; Jupiter, Saturn and Venus are all bright and visible; The Orionids meteor shower; A blue Moon on the 31st.

The Clocks Go Back.

The clocks go back one hour on the 25th of October – meaning that the UK is back on GMT and is therefore in sync with Co-ordinated Universal Time (UTC).

On the nights of the 21st and 22nd of October, look out for the Orionid meteors. Start looking from 10pm onwards and look towards Orion. The Orionids are not a big meteor shower, but on these nights you will have an increased chance of seeing a meteor. Patience and warm clothing will be needed.

A crescent Moon will appear to be close to Venus before dawn on the 14th of October.

The Moon will appear to be close to Jupiter and Saturn on the 22nd of October.

The Moon will make a nice contrast with the red planet Mars on the night of the 29th of October.

There was a full Moon on the first of October (the Harvest Moon). There will also be a full Moon on the 31st. The second full Moon in the same month is popularly known as a Blue Moon (but technically this is a modern interpretation of the rules governing Blue Moons – see wikipedia for the full debate). This Blue Moon is also on All Hallows’ Eve – make of that what you will.

Mars is resplendent in the east. It appears as a bright red “star” easily visible to the naked eye. Binoculars will resolve it into a disc, but to really see it well you will need a reasonable telescope (one capable of at least 100x magnification).

My own observations of Mars, from my backyard and with a 6.5 inch reflector on a dobsonian mount, revealed the dark patch that is Syrtis Major, a glimpse of the planet’s ice cap and, after much patience viewing, glimpses of colour on the surface – the red and green yin and yang familiar from astrophotography images. On the night of viewing, Mars was visible for long enough to experiment with filters and I seemed to get good results using a green filter on the eyepiece – but in the end I preferred the view without a filter.

Out of curiosity, I also used a small (3 inch) and cheap refractor telescope on a basic EQ mount (an impulse buy from Lidl some years ago). Mars presented as a very small disc, and I was pushing the limits of the scope at anything above 100x mag, but even in this scope I could perceive the dark shading that is Syrtis Major.

To conclude, Mars is well positioned for observation at the moment. Look to the east as soon as night falls and it is the brightest object you will see. If you have a telescope, try and get out to look during October. Although Mars’ orbit brings a “close approach” every two years (the next one is Dec 2022) Mars will not be this close to Earth again until 2035.

Image above: A Moment Frozen in Time (courtesy of NASA images). On May 19th, 2005, NASA Mars Exploration Rover Spirit captures the Sun setting below the rim of the Gusev crater on Mars.

Shining brightly, Jupiter is low in the south, moving to the south-west over the course of the evening. Visible in the early evening but now setting in the hours before midnight.

Appears to be close to Jupiter. Also in the south and moving towards the south-west. Saturn is less bright, nonetheless it makes a distinctive pairing with Jupiter early on in the evening.  A telescope will show Saturn’s rings quite easily.

The morning “star” shines brightly in the east, well before sunrise. On the 14th it will appear to be close to the crescent Moon.

The Derby and District Astronomical Society have moved their meeting schedule onto zoom. Their next “Introduction To Astronomy” evening is scheduled for the 16th of October. Contact the society for further details and the zoom link for the meeting via email: secretary@derbyastronomy.org

Up to the 6th of October sightings for ISS are as follows:

Check at Spot the Station for further details and for sightings in October after the 6th.