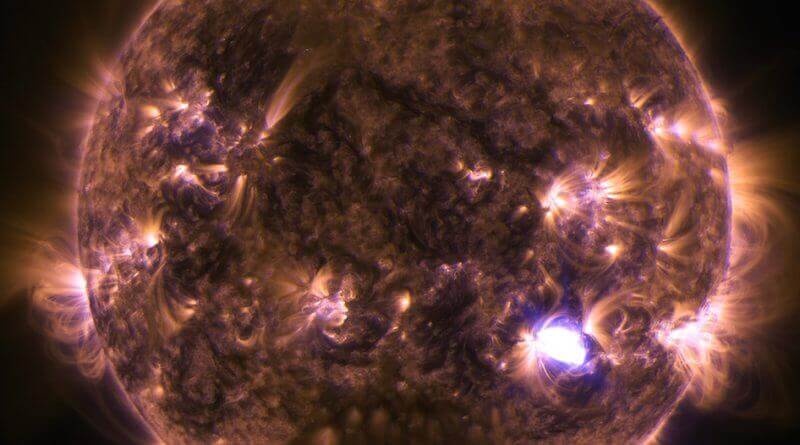 In July’s Night Sky Over Belper: Jupiter and Saturn appear in the evening, Venus moves to the morning. Another Comet? A Decade of Sun. Look out for early Perseids.

A Decade Of Sun In One Hour.

NASA has released a timelapse video of the Sun using ten years of daily images taken by the Solar Dynamics Observatory (SDO). The hour long film records a whole solar cycle. It shows how active the surface of the Sun is – and gives a powerful representation of the forces that drive our nearest star.

The film is provided with a soundtrack, “Solar Observer”, composed by Lars Leonhard. The youtube video also includes timestamps of major solar events including: Solar eruptions, The Transit of Venus, The Transit of Mercury, plasma being captured in the Sun’s magnetic fields, and large groups of sunspots crossing the solar surface.

Image above: (courtesy of NASA images). The Sun emits a solar flare, as captured by NASA’s Solar Dynamics Observatory on Dec. 4, 2014. The image is taken in ultraviolet light.

The Perseids will peak in August, on the nights of August 12 – 13th (Wednesday evening into the early hours of Thursday). But it is worth looking for them from late July onwards, from around 11.00pm. You do not need to look in any particular direction, the best views are achieved by being able to see as much of the sky as possible. Any light pollution will spoil your view – so Moonless nights are best to see Perseids before the main event in August.

Comet ATLAS and Comet SWAN (Space Is The Place, May 2020) never reached naked eye visibility. As such, I am a bit wary of mentioning Comet NEOWISE, but a comet that may become visible is always worth noting, so…Comet NEOWISE was identified by astronomers on the 27th of March, 2020. It is thought that the comet could reach sufficient brightness to be spotted through binoculars around late July (however, it may not). If it does become bright, it should be easy to locate as it will appear low down in the sky, below the bright early morning objects of Venus and the star, Capella.

There is a good report on Comet NEOWISE here: Meteor Watch: Society for Popular Astronomy.

If the comet becomes spottable, I will provide an update in the comments section.

Venus re-emerges in the small hours of the morning. Look for it in the north-east, it begins to appear from 2.30am. In the early morning hours of the 17th of July, there is a good array consisting of the crescent Moon, Venus and the red star, Aldebaran.

Jupiter shines bright and is low in the south. Look for it as darkness falls. It appears to be close to the full Moon on the 5th of July.

Saturn appears close to Jupiter. Shining less brightly, it appears low in the south as darkness falls. You will need an unobstructed horizon to see the planet at its best.

Mars starts to appear, in the east, from around midnight.

The International Space Station is an early morning object at the moment: all sightings up to the 11th of July are in the early morning.

Later on in the month there are good sighting opportunities as follows:

It is also possible to sign up to the NASA Space Station Alerts service, which gives notice of the best sightings.