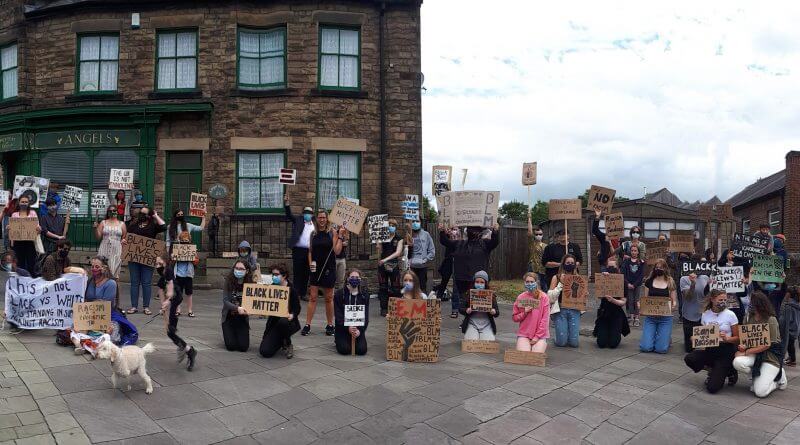 Editor’s note: This is the first article in Nailed’s 4 years which contains swearing and offensive language, but after some discussion with Nailed staff, and Belper Anti-Racism Network, I have decided to report the racist hate speech which occurred during the protest today exactly as it was shouted, with no asterisks or euphemisms.  I take responsibility for this decision, which is made so as to not hide or sanitise the abuse, and to lay it bare before the town.  Nailed is intended to be able to be read by all ages, so “parental advisory” is added to give parents the choice over whether their children are exposed to such language and ideas, but I would encourage parents to discuss the language reported here with their children, to better educate the Belper of the future.

Today a protest happened on the Marketplace, Belper, to address racism in the town, and in the broader systems of our nation and shared culture with other nations.

The protest was organised by Belper Anti-Racism Network and featured speakers from the BAME community and Belper Council, as well as some political protest songs.

The turnout was greater than any other protest which has been held in the same location.

The main speech was given by Cecile Wright, a Professor of Sociology and Social Rights from Derby who is hoping to help Belper build a social education program.

Cecile explained that the “knee on the neck” which killed George Floyd, and inspired the current protests and focus on racial inequality, has, in the form “get your knee off our neck”, become a metaphor for the everyday racism experienced by black people.  And for black people being held back in education and employment.

She said, ” What about here in the UK? Is that knee, metaphorical and actual, on the neck of British black people?  In terms of the criminal justice system, black people are many times more likely than white people to be: stopped and searched, arrested, prosecuted, convicted, imprisoned and die in custody.  Is this evidence that black lives really matter?  The racism involved in the criminal justice system is a symptom, not the cause, of systemic racism in the UK.

“Black lives also really matter when the UK wants to cut its net migration. When the UK creates a “really hostile environment”, its laws are passed in parliament almost unopposed (Immigration Act 2015). Black people become the targets for removal (Windrush Scandal). When those black people claim compensation for their mistreatment, 95% of them have received none.  Parliamentary democracy has not served black people well.  In the 1960s and and 1970s the racist Commonwealth Immigration Acts became law.  Their purpose was to restrict the immigration of black and Asian people.”

Cecile went on to discuss the lack of political representation, and its control to silence voices (no black MPs were called to ask questions during PMQs on the topic of George Floyd’s murder.)  She also spoke about representation on television and radio.  She concluded, ” Only when we look at our TV screens and there is a black presence in important toles, decision making roles, opinion forming roles, and see it no differently from a white presence can we see there has been progress.  Until then the metaphorical and real “knee on the neck” remains the norm.”

Belper Town Councillors Jyoti Wilkinson, Ben Bellamy, and Neil Ploughman all spoke briefly.  Sentiments such as “Ye are many, they are few”, and “We all stand together” were shared.

They invited those who support Black Lives Matter, and anti-racism, to work with the council to “make equality something that is real in Belper.”

Jyoti Wilkinson said, “Together we can build a better world.”

Protestors were asked to “take a knee”, in emulation of the American Football action, where players have used the move of stopping play to deny reverence of their nation when the national anthem is played, because non-white people are not an equal part of the nation.

Although photographs distort the appearance of distance, social distancing was mostly well maintained and most of the protestors were wearing face masks.

There was a counter protest at the same time in the Memorial Gardens.  The counter protest was composed of bikers and ex-service personnel “protecting” the war memorial.

Passing racists threw abuse at the protest.  These are the exact phrases shouted loudly at the peaceful socially distanced protest, as the shouters ran away:

This hate speech is one reason why the protest happened.  Belper DOES have racist elements and they are getting bolder with validation from high profile racists.  This is why Belper will see education programs, and higher profile addressing of the issue of racism from now on.

Today Belper stood to say that racism will not be tolerated in Belper.

Photos may not be reproduced without permission.

Racist comments on this article will lead to a permanent ban.   “All lives matter” comments will not be published, as this phrase is primarily used to oppose fixing inequality.

8 thoughts on “Fighting Racism In Belper (parental advisory for language)”