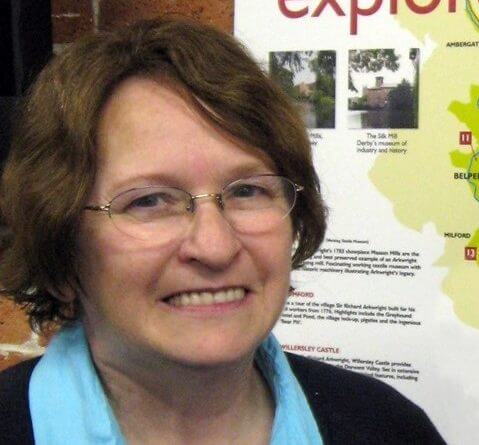 Born in Belper, Mary grew up on her parents’ farm, Manor Farm, on the town side of The Parks. She was the younger of two children, her brother Richard being several years older.

Living in the middle of Belper, Mary quickly learned to understand the town and its people. She would bring milk up to the fairground workers when they arrived back at the Coppice each autumn, and met many a Belper character as they visited her parents at the farm.

Growing up, Mary was involved with the Young Farmers, the Young Conservatives (for whom she organised a grand fund-raiser at Calke Abbey), and the Belper Division of the St John Ambulance Brigade, for which she compiled and published a history on its centenary in 1999. In its first 100 years, Mary was one of only 21 people from the Belper Division to be awarded the honour of Serving Brother/Sister in the Venerable Order of St John, the highest award, given for exceptional service, which the Brigade can issue.

Mary started at Long Row School, but on the first day they asked for volunteers to move to Pottery School to ease over-crowding. Mary stuck her hand up, so moved to Pottery! Later she went to Herbert Strutt School on passing her eleven-plus. After school, she did secretarial work for a time at Glow-Worm. When an opportunity arose to have her own milk round she jumped at the chance.

When Mary married Peter Smedley, she also became mother to his children John and Rosemary. They soon had two sons, Matthew and Richard, and Mary had to juggle a busy family life with a milk round which never allowed her holidays or time off. Through her round, Mary met so many people with stories to tell and old photographs to share. She would often borrow old photographs, copy and return them, so helping Belper Historical Society build its archive of old Belper views. Mary learned about the Belper families and heard stories that could easily have been lost as time passed.

Twice in the years that followed, Mary was consort to Peter when he was appointed mayor of the town. Her brother Richard also became a Mayor of Belper.

When a meeting was advertised in the winter of 1994/5, looking for support for a museum in the town’s North Mill, Mary decided to attend. She didn’t feel there was enough to say about Belper’s heritage and a museum wasn’t needed. The meeting proved to be a revelation for her. With the zeal of a convert she decided to become involved in the setting up of the Derwent Valley Visitor Centre (later known as Strutt’s North Mill) and threw herself into promoting and supporting this new venture.

Before long, Mary had applied for the role of manager at the North Mill, and on being appointed, she sold her milk round and immersed herself fully in making the North Mill the best possible visitor attraction. She took evening classes in order to achieve a teaching qualification and went on a series of museum-related training sessions, absorbing all the information she could. Working with a strong and enthusiastic group of volunteers, Mary made an outstanding success of the North Mill, with growing numbers of visitors, including school groups. Included in those volunteers were her husband Peter and son Richard, who she would draft in to help with odd jobs, and Mary put in many extra hours in order to have the mill running as she wanted it.

During her time as manager, Mary helped build the twinning links between Belper and Pawtucket, Rhode Island, USA and visited Slater’s Mill in Pawtucket with a group of the mill volunteers.

She also set up the first heritage walks in the town, which are now weekly each summer (although not at present, for obvious reasons). The first Boxing Day heritage walk she organised, in 2003, attracted 104 people (she drafted in two extra guides at the drop of a hat – they were very loyal) and the walks continue to be popular to this day.

Mary stepped down as manager in November 2008 after over a decade at the helm. Having been so close to the job for so long, she stepped away for some time, and became more involved in other things, including the management structure of the Derwent Valley Mills World Heritage Site, where she was an active member of the Technical Panel. Still, when there was a gap between managers, Mary returned to the role with gusto. She then became a member of the Belper North Mill Trust, which holds responsibility for the running of the museum.

As part of her voluntary work for the World Heritage Site, Mary was invited to be a guide for George Herbert Strutt’s granddaughter Lin Ryan, and husband Michael, on their first visit to Derbyshire. This led to an opportunity for Mary and Peter to visit them in Ireland during May 2010, in order to interview Lin’s mother Bridget, the youngest daughter of George Herbert. Mary admitted later that as they arrived, she was apprehensive that, having lauded the Strutts all her life, Bridget may not be how she’d imagined. As it was, Mary said she needn’t have worried – she couldn’t have had a warmer welcome, and interviewing Bridget was one of the happiest and most fulfilling moments of her life.

After many years as a member and a committee member with Belper Historical Society, Mary became secretary, then – on the society’s 60th anniversary in 2017 – chairman. This gave her an opportunity to modernise the organisation and encourage others to get involved, as she had done at the mill. By the time she was forced to step down through ill health two years later, the society membership had grown to its largest ever, and been forced to move into the hall at the Strutts Centre, the only space big enough to take so many. She oversaw work to make the society’s archives more accessible and production of the society’s first book in nearly 20 years. All the research she did, and photographs she copied, are now part of the society archive.

Mary was unique in the town for being able to overlay an exceptional understanding of the town’s history with knowledge of its people, many of them from the families she served during her working life. Having lived in Belper all her life, she was able to piece together and make links in the ‘jigsaw’ of Belper’s history, and rather than keep that to herself, she passed her knowledge on in a way that engaged and helped people to understand. She inspired others to expand on her work, and helped instil self-confidence in the many people she persuaded to become guides at the mill, where her influence and support made a huge difference.

Having lost Peter three years ago, Mary had then faced major heart surgery and overcome it, only to be diagnosed with cancer, which she faced with her usual stoicism and courage. After a long fight, she died peacefully in her sleep, at home, surrounded by her sons, on the night of Sunday 5 April.

Because of the dire situation the country is in with the Covid-19 Pandemic, Mary will not be having a public funeral, but when restrictions are lifted, it is hoped there may be a way of recognising her substantial contribution to the town, its heritage and the many organisations who benefited from her time and energy.

Her family have asked that whilst they understand people wanting to send sympathy cards, they know Mary would not have wanted people to have put themselves at risk by going out to buy, post or deliver cards in the current circumstances.

Postscript from Adrian Farmer: I can honestly say Mary changed my life. She took a relatively shy 34-year-old, badly lacking in confidence and with no ability at public speaking, and forced me to become a guide at the North Mill. She showed me I could speak to a group, give tours in the mill, then give full-on talks. She took my interest in the history of Belper, threw a whole lot more of it at me, and fanned it into something so much more – a staple of my life. She was a phenomenon, working tirelessly for the benefit of the town and its heritage, and we were lucky to have her. Goodbye Mary, and thank you.