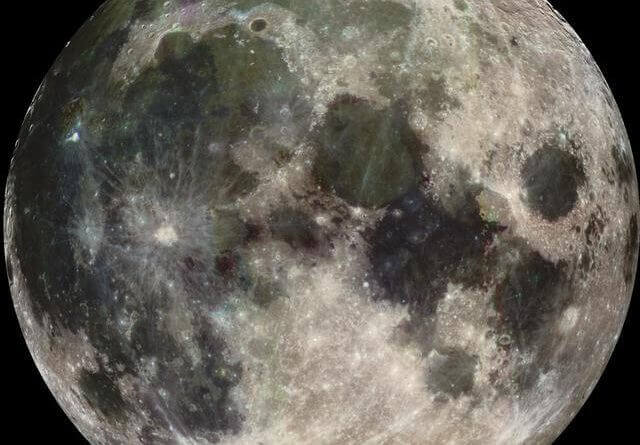 In the Night Sky Over Belper, April’s highlights include:  A bright full Moon on the 7th-8th. Venus gets brighter. The Lyrid Meteor shower. An approaching Comet.

For most of us astronomy is an outdoors pastime. The more gregarious of us will gather at dark sites and will congregate at star parties, observing sessions and evening meetings. Obviously none of this is possible during this period of lockdown. Government guidelines advise no unnecessary travel and people are limited to the confines of their house and gardens. Please follow the spirit of the government guidelines in pursuit of your hobby. Keep safe and respect the safety of others.

During this time of lockdown observers will have to be content with viewing the shower from their own gardens, as visits to dark sites etc. are likely to be in breach of the government guidelines regarding necessary travel.  However, observing conditions will be good (if the clouds stay away) as there is no Moon in the sky at the peak of the shower.

The shower will peak on the night of Tuesday 21st, going into the early hours of Wednesday morning. The peak rate is given at 15-20 meteors per hour – but expect to see a lot less than that. Patience will be needed when observing. Look up and towards the northern part of the sky, from 11.00pm onwards.

Astronomers are anticipating a comet which is predicted to reach naked eye visibility towards the end of May. The comet, designated C/2019 Y4 (ATLAS), has been spotted by astronomers in the UK – but it is currently very faint.

Comets are very unpredictable so all predictions are estimates to a degree. Comet ATLAS is predicted to be at its brightest around the 21st of May.

Comets are diffuse objects – in a telescope  they appear as hazy blobs – and it is not known whether this particular comet will develop a tail but, if predictions are correct, the comet could turn into a good binocular or telescope object for the casual observer.

There is a bright full Moon on Tuesday the 7th of April moving into the early hours of Wednesday morning (the brightest this year).

It is also a supermoon and, if you like this sort of thing, it has been named “The Pink Moon”. Don’t expect the Moon to turn pink. It is called the Pink Moon as it, supposedly, heralds the early pink flowers of spring.

The crescent Moon on Sunday the 26th of April will appear to be close to the planet Venus. Venus should also be in a crescent phase at this time – so a good observation to be made if you have a small telescope to hand, and have a view to the west from your garden.

Venus is visible all night and is very bright, reaching its maximum brightness for this year on the 28th of April. It will appear close to the crescent Moon on the 26th of April and will be in a crescent phase itself. A nice pairing for small telescopes.

Mars, Jupiter and Saturn are all early morning objects, hanging low in the sky. Look towards the southeast horizon before dawn to see them.

Between now and the 14th of April there are some opportunities to see the space station:

On Thursday the 2nd of April, at exactly 8.48pm, look towards the western horizon. The ISS will be visible for about 4 minutes.

On Saturday the 4th of April, at exactly 8.50pm, look towards the western horizon. The space station will be visible for around 3 minutes – although it is lower in the sky on this date.

Check Spot the Station for further details and also for sightings after the 14th.