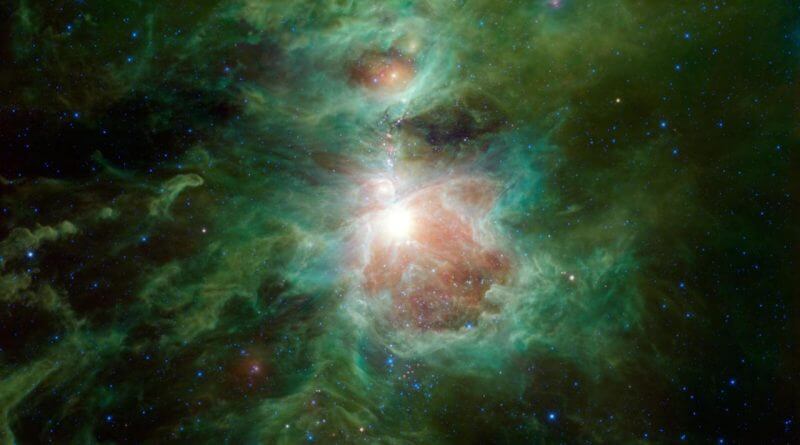 In the Night Sky Over Belper: Venus dominates the early evening sky. Mars appears low in the morning sky before dawn. Look out for the Starlink satellites. Find the Orion Nebula.

In January I remarked upon the Starlink satellites. These are being deployed by SpaceX to create a high speed broadband network with global reach.

Late January provided good sightings of the Starlink satellites in procession. The satellites were clearly visible to the naked eye and, on one sighting, I observed up to 30 passing along the same trajectory, over a period of about 10 minutes. (approximately one every 20 seconds). It was an impressive sight.

By February, Starlink sightings had moved to early morning (5.30am onwards). The satellites seem to be orbiting across the UK in a 5.30pm – 7.00pm timeslot in the evenings, and a 5.00am – 7.00am time slot in the mornings. It therefore appears that, as the days get longer, there will be less opportunities to spot the satellites.

The Starlink satellites are initially close together because they are being launched in batches of 90. They will manoeuvre into their final orbits over the course of the year.  As such, the further away from their launch date, the further apart the satellites will seem. Regular launches are planned, and the next launch (Starlink 5) is scheduled for the 15th of February.

To identify which Starlink satellites will appear close together (i.e. with around 10-30 second intervals between sightings) it is best to use a satellite tracking website (or an app) like Heavens Above.

At the moment spotting a procession of Starlink satellites feels like an event, however, SpaceX plans to launch 12,000 of these satellites over the next 5 years. What we are witnessing is the beginning of a massive space engineering project.

Astronomers, both at the amateur and professional level, are already expressing concerns about the extent of the project and the possible implications for astronomy. I will be exploring these concerns in more detail over the next couple of articles.

Orion is one of the easiest constellations to find. Look south and look for 3 stars in a horizontal row (this is Orion’s Belt). From this anchor point you should be able to identify a box of stars around the belt. From the observers point of view: in the upper left corner of the box is the red star, Betelgeuse. In the lower right corner (diagonally opposite) is the bright blue star, Rigel.

Hanging down from Orion’s Belt is a line of three fainter stars, these form Orion’s sword. With Binoculars (10 x 50 are best) find the central star in Orion’s Belt. Scan down and you should be able to find Orion’s sword. In the middle of the sword will be the Orion Nebula. You should be able to see a bright area of stars surrounded by a hazy glow (nebulosity). A telescope will provide further detail, revealing 4 very bright stars (known as the Trapezium) at the centre of the nebula. The nebula itself is a vast cloud of dust and gas illuminated by the newly formed stars at its core (see image above, courtesy of NASA).

Venus shines ever brighter. It is easy to spot, dominating the western part of the sky in the evening and setting around 10.00pm. Venus will appear to be close to the crescent Moon on the nights of the 27th and 28th of February. A telescope will show that Venus is now in a three quarters phase (a bit like a waxing Moon).

Mars can be seen in the morning hours, appearing before sunrise in the south-east. On the 17th of February, Mars can be used to locate the Lagoon Nebula (binoculars or a small telescope should show a small, fuzzy patch slightly below the planet). However, an unobstructed horizon will be needed, as Mars is very low in the sky at the moment.

If you have a low south-east horizon, you will be rewarded with a pleasing line up of three planets. Mars is highest, then Jupiter, and then Saturn (very low). You will need to be out of bed by 6.00am to see them.

Only one sighting over the next couple of weeks. Look for the space station on Sunday the 22nd of Jan at 5.39pm (low in the south west) . It will only be in the sky for a minute. Check Spot the Station for further details and for sightings after this date. You can also sign up to the NASA Space Station Alerts service which gives advance notifications of sightings.

Spot the Station is also giving details for sightings of the CYGNUS supply vehicle on February 9th, 10th, 21st, 22nd and 23rd of February (go to the website for precise times). My own experience of trying to spot CYGNUS has not been good, binoculars may be needed for a successful sighting.

One thought on “Space Is The Place: The Night Sky Over Belper, February 2020”