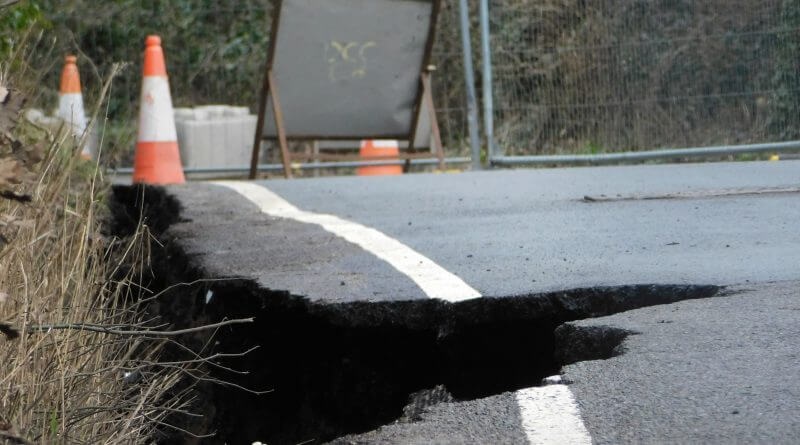 A Derbyshire road, well-known as a rat-run to avoid busier routes, could be closed until July 2021 following a landslip.

A 45-metre section of Lea Road, between Cromford and Lea Bridge, crumbled away towards a nearby riverbank in January.

It is believed to have been caused by heavy flooding across the county in November.

Damage across the county is believed to cost £20 million to fix – on initial estimates.

The route, often used as a rat-run by motorists wishing to bypass the busy A6, has been closed by Derbyshire County Council.

It initially said the route could be closed for “many months” but its orders, put in place to formalise the road closure, say the road could be shut until Friday 9th July 2021.

The authority says that access for homes will be maintained “whenever reasonably possible” and that the road would reopen “as soon as the work is finished” which “may be earlier than advertised”.

A large chunk of tarmac which had been hanging on to the road, after the ground gave way underneath, has now fallen apart since the route was first closed off, suggesting the damage could still spread further.

Fencing and concrete barriers have been put in place to block off the damaged section.

More earth seems to have given way underneath the road, causing a considerable section to overhang without any support.

Local residents say that the closure has been both a blessing and a curse – taking away traffic but making it more burdensome to get to Wirksworth and Matlock bath.

They say a substantial amount of engineering will most likely be required to prop the road back up and prevent a further, potentially more substantial landslip from happening again.

An elderly resident, who has lived in Lea Bridge for 20 years, but did not want to be named, said: “It is obviously inconvenient if you have to go to Cromford or Matlock but the advantage of it is no more constant stream of traffic for people bypassing the A6.
“It is a blessed relief.
“We have all been told it will be closed for the foreseeable future. I think it will need a fairly substantial piece of engineering to be put in place to hold up the road. It will continue to fall away if we continue to have high river levels.
“This might be an opportunity to put some sort of pinch point in to improve traffic.
“The closure has put more pressure on the Robin Hood road down to Whatstandwell, the official diversion is up to Crich but people are cutting that off.
“Traffic down Robin Hood will not be sustainable in the long run.”

Lindsay Steele, who has lived in Lea Bridge for 25 years, says the area has never flooded as much as it has recently.
She said: “It is extremely frustrating really, it (the closure) is making life very difficult in the sense that if you want to go to Matlock, you have to go up to Tansley.
“If you want to Wirksworth or Matlock Bath it is a long way around. People are using Robin Hood instead to get down through Whatstandwell and that road is not in a good state with lots of potholes and puddles.
“The road surface is terrible and with the amount of traffic it is now getting, it is nearly unusable. It too will need repairing and then it will be closed as well.”

A spokesperson for Derbyshire County Council said: “We’re aware that Lea Road being closed due to a landslip is really inconvenient for many people. It is not safe for anyone to use the road as a large part of the steep bank that supports it is still moving.
“We are currently doing some work to stop the slip from getting any worse, and have asked specialist contractors to carry out a ground investigation to find the cause of the slip. This work will include them doing some boreholes.
“It is only when this work is complete that we will then be able to come up with a plan to fix the damage properly,

which means that unfortunately, we do not know how long the road will remain closed.”