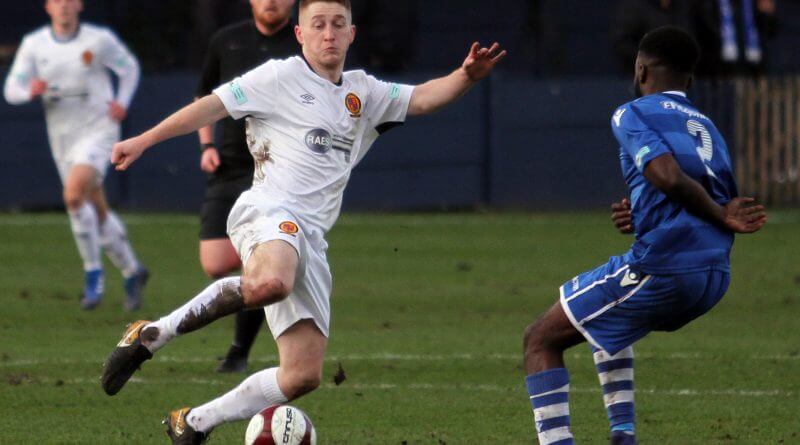 Belper Town were on the brink of an excellent victory but conceded in the very last minute of this hard fought game at Kidsgrove, and in doing so dropped two vital points.

With promotion rivals Cleethorpes and Stamford both losing their games last weekend, it was particularly frustrating that after battling their way to a deserved lead, a moments loss of concentration in the final seconds forced them to share the points. Until that point the Nailers had been excellent despite falling behind to a 5th minute super strike and their recovery from such a set back was inspirational.

Grove had only been beaten once since November and their starting line up included former Belper players Lee Williamson and Ruben Wiggins-Thomas. Belper manager Grant Black opted to leave Derry Robson and Nathan Curtis on the bench with Evan Garnett and Danny Gordon starting instead.

The hosts started at breakneck speed and the Nailers had barely time enough to get to grips with Grove when Rhys Thomson struck a fierce low drive that squeezed just past Ryan Musselwhite and his right hand post after only 5 minutes. Lee Williamson had a 9th minute effort well saved by Musselwhite on his goal line, however the Nailers began to grow into the game and were unfortunate not to grab an equaliser in the 17th minute when a frantic goal mouth scramble saw the ball eventually being put out for a corner.

Within seconds of the corner kick being taken the ball was cleared for a Belper throw and George Milner launched it deep into the Kidsgrove box where Danny Gordon was in the right place to head the ball into the net after it had bobbled around the six yard box… The Nailers had got into their stride and a strong run from Evan Garnett in the 27th minute saw his cross shot cleared by Rhys Thompson as the ball was heading into the net.

George Milner took advantage of hesitancy in the Grove defence and he cut inside to unleash a fine shot that Kieran Harrison punched away, then the ‘keeper touched over a Milner free kick on 35 minutes. The Nailers finished the half strongly and might have taken the lead when Evan Garnett’s cross from the right was met by Sam Wright, but his outstretched leg sent the ball the wrong side of the post.

Initially the Nailers started the second period well but were given a warning on 56 minutes when Lee Williamson’s shot was well seen by Musselwhite, and moments later he struck a volley that bent just wide.  Belper caught the hosts on the break in the 72nd minute with Garnett finding Derry Robson in space on the edge of the penalty area, and he picked out Alex Peterson unmarked, who scored with a well placed shot from 12 yards.

Belper went all out for a third goal but it never came even though George Milner’s overhead kick went close and there were many other promising situations that didn’t work out for the Nailers. Kidsgrove never gave up trying for an equaliser and they almost got it in the 89th minute when a header from a corner kick was saved on the line by Musselwhite.

With game in its final throws of added on time, Belper conceded another corner and in a carbon copy of the previous one, the ball arrived at the far post where Anthony Malbon gleefully struck the ball from close range high into the net for the equaliser.  It was a bitter blow for the Nailers who had put everything they had into the game and the feeling afterwards was that this was a case of two points dropped rather than one gained.