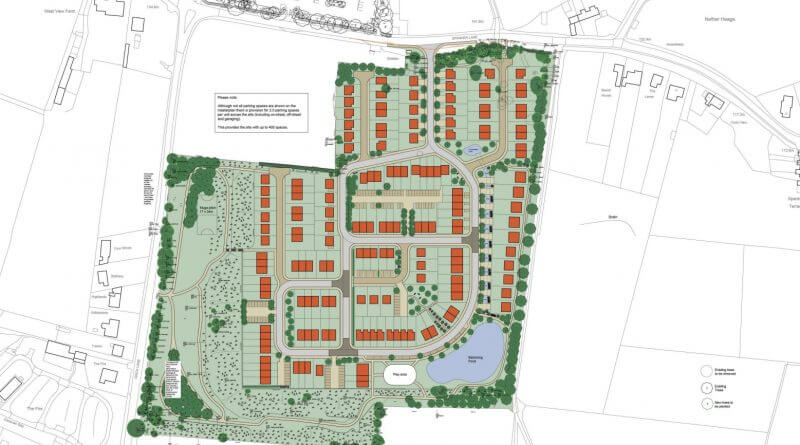 Plans to build scores of homes on a former industrial estate near Belper are back on the table again.

This comes 10 months after the previous administration of the borough council initially approved the plans – then for 175 homes, including play space in the green belt – and four months later, following a council flip to Labour in local elections, recalled the plans and instead refused them to protect Green Belt.

The to-ing and fro-ing over the scheme came as a result of a change in administration at the borough council, from Conservative to Labour in May 2019, with Labour vowing not to allow any development in the green belt.

Residents were also anxious about the impact the development would have on the village and the safety of schoolchildren walking along its roads – which are said to be dangerous.

Now, Garner Holdings is back with a new application which would not see any development in the protected green belt, with its planned play area and balancing pond, to offset flooding, moved.

A previously-included community building has also been removed – which councillors had said was an unnecessary part of the scheme.

It also says that it is currently appealing against the refusal of its initial plans, for 175 homes and a section of development in the green belt. The applicant is making a full claim for costs.

The developer says: “The applicant is appealing this decision which we believe was made by the planning board without giving full and appropriate weight to the planning merits of the application.
“The applicant is making the appeal with a full claim for costs.
“However while the appeal is progressed, the applicant is willing to amend the scheme to address members’ principal concern over the use of green belt land, within the application site area, address concerns over the scale of development and to make some other amendments to address points that were raised.”

The Firs Works had previously been the home of LB Plastics and other industrial businesses.

However, during the Second World War, there was a prisoner-of-war camp on the site, known as Camp No. 58.

The applicant’s plans would see 48 affordable homes built on the 22-acre site, with the remaining 112 being private homes on the open market.

It says that the scheme “will help to meet the future housing needs of the borough”.

The developer intends to make contributions to create more school places at Heage Primary School and Swanwick Hall School as part of the proposals – as had been the case with the previous application.

It also intends to make contributions to sports facilities in the area and for local public transport improvements.

If approved, the site would have 400 parking spaces at an average of two spots per house, and a multi-use games area.

The site would make use of the existing entrance off Spanker Lane.

An apartment block would also be built to the west side of the scheme, away from the road.

The developer has said in a statement submitted with the application that the council is in a “weak position” to refuse permission for houses on the site.

This, it says, is due to the lack of a local plan – blueprint for future development – to earmark certain sites for future homes, and that the council has listed the site for housing development on its brownfield sites register.

However, the council has fully identified its 5 year housing supply, which is what allows it to control building applications. If inappropriate, it is not assured.

The developer also says: “This planning application reduces the level of housing on the site, removes any green belt land and offers the council the opportunity to reconsider its decision.
“The applicant wants to build a good working relationship with the council and its members.
“Whilst he is disappointed by the decision in September and has submitted an appeal, if the council is willing to support this more limited scheme then the appeal can be withdrawn.
“The reduction in the numbers of houses reduces concerns regarding the impact on Nether Heage by the scale of development proposed.”

Plans will need to meet the increased social housing and supporting infrastructure now demanded by AVBC.