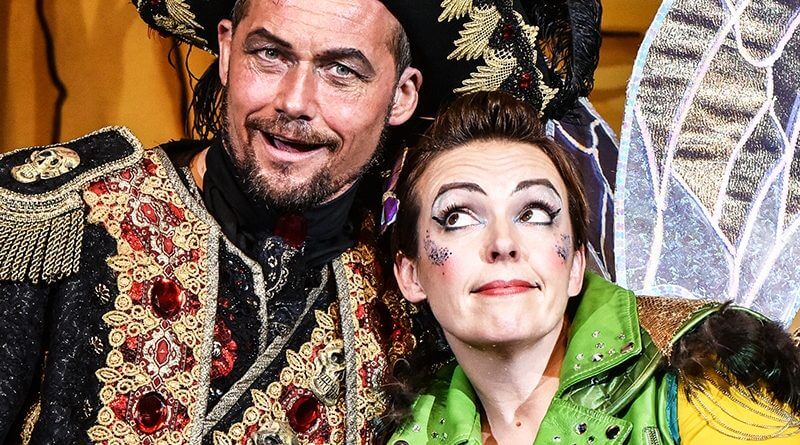 When Clare (editor) put a shout out for a family to review the local pantomime, Peter Pan, in Derby, obviously I was going to volunteer – I love a good slapped thigh and saucy joke, and it’s always lovely to see it from front of stage.

Apart from the torrential downpour on the way there (which left me wondering if we were actually going to get stuck in a flash flood and not even make it) arriving was a smooth operation. There was a steady stream of traffic moving freely into the car park to plenty of parking spaces.  The children and I were dropped off at the door to save us getting drenched and the parking attendants had no problem with that.

The foyer was busy, but there were plenty of spaces and the counter for getting a drink and sweets, no big queues.  I assumed it was because it wasn’t sold out, but most of the seats were filled inside which filled me with hope for a rowdy crowd.

The live music was provided by a 3 piece band nestled in the front of stage, wearing pirate costumes, getting into the spirit of things.

Although pantomimes are rather cringy, other than starring in them myself over the years, I only started going to them once I’d had children, so more often than not I find myself watching them through the eyes of my kids. So watching my daughters face as the snow began to fall over the audience was a beautiful sight, truly magical to a 3 year old.

The pantomime was opened by Tinkerbell, played by Katrina Bryan or as I prefer to call her Nina from Nina and the Neurones.  Jokes were predictably awful, yet shockingly funny, with lots of references to Brexit and lying politicians. Captain Hook/Mr.Darling was the ex Coronation street/Emmerdale actor Bill Ward. He didn’t make a great Mr. Darling, but he was much improved as a baddie with Hook.  The mermaid/Mrs Darling was played by Abigail Finley.

As with all pantomimes, the Dame made the show.  It really is arbitrary who plays the main parts in pantomimes, but if you don’t have a good dame the show is a flop. The dame this year didn’t disappoint. Played by Morgan Brind, three quarters of the show’s budget must have gone on his costumes, and almost every scene change produced a new and more elaborate outfit for Dame Hilda.

A couple of times there were sound issues with the microphones, either not being switched on or weird feedback. It didn’t make much difference to us on the 4th row from the front, as we could still hear what was being said, but despite being so far forward we could also still hear the music pumping out from the gym at the back of the arena, which made me feel for the people at the back where it must have been very loud.

The music was a brilliant mix of old and new tunes, meaning everyone could sing along to at least one song, there was a lot of ‘Greatest Showman’ in there and some old very popular pop songs, plus some rather new tunes.

The children really enjoyed it. There was not much audience participation though. I fear I may have been the loudest shouting embarrassing mummy there, even the grumpy other half was laughing at some parts.  The unsung heroes were the children dancers, they always had fantastic choreography, great enthusiasm, and smiles.

There were fantastic special effects throughout the show, including a great UV underwater scene and of course the flying from Peter Pan and Wendy. There was a long list of morals at the end of the story, and a rather laborious and embarrassing shout out section at the end while the rest of the cast were getting ready for the finale. 3 hours is a bit long for little ones, but the rows were very spacious, so there was plenty of room for them to wander between parents and wide enough to not disturb everyone when a toilet break was required. All in all it was a rather enjoyable show for a mixed age family, jokes to suit all ages, and a lovely feel good feeling as we left the Arena.

Peter Pan in running until 4th January, showtimes are 10am, 1.30am, & 7pm
You can find out more about the cast HERE
Tickets are available from Derby Live