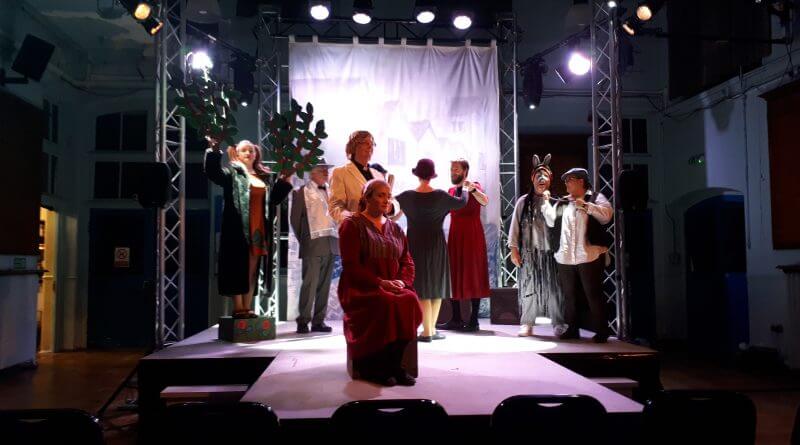 On Wednesday evening I went to see the rehearsal of “The Butterfingers Angel, Mary and Joseph, Herod The Nut, and The Slaughter Of The Twelve Hits In a Pear Tree” by Belper’s newest amateur theatre group, Captive Audience Adults. The play opens tonight, 12th December.

The play, by William Gibson, is directed by Simon Tomlinson.  This is the very first production to be presented by the new adult group of Captive Audience.  The Children’s theatre group, recently gave us a stunning hit with Romeo and Juliet. This adult group is almost entirely new to acting, and for many of them this is their first time on stage in front of an audience.

Unfortunately the nonovirus which has been doing the rounds of Belper, hit the cast, which has stopped them from rehearsing all together until Wednesday night for Thursday night.  I feel for them.

The rehearsal showed a potentially very funny version of the navitity.  Director Simon Tomlinson plays Mary’s donkey, and is by far and away the star of the show. Mel Hall as Mary has got a well polished and enjoyable performance, as has Clare Mullen as Tree. Sheila Sly, Jay Carr and Jayne Nelson play multiple roles and are perfect in them.  Those struck down by illness are rushing to be confident in their lines, which there were problems with during rehearsal, but nevertheless revealed the comedy with many laughs.

What’s the play about?

“Mary and Joseph have a rocky start to their relationship.  They are not sold on following the traditional path of marriage and children.  They wrangle over the situation, and a helpful Angel assists in the situation to ensure that they make it to the inn in time for the birth.  With the addition of a talking tree, sheep and donkey,  a few kings, an evil Ruler, and some familiar Christmas carols, we celebrate the festive season with a lively portrayal of a Biblical event.”