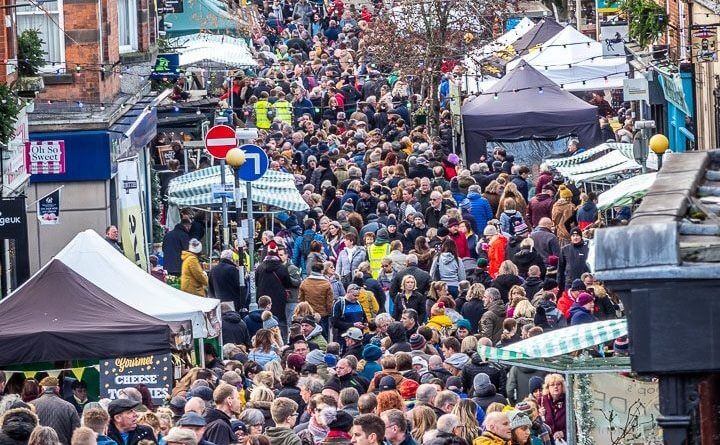 With only days to go before the General Election, we didn’t have time to get a writer down to Winter Food Festival this year.  Thankfully Jim Bell was there to take photos.

We did get some predictable feedback that it was the same as usual, but less busy than in the summer, and suffering from the lack of music (although it might be a bit much to have people performing outdoors in this cold).   It always being the same is one of the reasons we were able to skip it.

So we have a challenge for Belper-based food businesses …

Derby has its pauper Savoury Pudding, Sage cheese, and a Derby man invented the hot dog (after leaving Derby for the US).
Bakewell fights about who made the first Bakewell pudding, and ignores its Tart. And Bakewell still makes Tharf cakes, which were once countywide.
Wirksworth has Thor Cake.
The Peak gives us Lumpytums.
Ashbourne has its own gingerbread.
Glossop has Melandra bread, named for the Roman fort with modern ingredients.
Buxton Pudding comes from that high hill, and brings a blue cheese with it.
Dovedale gives us Dovedale blue cheese.
Derbyshire in general gives us oatcakes, that marbled lemon curdy Derbyshire Pudding, Fidgety Pie, & Soda Fruit Loaf.

How about we make our food festivals into a contest to find a Belper food?  We can still have the stalls from outside Belper but our Belper eateries and food producers could compete to win and retain the honour of the favourite food through public voting. If one keeps getting it, that’s our Belper food.

Excited we would rush down to try all the different delights.  Is this the food that people will crave?  Is this our special treat?  Nailed would happily arrange a ballot box and voting slips if fooderies are willing to take part.

One thought on “Winter Food Festival”