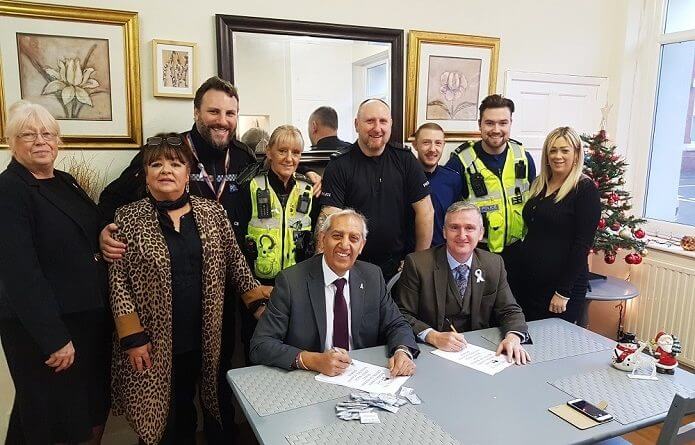 Charity volunteers backing a national campaign, urging men to declare their commitment to ending violence against women and girls, have the support of Derbyshire Police and Crime Commissioner Hardyal Dhindsa and DCI Brian Bilby, Derbyshire Constabulary’s lead for domestic abuse.

Support charity Salcare, which provides a one-stop shop of help for vulnerable residents in the Amber Valley and Erewash area, invited the Commissioner to sign a personal pledge never to commit, condone or remain silent about violence against women as part of the annual White Ribbon Day activities on 23rd November.

White Ribbon Day is organised by the White Ribbon Campaign and is the largest movement of its kind in the world, calling on men to publicly announce their abhorrence of violence against women. It is also known as the International Day for the Eradication of Violence against Women.

The event, which raises awareness of all forms of violence against women and girls, sees supporters wearing white ribbons in a symbolic gesture of support for the movement.

Mr Dhindsa, who has previously signed the campaign’s promise, renewed his pledge at Salcare’s base in Heanor and has praised the team for their work providing advice and specialist help services for the vulnerable including many victims of domestic abuse and violence.

“Salcare plays a vital role in the community, helping to safeguard survivors of domestic violence and their young families through its ESCAPE programme and giving them the support and opportunities necessary to rebuild their lives,” said Mr Dhindsa.

“I’m very proud to sign the White Ribbon Day commitment once again and raise awareness of their work.

“Protecting women and girls from violence is one of my top priorities as Derbyshire’s Commissioner and many of the projects I fund aim to help survivors recover from their experiences and break the cycle of abuse in the long-term, providing positive strategies to reduce the risk of future harm.

“Violence affects women and girls of every age, gender, class and background. Nobody deserves a life of fear and I wholeheartedly support those men who have made a step against violence as part of this year’s White Ribbon Day. I hope their voice encourages many more women and girls to come forward to police and seek help from fantastic support providers like Salcare, who are not only experienced listeners but can provide the necessary support to move on positively.”

DCI Brian Bilby said: “I see on a day-to-day basis the devastating impact the abuse perpetrated by men has on women and children across the county, region and country.

“I lead the response to this violence in Derbyshire and our specialist teams help protect victims, bring those responsible to justice and ensure that survivors of abuse, as well as their families, receive the correct support to help them close that chapter and begin anew.

“The work that Salcare, and organisations like it across Derbyshire, provide is absolutely essential and it is a source of great comfort to me knowing that survivors have caring, professional people like those employed by Salcare to support them.

“I hope there will be time when the signing of this pledge becomes a thing of the past – until that time I, as well as every officer in the county, am committed to ending male violence against women.”

Salcare has been part of the Heanor community since 1977 and helps anyone in need whether they have been referred by social services, the police or domestic abuse services.

Dena Osborne, head of service at Salcare, said: “Raising awareness of violence against women and girls by wearing a white ribbon is a way that men can show their support; and by signing a pledge not to commit acts of violence reinforces the message.

“At Salcare we support all victims of domestic abuse but on this day we focus on acts of violence against women and girls.”

The charity works in partnership with other agencies to provide support and help to families facing hardship and other social challenges. Among its many services is free benefit advice, a community kitchen, a furniture and clothing warehouse, a laundry service and an emergency food bank.

Salcare’s ESCAPE project works in conjunction with other agencies to support families to make changes to increase their safety. The charity has an Independent Domestic Violence Advocate (IDVA) who can work with those who are at high risk of significant harm.

Definition of Domestic Violence used by all official bodies:
Any incident of controlling, coercive or threatening behaviour, physical violence, or abuse, between those aged 16 or over who are or have been intimate partners or family members, regardless of their gender or sexuality.