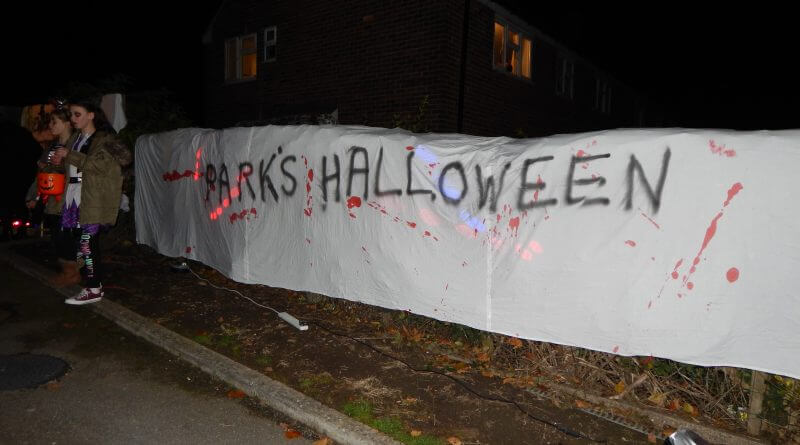 On 31st October, George Lowe’s Parks Halloween Show set up for its 4th year, this time with the difference of fundraising to support Finley, a local child battling Acute Myeloid Leukemia, with all funds going to the #FightforFin campaign.

George organises the event, which occurs outside his house, to provide a fun safe way to enjoy Halloween, besides just trick or treating.  Trick or treaters circle around the Parks estate and end up at George’s house, near the shops on Chestnut Avenue.

There were 2 raffles, one for a holiday donated by Paul Terry, and 1 to win 2 expensive hampers full of booze and treats, donated by other members of the community.  There was also a tombola, which was so popular that it ran out of prizes early on and was restocked with the plentiful supply of sweets which had been donated by the community.

All told, after a videoed public count up of the money raised, and additional donations by organisers, the total money raised for Finley was £1000, £808 coming from the takings of the night.

There was a fire eater and juggler performing on the green.  The evening was relatively quiet, with no fireworks or music, but the atmosphere was different to the more officially organised events of the town.  There was a comfortable, calm community atmosphere to event, harking back to older days.  A natural community which lives together coming together on the streets where they live, without stages, or wristbands, or speeches from bodies with names.  It was different.

This was the first assignment of our new Youth Photojournalist, Imogen Carr.  All photos are Imogen’s unless marked with a *.  Click to enlarge.

One thought on “The Success of The Parks Halloween Show”