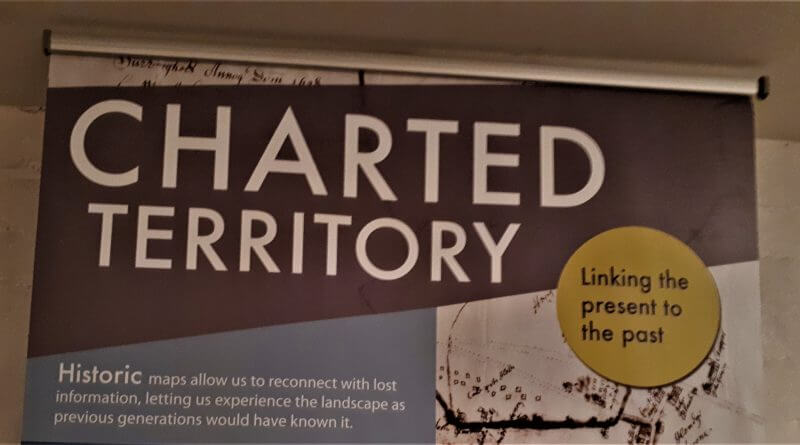 Friday night saw the preview of Charted Territory: A Colourful History of the Derwent Valley, a new exhibition of historical maps of the local area.

The project, the digitisation of maps of land within the World Heritage Site, was the idea of Adrian Farmer, after being inspired by an exhibition in Scotland.  The maps in question are housed at the Records Office in Matlock.  They are mostly focused on Belepr and Milford due to the Strutts’ fascination with mapping the area.

Some of the original maps are the length of a ruler and some are huge beyond what anyone would expect of a map, the largest being over two metres in length.  They date from the 1775 to 1936 with the majority being from the 19th century. 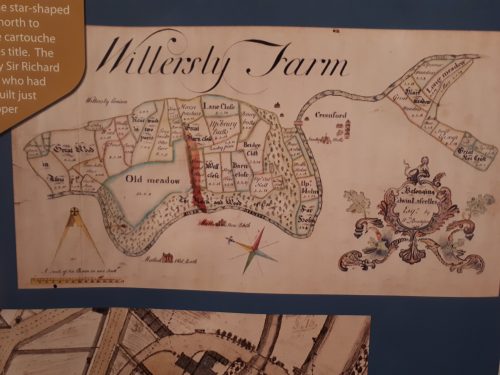 The exhibition, and an online exploration portal, are designed to illustrate the purpose of historical mapping, along with both scientific and artistic features.   The historical maps being quite different to the very precise and standardised maps which we are used to today.  They show how maps changed and evolved as people’s understanding of our world grew and vice versa.

Similarly, as the Records Office learns more about maps of the area, the resource of the map portal will grow and improve.  People can already use the portal to overlay a number of historical and modern maps, revealing usually invisible history of the current town, including rude namings and lost architecture.

There were three short speeches as introduction to the exhibition.

Councillor Robert Flatley, County Council Cabinet Support Member, Strategic Leadership, Culture and Tourism spoke of the 2 year project to improve access to heritage and art via the 20 projects in the Great Place Scheme which aim to embed arts and culture into heritage sites.

Sarah Chubb, Archive and Local Studies Manager of the Derbyshire Records Office (Matlock) told guests that it was a complex project which had been worked on by volunteers who studied and identified the features of the maps.  She highlighted that the Records Office is for the public to learn more about their areas of interest, not just for serious research.  She described the work as “a labour” to emphasise the hard work put in by all involved, and named Records Office staff Becky Sheldon and Karen Millhouse as crucial to the project.

She told of how the exhibition will grow and build, and also how it will move around locations in the valley to ensure that as many people as possible can access it.

Adrian Farmer said that he was “very excited about this project.  More excited than anything else for a long time.”  He explained how there had been a project intended to be part of the Great Place Scheme events had fallen through and that there was space for a new project, which provided the opportunity to do this work.

“The maps that we have down the Derwent Valley are astonishing,” Adrian said, “for the detail in particular.  We’ve found another ice house that we never knew existed.”  The maps cover Belper and Milford in particular but also extend further along the valley.

Outside of the speeches Adrian told us that he thinks, “Belper people will be blown away .”

One of these maps is due to become wallpaper in the new library.

The exhibition is in the entrance to the Gangway, the bridge walkway which used to link mills on each side of the road. Access is via Strutt’s North Mill Museum.

You can see the exhibition and explore the portal, at Strutts North Mill during normal opening hours of11am – 4pm, from Weds 30th Oct to Sun 3rd Nov this week, and the weekend of 9th/10th Nov, after which it will be moving to the Records Office in Matlock.  (It is no longer possible to see Seiko Kinoshita’s art installation Thread, due to damage caused by flooding in the basement of the North Mill.)

You can access the portal to see maps which have already been digitised on the county council website: www.derbyshire.gov.uk/heritagemaps

Here you can access the maps alphabetically, and lay multiple maps over one another to see how the area has changed.