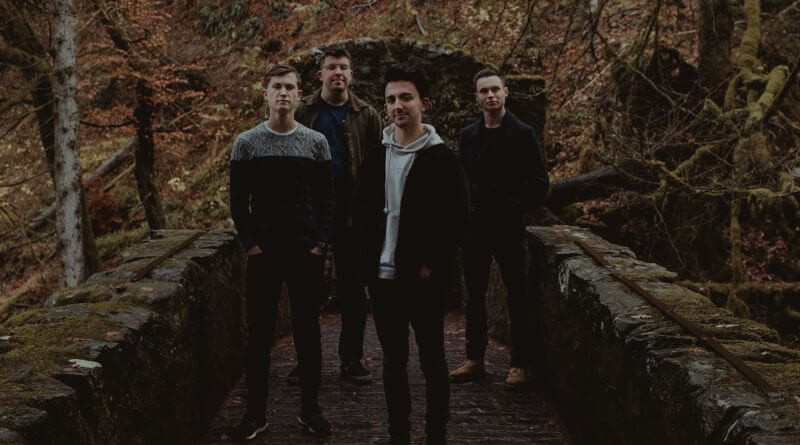 Gnoss are a dynamic four-piece of fiddle, flute, guitar and percussion, that tackle energetic tune sets and driving folk song with a ‘maturity of ability many of a greater age will envy’ (Living Tradition).

As current and former students at the Royal Conservatoire of Scotland, Graham Rorie (Fiddle & Mandolin), Aidan Moodie (Guitar & Vocals), Connor Sinclair (Flute, Whistles & Backing Vocals) and Craig Baxter (Bodhran & Stomp) have been tipped as ‘ones to watch’ by Songlines magazine for their lively, engaging and honest performances.

Forming as a duo in 2015, Gnoss (Graham and Aidan) picked up a prestigious Danny Kyle Award at Celtic Connections and reached the Semi-Finals of the BBC Radio 2 Young Folk Award (2016).

Since expanding to a 4-piece, Gnoss have continued to impress at performances and festivals across the UK earning them a nomination for ‘Up and Coming Artist of the Year’ at the Scots Trad Music Awards for 2017.

Now touring their new album ‘Drawn From Deep Water’, all eyes are firmly on this young quartet as they continue to stride forth from the pack.

Aidan Moodie belongs to a rich vein of Orcadian folk musicians that have made a name for themselves outside of the northern isles.

Since moving to Glasgow in 2015, Aidan has become one of traditional music’s more sought-after accompanists, touring alongside award-winning names such as Siobhan Miller, Claire Hastings and Iona Fyfe. He’s gigged all over Europe, performed to British Royalty, and – most recently- was one of the creative forces behind Orkney Folk Festivals ‘The Gathering: Generations’, performed to a sold out Celtic Connections 2019.

With a passion for lyricism and arrangement, Aidan is heavily involved in Gnoss’ creative side, with two of Drawn From Deep Water’s songs (Three Shores and Sea Widow) penned by him. He has a keen interest in poetry, taking the opportunity to shine a light on the words of fellow Orcadian George Mackay Brown throughout the album.

Aidan graduated from the Royal Conservatoire of Scotland’s ‘Bachelor of Traditional Music’ with first class honours.

Connor Sinclair is a talented multi-instrumentalist from Crieff, Perthshire.

Connor started learning the Highland Bagpipes from the age of 5, which led to an incredibly successful and varied piping career. An accomplished solo piper, Connor has won many prizes – including the Silver Medal at the Northern meeting in 2016 and 1st place in the A grade Marches at the Argyllshire Gathering. Connor has also won the World Pipe Band Championships twice as a member of the Grade 1 Field Marshall Montgomery Pipe Band, in both 2014 and 2016.

Connor attended the Edinburgh Music School at Broughton receiving tuition on bagpipes and piano. Connor Graduated with a degree in Scottish Traditional Music at the Royal Conservatoire of Scotland where he focused on bagpipes, whistle and flute, although he also enjoys playing the guitar and mandolin.

Connor’s musical influences are hugely varied and come from being immersed in Scottish music, culture, and history his whole life.

Craig is a drummer from Clackmannanshire near Stirling. He started out in the Pipe Band world, playing in the local Royal Burgh of Stirling Pipe Band, before going on to play with Fife Police Pipe Band, achieving regular prizes with the band around the Major Championships in Grade 1, as well as performing with the National Youth Pipe Band of Scotland, where he was Drum Sergeant from 2017-2019.

Craig has performed internationally in Germany, Switzerland, Italy, Ireland and America with the bands, and also placed 3rd in the Juvenile 5 Section of the World Solo Drumming Championships in 2017. He began playing bodhran when starting his Degree in Traditional Music at the Royal Conservatoire of Scotland in Glasgow, where he is now in his 3rd year, and now gigs and teaches regularly along with his studies. He also performs with the band TRIP, the Madeleine Stewart Trio and the Conival Ceilidh Band, as well as having performed with artists such as Finlay Macdonald, Brighde Chaimbeul, Iona Fyfe, Project Smok and many more around the traditional music scene in Glasgow and at festivals across the UK and beyond.

Orcadian fiddle and mandolin player Graham Rorie is an award-winning folk musician based in Glasgow. A graduate of the Traditional Music course at the Royal Conservatoire of Scotland, Graham has been making a name for himself as a performer, composer, session musician and producer.

While still in the early stages of his career Graham has gained a wealth of performance appearing at festivals including Glasgow’s Celtic Connections, Celtic Colours (Canada), Festival Interceltique de Lorient (France) and Celtica Valle D’Aosta (Italy). He has also toured Germany and Denmark with the Paul McKenna Band.

“Rorie, as well as catching the eye by playing fiddle right-handed and mandolin left-handed but upside down, writes tunes with an engaging twist and adds imaginative colour to arrangements that are smartly punctuated and crisply executed.” – Rob Adams, The Herald