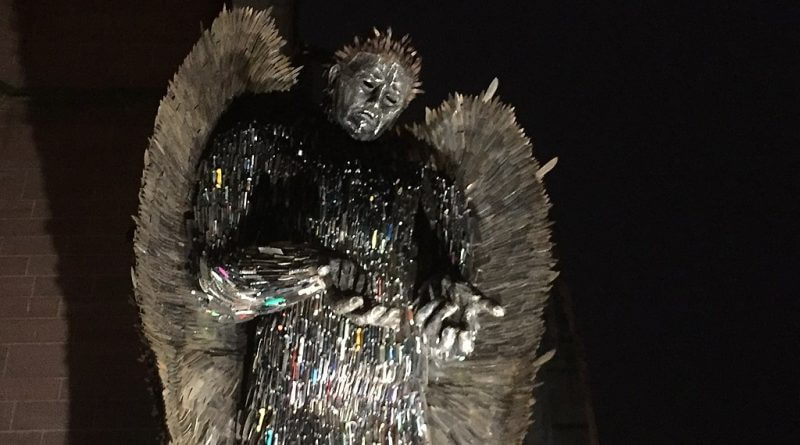 More than 90,000 people have visited the Knife Angel at Derby Cathedral this month and there is now only one week left to see it in Derby.

The National Monument Against Violence and Aggression, known as the Knife Angel, has been touring the country and has been in its current position in Irongate Derby for the month of October. The last day to visit, before it moves on to Chester, is a week today, Tuesday 29th October.

A large reason for the Angel’s visit is to raise awareness of knife crime, the impact on victims and to highlight the work that is being undertaken in Derbyshire to influence people not to carry knives.

Derbyshire police are holding one such event during next week’s half term when the area around the Knife Angel and down Irongate will be filled with different aspects of policing. They will also be joined by their partners from Derbyshire Fire and Rescue.

During the day there will be to chance to examine different strands of policing such as Armed Response, Police Dog Section, Rural Crime Unit, Drones Unit, Motorbike Safety, Cyber Crime and at 1pm there will be a demonstration of the use of tasers by experienced trainers.

The City Centre Safer Neighbourhood Team will be giving young (and not so young) people the opportunity to dress up as a police officer and sit in the prisoner cage of the police van.

Derbyshire Fire and Rescue Service will also be present with one of their fire tenders and crew with details of how to stay safe from fire.

This is one of the last opportunities to visit the Knife Angel during half term, bring the children down and learn about policing, the fire service and what they are doing to try to reduce knife crime.