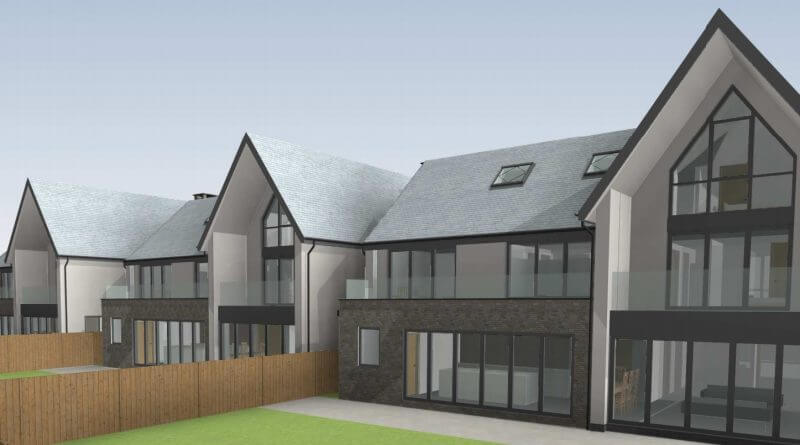 Plans for 15 modern homes in a Derbyshire town are set for approval.

Derbyshire County Council’s property firm, Derbyshire Developments, submitted the plans, which would see the houses built on the authority’s former depot off the A6/Derby Road in Duffield.

A large gatehouse on the site is to be retained, extended and converted into a five-bed home as part of the ultra-modern scheme.

A further 14 new-build houses have also been earmarked for the site.

Amber Valley Borough Council officers have recommended that the plans are approved*, at a meeting on Monday, October 14.

Eight of the new-build homes would have five-bedroom properties, while six would have four bedrooms each.

All of the homes would have balconies and would be two-storeys high at the front and two-and-a-half storeys at the back.

None of the houses would be affordable housing.

Councillor Dave Wells, who represents the ward and sits on the council’s planning committee, has objected to the plans.

He has called for starter homes and housing with “eco credentials”.

Two residents have objected. They also call for starter homes, along with affordable housing and fear that the scheme could be “harmful” to the Derwent Valley Mills World Heritage Site.

Meanwhile, one resident has written a letter supporting the plans saying it is a “worthy planning application on a brownfield site”.

It would also pay £26,637 to Duffield Parish Council for improvements to the Eyes Meadow playing fields.

The firm would pay £5,782 to the NHS for an expansion at Appletree Medical Practice in the town so that it can cater for an estimated 38 extra patients.

An NHS spokesperson said that the GP practice “does not have any spare capacity to manage increased patient demand” and that “population increases will exacerbate this situation”.

Borough council planners recommending approval wrote: “The proposals constitute a sustainable form of development.
“The scheme provides for net social, environmental and economic gains and represents a sustainable form of development, which has no technical issues associated with the development, and in consideration of the planning merits of the application, there are no adverse impacts which outweigh the benefits of the proposal.”

Four dilapidated semi-detached houses on the site, which have been vacant for several years, are already being demolished as part of the project.

The gatehouse extension would also include several balconies and a “glazed link” to connect the old building with the new.

Each home would have a double garage and space for two cars on their driveways.

*Officers are permanent staff, not elected councillors. Their recommendations are not always in line with public opinion. (Editor’s clarification)