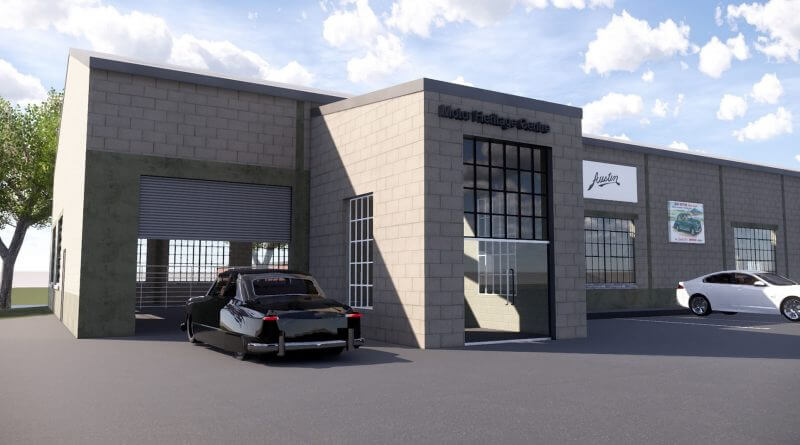 Plans for a vintage car museum in Ambergate have been given the green light – creating 30 jobs.

The proposals, filed by The Great British Car Journey Ltd, have been granted approval by Amber Valley Borough Council officers.

The scheme will see a large section of the former Richard Johnson & Nephew Wire Works, now the Derwent Works site, off the A6 in Ambergate, brought back into use.

The proposals for the site, which would be called the Ambergate Motor Heritage Centre, were filed in June and the museum hopes to open in April next year.

Part of the project would involve visitors being able to drive a selection of the museum’s exhibits along a defined mile-long route on the extensive site, around the buildings of an existing construction firm.

This would be called the Drive Dad’s Car experience.

More than 100 cars would be on display.

The theme of the attraction would be a specific part of motoring history – the mass production, in the UK, of vehicles aimed at providing affordable family transport.

Visitors will take a “ten-stage journey” through significant periods of British car history, from the 1920s to the modern day.

This exhibition will be called “The Great British Car Journey – when Britain ruled the road”.

The project would include building a deck and seating area overlooking the River Derwent.

A car park is already in place on the site, from its time as a factory, with 50 spaces. This would be improved and increased to 65 through the scheme.

The main access to the site off the A6 would also be upgraded.

The project would affect the two most northern buildings at Derwent Works.

It is intended to house the museum in the largest building, which covers 2,635 sqm.

This will also contain a cafe, gift shop, and a vehicle workshop to maintain and repair the exhibit vehicles.

The main building, built shortly after World War II, is said to be in a reasonable state with “minor structural and cosmetic repairs” required.

Roof lights will also be cleaned and replaced or repaired as necessary.

A smaller barn-type building, built pre-1940, was the former factory’s canteen and will be used to house the cars for the “driving experience”.

A derelict two-storey former workshop to the south of the main complex would be demolished due to its “poor condition” and because it contains asbestos.

A brochure for the museum reads:

The Great British Car Journey charts the history of the British car industry by focusing on the great car brands and the men behind them.
It gives a fascinating insight into the ever more perilous business of volume car making by placing British cars and their creators at the centre of the history of family transport.
In particular it focuses on the cars made in Britain since 1945 which like cookers, fridges and televisions became rapidly disposable, so that many have all but disappeared.
“So we welcome back the first car to hit one million sales in Britain: the much loved Morris Minor or ‘Moggie 1000’.
We marvel at the once ubiquitous Mini, over five million of which were made over a period of 41 years and we examine the once familiar products of American-owned Ford and Vauxhall, who both established massive production plants in the UK.
The Great British Car Journey looks at the successes and the failures which have played such a vital role in our social, economic and cultural history.
From the inspirational Austin 7, the first car affordable to the working family, to the eventual end of volume manufacturing by British-owned companies, the journey celebrates British innovation which is still evident at Jaguar Landrover, Lotus and McLaren, who remain market-leading car makers.
Above all though, the journey celebrates a lost era when inspirational and daring British entrepreneurs produced cars which briefly made them the uncrowned Kings of the Road.”
In support of the scheme, a report submitted with the applicant had read: “The proposed development will represent a significant investment in Ambergate which will generate wider benefits for the local economy.
It will provide significant new employment and will secure the viable future use of a building that is substantially under-utilised at present and which provides very little employment.
It will also contribute to the wider economy of the area, attracting new visitors who will then be likely to go on and visit other attractions and businesses in the district and beyond, helping to underpin the important tourism industry in this part of the East Midlands.
We anticipate that the application scheme as a whole will provide a very significant boost to the local economy of Ambergate and the surrounding area.

In 2001, the Litchfield Group bought the complex and used the intended car museum buildings for storage of door and window products.

However, the buildings have fallen into a state of disrepair.

At its peak, the wire works had employed 500 people and famously produced the telegraph cables laid underneath the English Channel during World War II.