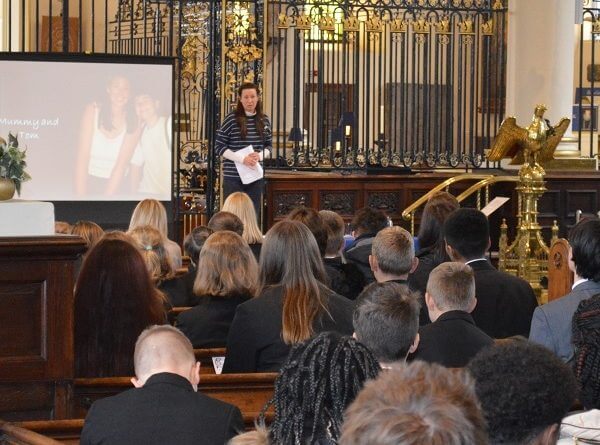 More than 300 young people from schools in Derby gathered in Derby Cathedral on Monday 7th October to speak about the dangers of carrying a bladed weapon.

The event was planned as part of the visit to the cathedral by the National Monument against Violence and Aggression, known as the ‘Knife Angel’.

The forum was arranged by officers from Derbyshire police in partnership with Derby City Council and included hard-hitting inputs from those who have been directly affected by knife crime.

The cathedral fell silent when Belper’s Rachel Webb spoke (pictured). Rachel’s son Tom, was 22-year’s old when he was stabbed and killed in St Peter’s Street, Derby by a 16-year-old boy in January 2016.

Rachel talked about Tom’s life, how he was killed and the effect his murder has had on her. She pleaded with those listening to think about the ones that they love and the implications of carrying a knife would have on them.

Rachel Morris, CEO of Derby Cathedral and Chair of the Knife Angel Steering Group, said: “We always felt that a vital part of the Knife Angel’s visit was to stimulate conversation about the futility of knife crime and so it has been a privilege to host this event, the 300 young people have heard some powerful messages.”

The Knife Angel is on-display outside Derby Cathedral, Irongate, Derby until Wednesday, 30 October, with the best time to visit being between 10am and 8pm when volunteer marshalls are in-place to help explain the message the angel carries.