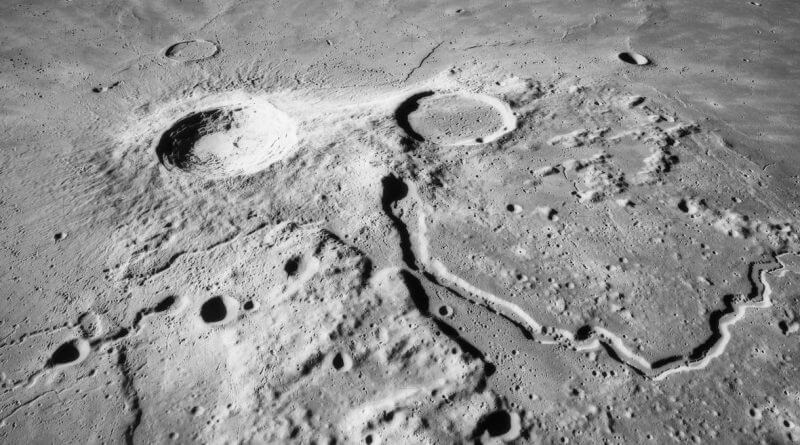 In the Night Sky Over Belper: The Orionids and Taurids meteor showers. Observe the full Moon on the 13th to view the bright lunar crater, Aristarchus. Jupiter and Saturn shine low in the southwest.

The Moon is full on the 13th of October. It is close to the red star Aldebaran (the eye of Taurus) on the 17th.

Aristarchus is relatively easy to spot with binoculars. Look for it on the 13th of October, when the Moon is full.

When you look at Aristarchus you are seeing an impact crater 25 miles across and 2.5 miles deep. See the image above for a closer view, taken by the Apollo 15 command module when in lunar orbit (courtesy of NASA images).

The Orionids Meteor shower has a broad peak. It is worth trying to spot these fast and bright meteors between the 20th of October and the 27th, when maximum hourly rates are expected to be around 20 meteors per hour. Look upwards towards the east (try to see as much of the sky as possible) from 10pm onwards.

The Taurids Meteor shower starts from the 19th of October and peaks in November. At its peak the Taurids only produce 5 meteors per hour. However, the best are are slow moving and bright – and can be quite impressive; if you can spot one. Look from around midnight, towards the east.

(Be aware that maximum predicted rates for meteor showers always assume a 360 degree view of the sky and perfect viewing conditions – in reality you will see far fewer meteors than the predicted rate, and much patience will be needed).

Jupiter can be seen in the southwest as darkness falls. It is even lower in the sky than Saturn. Binoculars will show the larger Galilean moons – a telescope will reveal all 4 Galilean moons and Jupiter’s cloud bands.

Jupiter appears to be adjacent to a crescent Moon on the 31st of October.

Saturn is still visible for a couple of hours after sunset. It appears low in the sky in the southwest. As there are no bright stars in its region of the sky it can be spotted quite easily, however you will need a low horizon to see it clearly. A telescope will show Saturn’s rings.

Look for the space station on Monday the 7th of October (7.34pm). Sightings of CYGNUS, the automated cargo spacecraft that supplies ISS, may be spotted on Monday 7th of October (6.55pm and 8.31pm) and Tuesday 8th of October (7.58pm). Check the Spot the Station website for further details and for sightings after this date. You can also sign up to the NASA Space Station Alerts service which gives advance notifications of sightings.