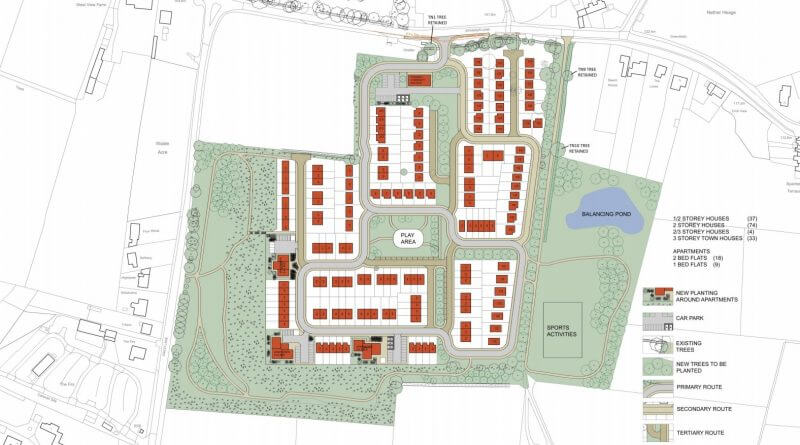 Amber Valley Borough Council has refused plans for 175 homes near Belper months after they were initially approved.

Garner Holdings had submitted plans for the Firs Works site, in Spanker Lane, in Nether Heage.

The site is currently an industrial estate.

Amber Valley Borough Council (under Conservative leadership) approved the plans in March, despite a raft of fears over road safety and the potential impact additional traffic could have on the village.

Then chairman of the planning board, Conservative Councillor Norman Bull had used his casting vote to approve the plans after a deadlock.

In June, the new Labour administration chose to claw back a number of planning applications for review.

This included the Firs Works site, which had not been formally signed-off due to discussions over Section 106 funding. This is money the developer would pay for local infrastructure to mitigate the impact of the new housing on existing services. The level of funding required from developers was raised by the incoming council.*

On Monday, September 9, councillors chose to reverse the previous decision and reject the application, against the recommendation of non-party local government officers.*

The application would include 27 flats and 148 houses – around 50 of which would be affordable housing.

There was more debate on whether the site was brownfield or in the protected green belt.

Planning officer Rae Gee confirmed that part of the site was in the green belt  but that this area was proposed to be used for the development’s recreation area, which was “acceptable” to the authority.

Resident John Childs said: “After the last meeting, I was so angry I didn’t want anything to do with Amber Valley Borough Council apart from putting out my bins.
“This application is flawed, the environs will quite simply not take the traffic of this development.
“There are a number of errors including one that says children can walk to school in Chesterfield. A simple cut and paste error.
“They say children can walk safely to Ambergate, which is not possible with no footway.
“We came to the previous public meeting and we were neglected and utterly ignored.
“The crossroads near this site is extremely dangerous. It is a blind summit, this is absolutely ludicrous.”
Fellow objecting resident, Rita Childs, said: “We are deeply worried about road safety. Despite the blind summit, vehicles often do not slow down and we encounter serious risks whenever we walk this route.
“The impact on highways from this development will be significant.
“I remind you of your responsibility to keep roads safe for residents, especially vulnerable ones.”

Johnathan Jenkin, the agent for the applicant, said: “This is a priority site for housing, it is a brownfield site.
“There would be 52 affordable houses and new public open space as part of this development.
“There is £898,718 for school places at Swanwick Hall School, there is £485,629 for more places at Heage Primary School.
“There would be substantial benefits for local people.
“The existing use of the site is for industrial and commercial operations and there is traffic associated with those businesses such as heavy vehicles. While there would be more cars instead as part of this development, the level of traffic would be the same overall.”

Cllr Ron Ashton was vice-chairman of the planning committee when the application was previously approved.
He said: “This is a brownfield site that Labour stressed it wanted to build on.
“There is already traffic from this site due to the businesses there, I don’t think having houses there will make any difference.”

Cllr Fay Atkinson said: “This is not a brownfield site, there is green belt land which is being encroached on.”

Cllr Brian Lyttle said: “I think we are damned if we do and damned if we don’t with this one.
“I agree we do want to build on these sorts of sites but this is too many houses at once.”

Cllr John Walker said: “This will see more children have their safety put at risk.”
During the Second World War, there was a prisoner of war camp on the site, known as Camp No. 58.

Amber Valley Borough Council has more than a 5 year supply of potential building sites allocated for development outside of this site. This proposal was previously flagged as including Green Belt, and reported on by Nailed.*