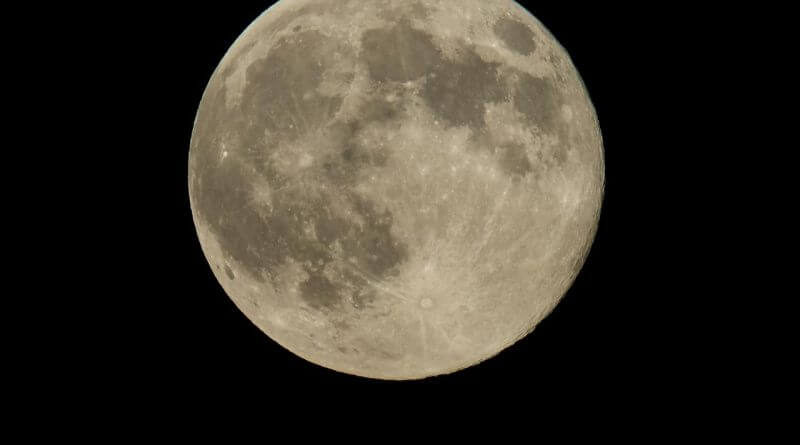 In the Night Sky Over Belper: A Harvest Moon on the 14th. View the Lunar crater, Tycho. Jupiter and Saturn shine low in the south. Listen to the sounds of space.

The Moon will be full on September 14th. This is the Harvest Moon, which is the full Moon closest to the Autumn Equinox:

“It is remarkable that the Moon, during the week in which she is full in harvest, rises sooner after sun-setting than she does in any other full-moon week in the year. By doing so, she affords an immediate supply of light after sun-set, which is very beneficial to the husbandman, for reaping and gathering in the fruits of the earth”. (Falconer’s New Universal Dictionary of the Marine (1815) as quoted in Nocturne, A Journey in Search of Moonlight – James Attlee).

Also check out the 23rd / 24th of September (around midnight) when the Moon will appear to be almost directly below Castor and Pollux  (the two brightest stars in the constellation of Gemini) forming a vertical line with these stars.

The 14th of September is a good time to identify the large lunar crater, Tycho. Using binoculars, locate Tycho towards the bottom of the Moon.

At the full Moon, Tycho’s rays will be apparent, spreading outwards from the crater. The rays are the result of debris thrown out by the impact when the crater was formed 108 million years ago.

Jupiter is very bright, shining low down in the south. Start looking for it when it gets dark, from 9.00pm onwards. A telescope will show its bands and the four Galilean moons (Io, Ganymede, Europa and Callisto).

Saturn also shines low down in the south, at a slightly higher elevation than Jupiter, and is visible from 9.00pm. A telescope will show Saturn’s rings -one of the more impressive sights in the night sky. Saturn is visually adjacent to the Moon on the 8th and 9th of September.

The Sounds of Space.

Space is the Place (no relation) is a website created by the sound project Cities and Memories.

The site celebrates the 50th anniversary of the Moon landings with a unique archive of sounds spanning the history of space travel.

The site consists of original NASA sound sources remixed by sound artists around the world, asked to imagine: “What does space sound like?”

Access the soundtracks here: Cities and Memories: Space is the Place.

All sightings between the 7th of September and the 14th will take place in the early morning hours – between 2.59am and 6.05am. Check the Spot the Station website for details and for sightings after this date. You can also sign up to the NASA Space Station Alerts service which gives advance notifications of sightings.

The society will be holding an “Introduction to Astronomy” talk on Friday the 20th of September. The theme will meteorites. DDAS member, Anthony Southwell, will also show a selection of meteorites.

On the 4th of October there will be a talk about the “Water Plumes of Saturn’s Moon, Enceladus” by Dr Chris Arridge of the University of Lancaster.

If you would like more details please email DDAS Secretary Brian Dodson:  secretary@derbyastronomy.org.

The website of the society can be seen here: Derby and District Astronomical Society.

Meetings of the society take place at The Friend’s Meeting House, St Helen’s Street, Derby and generally start at 7.30pm.