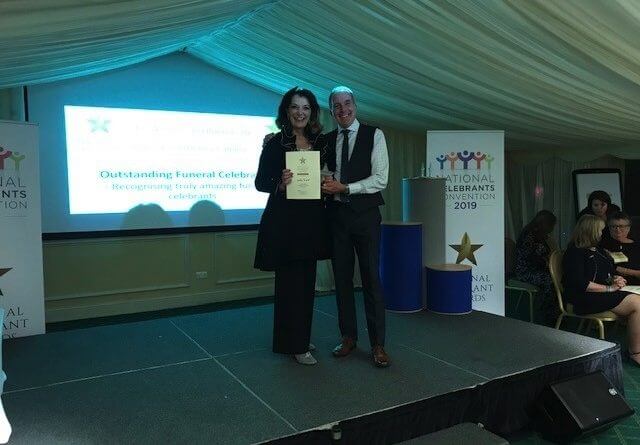 Nether Heage based Sally Ward has won the top honour of Funeral Celebrant of the Year at a ceremony in Northampton.  The awards are organised by Civil Ceremonies Ltd, the leading provider of training to the celebrant industry.

Sally’s award was given for “outstanding funeral celebrancy practice.”

Judges selected her from many hundreds of nominees to take this prestigious award. On stage, in front of a large
audience, the host gave details of some of the comments she had received in her many nominations.

“We will cherish Sally’s words for ever – she captured the sense of my grandmother’s life perfectly. She spoke with compassion and honesty.”  “She is the best – an absolute legend.”

She received nominations from families and funeral professionals alike and what is felt came through strongly was how heartfelt they were, and that they recognised Sally’s professionalism.  Nominations expressed gratitude for her services.

She started her work as a Celebrant in 2009 and the first service she carried out was for her father. She had described this as her own “lightbulb moment”, leading her towards her new career.

In accepting the award, Sally wanted to thank everyone who nominated her but especially, she wished to thank the thousands of families who have trusted her to tell their family story and who have worked alongside her.