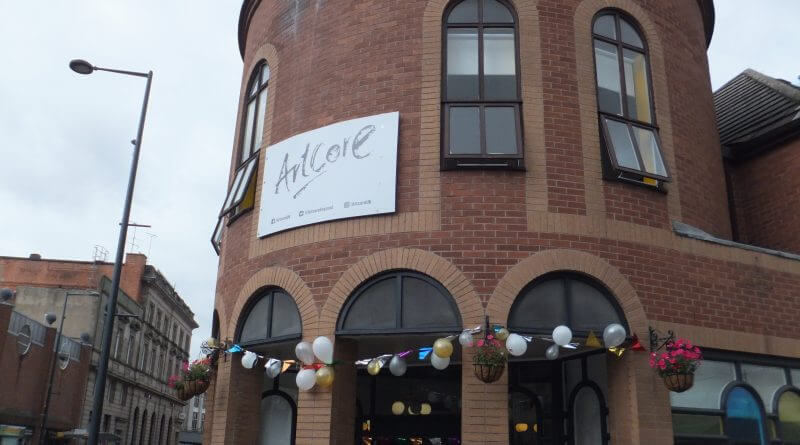 The 15th August 2019 saw the opening of a brand new, contemporary art space belonging to visual arts charity Artcore. They got the keys to their new building back in May and have worked tirelessly ever since to convert the former Laura Ashley retail space ready for their August Launch.

Their journey began in India in 1995 by artistic director Zahir Shaikh and executive director Ruchita Shaikh before moving to London and then to Derby ten years ago. Artcore work with professional local artists and provide a large variety of projects, outreach programmes and workshops for adults, children and schools.

Artcore have converted the former retail space into a shop displaying local artists work, a café and a craft space downstairs whilst also creating a performance and exhibition space upstairs.


Sarah Perkins, one of the artists, commented, “I used to be police woman for twenty one years, I took medical retirement, it was a hard decision because I was ending a career I had known for twenty one years. Then I sat still for a while and reassessed my life and where I wanted to go and that is when I picked up my paint brush and thought I’d give it a go and here I am. I have produced all of this since last September!”

The opening of this building also marks Artcore’s ten year anniversary in Derby and they have gained many loyal followers over the years. Professor Huw Davies, the Major of Derby and the Police Crime Commissioner Hardyal Dhindsa all gave speeches praising Artcore on their wonderful work and what they have done for the communities of Derby.

Hardyal Dhindsa said, “As Police and Crime Commissioner for Derbyshire, I have also been interested in how they engaged communities and that art can help divert away from crime.”

Executive director Ruchita Shaikh also shared a few words about Artcore, “Our tagline does say together we stand. With you all being here, it has proved to me that that we can stand stronger, we can walk a lot further and it is the beginning of a journey for more years to come.”

Artcore is always welcoming of artists both established and emerging.  They have included artists from Belper and Holbrook in their line up.  They are also always on the look out for volunteers to help with all aspects of their work from administrative duties to assisting the artists with their workshops. You find out about current opportunities to be involved HERE.

One thought on “Together We Stand at Artcore’s New Building”