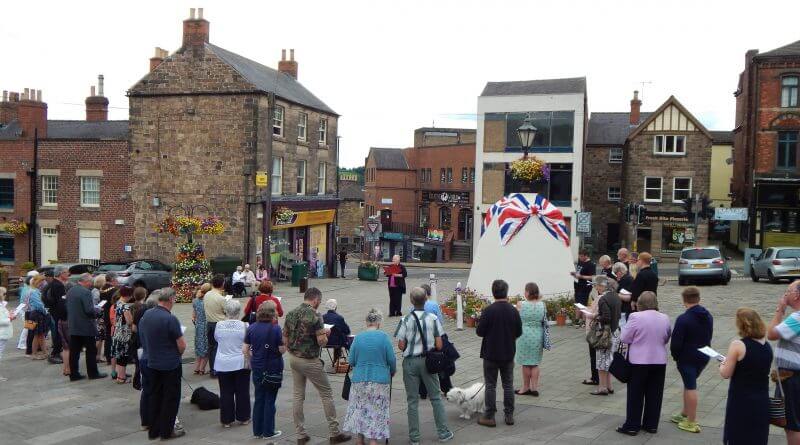 100 years ago, on 19th July 1919, Belper celebrated the end of “The Great War” (WW1) with a service in the Market Place, and later a procession and Peace Cenotaph/Memorial.  100 years later, on 21st July 2019, parts of these celebrations of peace were replicated by the Belper in Wartime group.

The Peace Celebrations marked the end of 4 years and 3 months of war. It would be nice if we could say that we were celebrating 100 years of peace, but sadly that peace only lasted 71 days, and by the time of the peace celebration in late July, the Irish War of Independence had been declared against Britain (21st January 1919) and the Third Anglo-Afghan War followed 105 days after that (6th May 1919).

The ornamental water fountain in the Market Place was covered with the temporary white Peace Cenotaph (memorial for those buried elsewhere), just as it was in 1919.  In 1919, the peace memorial was decorated by locals bringing flowers from their own gardens, due to a railway strike.  In 2019, locals brought flowers to the Gardening Club, who filled the jars around the memorial to reproduce the original personal decoration.

There was a procession in the original celebrations, which was abandoned for the 2019 celebrations.

There was a small gathering of the public to mark the occasion.  The Mayor, Simon Mallett, and Deputy Mayor, Mary Dwyer, were both present.

There was a service in the Market Place around the Peace Memorial led by Sue MacFarlane, a lay leader and celebrant of Belper Unitarian Chapel.

“We’ve gathered here, almost one hundred years to the day from the first Belper Peace Celebration, when there was a service in this very place as part of the day’s activities. On the 19th of July 1919, the people of Belper gathered to celebrate peace after The Great War. Given the number of lives that were lost in the war, some felt that celebrations were not appropriate. However, once everyone who had been away at the war was back, Belper felt ready to celebrate the peace.

“At the start of their celebration, there was a simultaneous discharge of five guns. It seems strange that, after so much fighting and gunfire, this was chosen as the way to open their celebrations. Today, we will mark this part of their original celebration by lighting 5 candles. Throughout history, we have lit candles signify special or sacred times. They are a sign that we are turning away from the busyness of life as usual, and setting time aside for a special purpose. That purpose today is to think about the peace celebrations that happened 100 years ago.

“The candles this afternoon will be lit by five members of the Belper in Wartime group, representing those who have worked hard in the past five years to ensure we properly commemorated those from Belper who died, and those who lived through, the Great War of 1914-1918.” 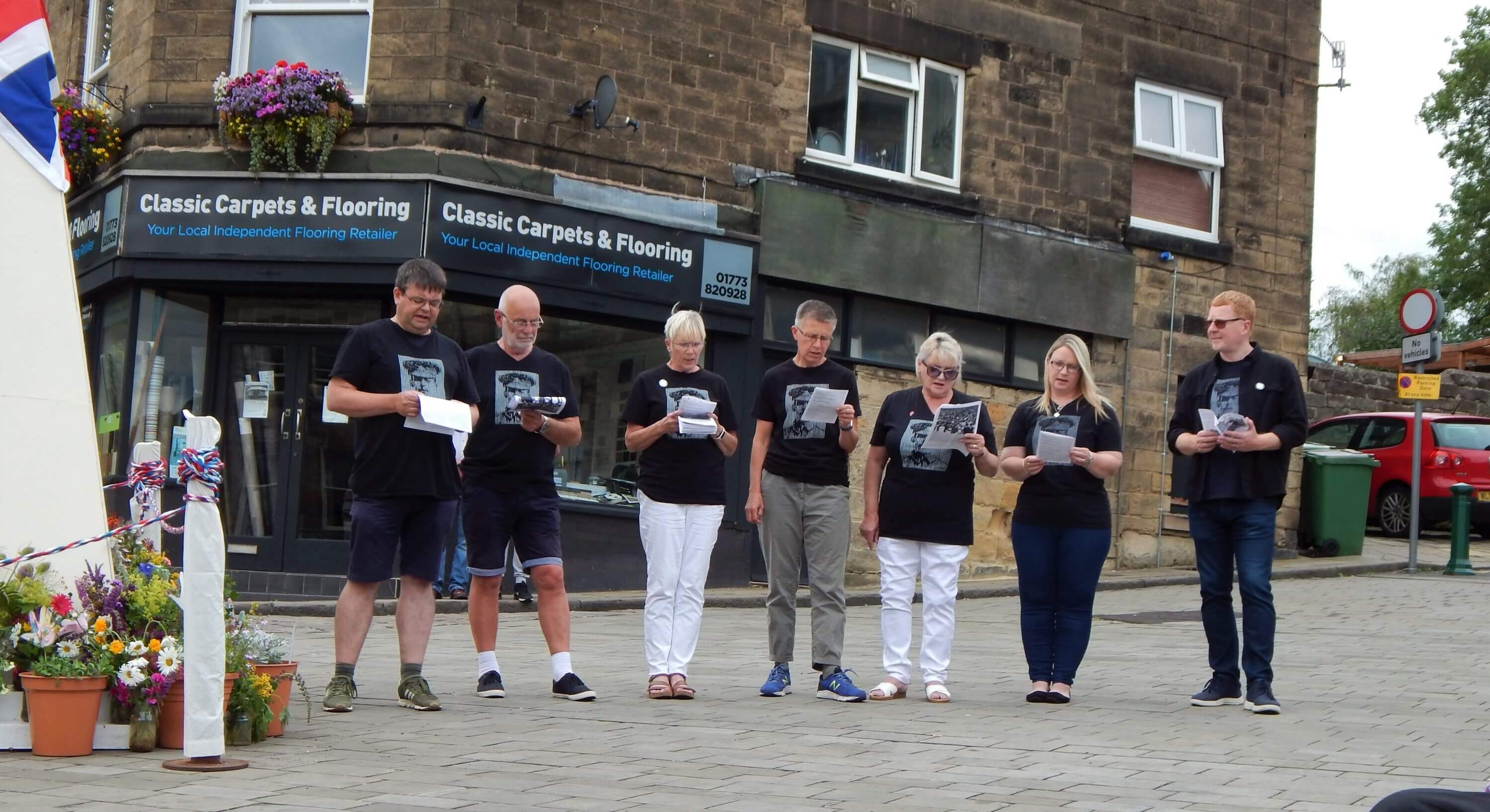 The candles were then lit by Belper in Wartime members (all dressed in black Sacrifice t-shirts), placed in jam jars, and one by one, placed to the side of the memorial facing the public.  The candles were placed by Andy Mayers ( the artist who created Sacrifice), Kath Woodward, Lynne Beardmore, Paula Duddles, and Olwen Boe.

Sue continued,
“On the day of the first Peace Celebrations, hymns were sung here in the Market Place, in the Memorial Gardens, and in Milford. We don’t have a record of any particular hymns sang that day, but we do know that this hymn, that we will all sing together, was sung in this very place at the first service to mark the temporary cenotaph that was erected right here. Let’s sing it together…”

Richard Pinkett, local war historian, and member of Belper in Wartime, spoke next,

On 19 July 1919, a salvo of five guns began the day of Peace Celebrations at 8am.
At 11am an open-air service was held in the Market Place, followed by a dinner at noon for about 450 of the town’s over-60s in the Public Hall and the River Gardens.
At 2.30pm the town’s children were invited into the Parks for some patriotic songs and hymns, accompanied by the Belper Prize Band on its first appearance since the war, and to hear some speeches. Afterwards, the children processed off to their Sunday Schoolrooms for a celebratory tea.
Later, an evening dinner took place for 1,500 of the returned servicemen, in the River Gardens pavilion. Colonel Maurice Hunter of Chesterfield Road presented 800 packets of cigarettes to the men as part of the evening. Many fireworks were let off across the town as darkness fell, and festivities continued until around midnight.

On Friday 26 September 1919 a temporary cenotaph was erected in the Market Place, and a guard formally mounted at 1pm the following day. The memorial was draped in the Union Jack, surmounted by laurel leaves.
The guard consisted of four men, one at each corner, replaced hourly. Many wreaths and flowers were laid at the memorial – because of a railway strike, there was a shortage of fine flowers in the town, so many brought garden flowers to lay around the cenotaph.
The following day there was a public procession, along Church Lane, Green Lane, Long Row, Bridge Street and King Street, then past the memorial followed by a service in the Coppice. Belper Brass Band attended and led the procession. The Belper News claimed it was ‘the biggest crowd on record’ (about 6,000) in the Coppice for the service.
About 500 ex-servicemen attended. The Reverend Cooper gave a short address and hymns were sung.

Sue then called for a two minute silence,
“Let us spend some time in prayer, meditation, reflection, knowing that whatever we individually call this time, we are joining together in silent fellowship and remembrance of the people of Belper who died in The Great War. Let us spend two minutes in contemplation of how it must have felt to be celebrating the peace of so many years of war.”

This was followed by a reciting of the International Prayer of Peace:

The service was concluded with a hymn called This Is My Song (referred to as Song of Peace in the service) written by Lloyd Stone in 1913, to the tune of Finlandia by Sibelius, and a blessing:

Following the service people were invited in to No. 28 for trench cake, alternate cakes and tea, and to see a small exhibition of photographs of Belper’s Peace Celebrations in 1919.  The cafe was busy.  The Rough Truffles and Belper Community Choir turned up after a team-up performance at St. Peter’s Church, to Flash Choir the exhibition.

2 thoughts on “100th Anniversary of the Peace Celebration After WW1”