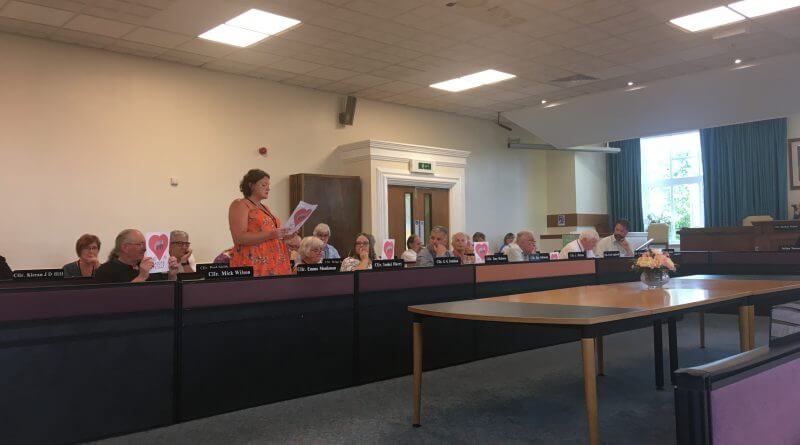 A raucous Amber Valley council meeting has seen the authority declare a climate emergency, make the borough a “frack-free zone” and ban badger culling on its land.

On Wednesday 24th July 2019, members of the authority met for the last full council meeting of the season.
In what was a toasty summer’s night, the debate often became heated.

Councillors from the main two political parties, the Labour administration and the Conservatives, frequently exchanged jibes.

While councillors from all political parties backed a call to declare a climate emergency, Conservative group leader, Cllr Kevin Buttery, questioned why it had taken 12 weeks since the election to make such a move.

Leader of the authority since May, Labour’s Cllr Chris Emmas-Williams, said that the council had been busy spending money on the priorities voted for by members of the public.

He also rebutted that the Conservatives had not brought forward such a motion during their four years in office.

Cllr Paul Smith (Labour) said that it is hypocritical for several Conservative borough councillors who are also county councillors to vote in favour of declaring a climate emergency, when they had voted down a move to do the same at the county authority.

He said that at a county level, Labour had plans to attach solar panels to all of the authority’s buildings and claims these were shelved when the Conservatives came into power in 2017.

Cllr Buttery, who is also a county councillor, said that the Labour administration could have made such a move, and more, to combat climate change, during its previous 28-year stint in charge of the county council.

During the meeting, the Labour administration often clashed with the Conservatives over the lack of answers to questions and the time given to Tory members to speak.

At one stage, Cllr Buttery quipped: “So much for openness and transparency.”

Cllr Smith responded: “I am not going to take lessons on democracy from you.”

Cllr Buttery and Cllr Trevor Ainsworth (Conservative) both backed the call for a climate change emergency to be declared in the borough, but not the county.

They said, however, that if the issue was to be taken seriously, it needed serious financial investment, which has not been detailed.

Cllr Dave Wells, the council’s only member of a third political party, the Green Party, said that the authority could not continue with “business as usual” while declaring a climate emergency.

He said: “This is an emergency, doing nothing is not an option.”

Cllr Wells called for the council’s cabinet to bring a report back on work that has been carried out to combat the climate emergency every six months.

Cllr Buttery said that the delay of an initial six months before any information on how to combat the emergency is provided is “kicking the can down the road”.

The council formally agreed an aim to make the authority carbon neutral by 2030 and to call on government to provide “powers and resources” to make this possible.

The council agreed that it “does not welcome fracking”.

Fracking is the process in which gallons of water are used to drill at high pressure into small cracks miles underground to collect natural gases.

The council also “noted” “the well-documented risk of groundwater contamination as a result of fracking, which would exacerbate the pressure on water supplies and put residents at risk”.

It agreed to send the agreed motion to central government and call on it to reverse all licenses for exploratory drilling for shale gas in Amber Valley.

Cllr Emma Monkman, called for the authority to ban the culling of badgers on Amber Valley Borough Council land, and implored town and parish councils to do the same.

Several councillors held up pieces of paper showing badger on a red love-heart, surrounded by the words “No AV (Amber Valley) Badger Cull”.

Photo: Cllr Emma Monkman speaking at a meeting of the full council and calling for a ban on badger culling on Amber Valley Borough Council land. by Eddie Bisknell