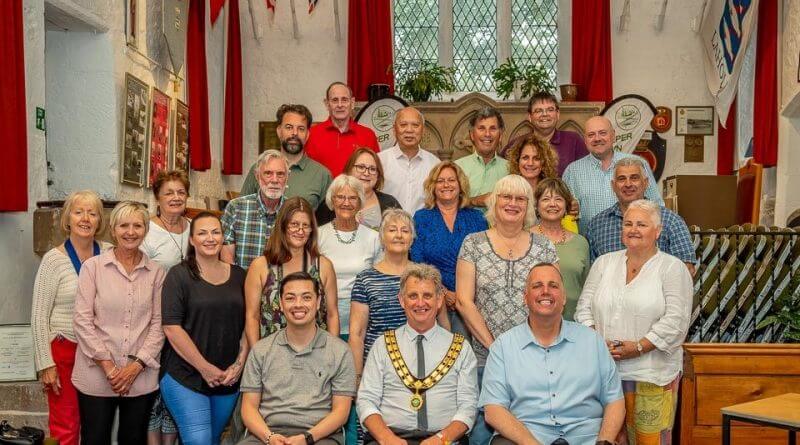 On Tuesday 9th July representatives started to arrive from Pawtucket, Rhode Island, to celebrate the 25th anniversary of Belper and Pawtucket being twin towns.  Although our history together sees its 230th anniversary this year, because Belper’s Samuel Slater emigrated to Pawtucket with the plans for our mills, and started the Industrial Revolution in America, in 1789.

Our long history, which can be traced as the origin of modern industrial production, is now tied up in a 25 year friendship, with strong focus on our shared and individual heritage, which is sadly partly decaying in both locations.  Pawtucket is about 3 times the size of Belper, with a 75,000 strong population, to our 23,000.  Belper’s size has been controlled by heritage measures, including the UNESCO World Heritage Site Buffer Zone, which requires that all views of our heritage remain unchanged.

On Tuesday, Natalie, Christian, Donna and Michael arrived at 7.35am in Manchester and travelled down to Belper from there.  Natalie was part of the original twinning of the two towns in 1994, and is one of the heads of Blackstone Valley Tourism Council. Christian is a film-maker working on a documentary called Slatersville, about the town and mills which Samuel Slater built, and about the Belper origins of both Slater and his creations.  Donna is the Blackstone in Bloom co-ordinator, a contest exported from Belper to the Blackstone Valley after viewing our Belper in Bloom displays in previous years.  Michael is a preservation enthusiast, looking at what we are doing with our heritage.

On Wednesday, Bob, Debbie, James and Adrienne arrived in Belper. Bob is also one of the original party, when our towns were twinned, and another head of Blackstone Valley Tourism Council.  Wednesday was the last day of preparation for the well dressings before they were erected in the Memorial Gardens on Thursday and Bob and his wife Debbie hoped to see the last of the petalling of the well dressings in the East Mill on Wednesday evening.

During the day, Christian did some filming for his documentary, Slatersville, in the North Mill, before they all went down to see the final petaling of the well dressings.  Unfortunately the petaling had been completed unexpectedly early and both Nailed and the Pawtucket visitors missed the completion of them, but the visitors were “delighted” to see that our twinning was the focus of many, including both Pawtucket itself, and Mr. Potato Head, the amusing gift Pawtucket gave to Belper, to which Belper’s reaction at the time was rude.  Pawtucket is the birth place of Mr. Potato Head, a popular figure with children, who Nailed has tried to change the image of, chronicling his fancy dress appearances at many local events.

Some of our guests went on a hard hat tour of the Museum of Making at Derby Silk Mill, another part of our World Heritage site, with Belper Mayor Simon Mallett.  The purpose was to see how the museum development is progressing since their last visits.  Their guide was Hannah Fox, who manages the Silk Mill project (blue hat). 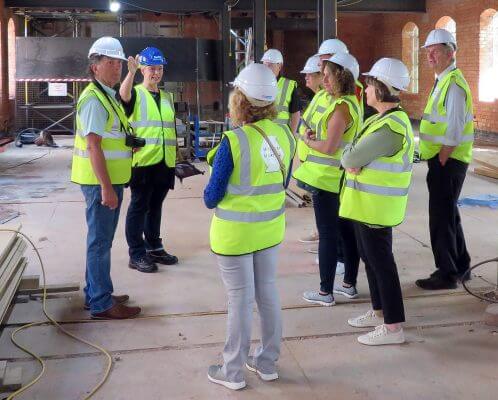 They also visited the Market Place to learn about how Belper is commemorating the centenary of the Peace Celebrations.

And they had a look at the floral displays in Belper, ahead of the Belper in Bloom judging.

There was then a meeting with Love Belper and Belper Town Councillors, where the Pawtucket visitors got to meet representatives of Belper’s independent businesses and see Love Belper’s tourism advert.

Later they toured the Mills in Belper, seeing rarely seen parts of the heritage like the 1795 Gangway.

On Friday, they met the Belper in Bloom judges. 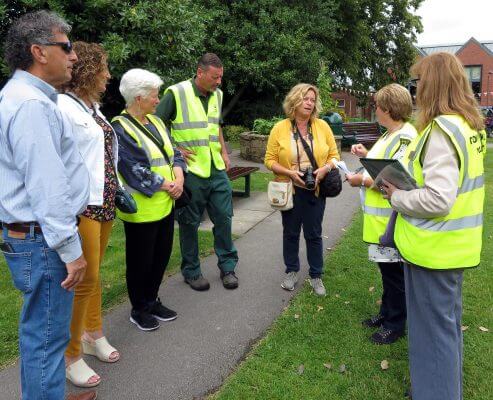 Visited White Peak Distillery in Ambergate, where they got to see both a repurposed heritage building, and a sustainable heritage industry which is relatively new to the area. 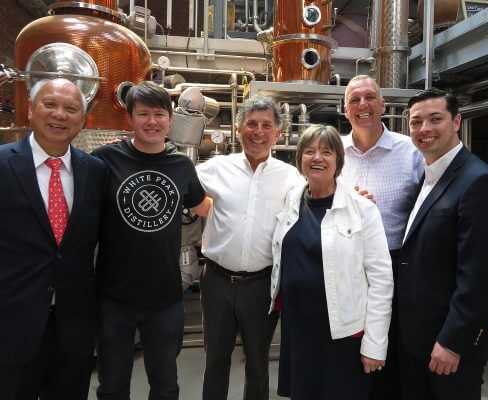 Come back tomorrow for more adventures, including the renewal of the twinning compact, and a special plaque unveiling.