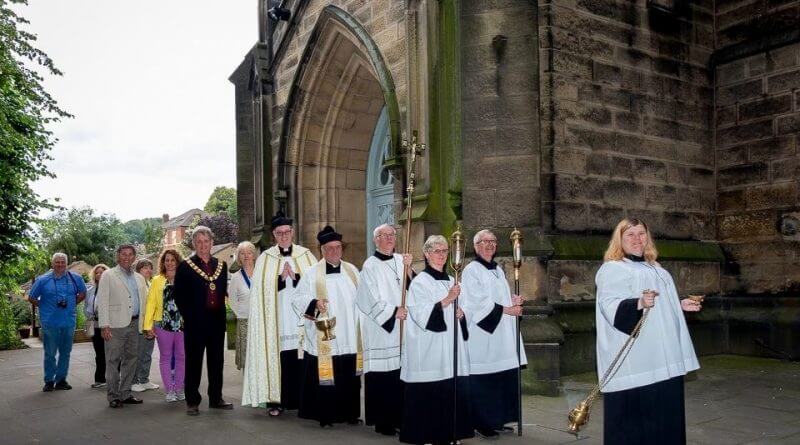 On Sunday July 14 the annual Well Dressing ceremony in Belper moved to the Memorial Gardens.

The procession from St Peter’s Church to the Memorial Gardens, which featured USA delegates from Belper’s twin town Pawtucket, ended with the well blessing ceremony. Derwent Brass Concert, in front of a large crowd, then played Jerusalem.

In a break from tradition, the Well Dressings were moved from the River Gardens to the Memorial Gardens in the centre of town.

Sue Smith, Chair of Belper Gardening Group, who co-ordinated the well dressings this year, commended the hard work that all the organisations had put into their designs.

“This year the Well Dressings couldn’t be in the River Gardens because of the building of the Tea Rooms. The impression I get it is that a lot more people have come around to see them, and a lot of people are pleased that they are here. They are much more central.”

Each Well Dressing usually takes a week to make, with the different organisations often spending over 9 hours per days on their designs. Clay is settled in the frame before hard materials are added and then finally the petals are placed right before the Well Dressings are shown to the public.

This year’s theme was a choice between the ‘twinning’ of Belper with Pawtucket or the RHS Chatsworth theme ‘Senses’.

Cllr Simon Mallet, Mayor of Belper, said: “The Well Dressings are excellent. A lot of people have referred to the twinning anniversary with Pawtucket and the USA and it is nice to see it recognised by those involved.

“The Well Dressing is about a recognition and thanks for water. We are very fortunate in Belper, Derbyshire and Britain to have an abundance of water, but for me the issue is about some of those countries and communities of the world who live in difficult circumstances because of the lack of water.

Belper, as a small part of that world, needs to be taking that into account. Hence our commitment to a climate emergency and environmental changes which will hopefully improve the lives of other people around the world.”

Over the past week a delegation from the USA’s Blackstone Valley and Belper’s twin town Pawtucket have been hosted by the town to celebrate the 25th anniversary of the twinning. The group had visited Derby’s redeveloped Silk Mill, attended the Belper In Bloom judging and also had an evening of entertainment at St Peter’s Church. Central to the visit was the Mayor of Pawtucket and the Mayor of Central Falls signing the compact between Blackstone Valley and Amber Valley and re-signing the compact between Pawtucket and Belper.

Adrian Farmer, Derwent Valley Mills World Heritage Site Heritage Coordinator, spoke about the visiting delegation from the USA, discussing the increased potential for tourism, as well as the cultural and economic opportunities which had arisen from the visit.

He said: “They’ve been really pleased with what they have seen. It’s been a bit of a rollercoaster for them, but they have lots of ideas that they want to take back. Hopefully there will be lots of new connections made so that we can move on with the Twinning and make the most of it.”