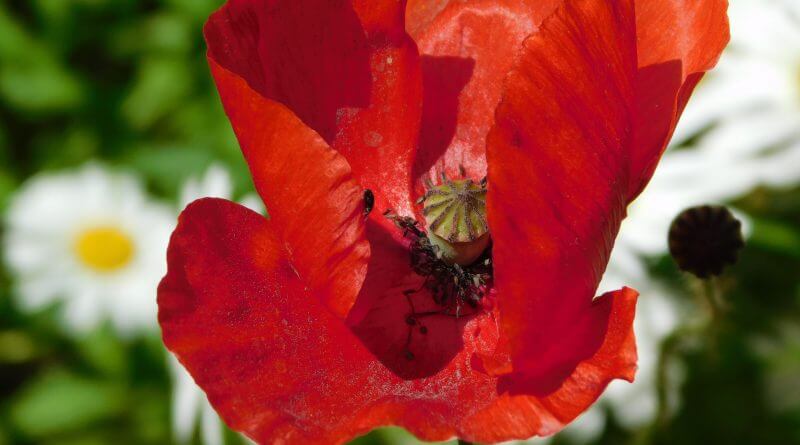 We couldn’t get to all of the gardens on the Open Gardens trail this year, because we could only cover one day, due to the unveiling of Sacrifice on the second day.  But what we did see gave us a beautiful peak into usually private parts of Belper, and a new eye with which to see some public spaces.

Here we share some of the magical gardens we got to explore on the hottest day of the year so far, with temperatures peaking at 32 degrees.  There were 20 gardens either public or open for two days, including parts of Belper as far apart as Sandbed Lane and Mount Pleasant Drive.

Beaurepaire Garden (named after the myth of how Belper came by its name) is a public garden managed by a number of individual gardeners who sought to renovate the space.  Some of the gardeners are dedicated to the cause, and some have let areas become neglected.  This creates a magical space which feels like wandering into a lost garden.  The track for the model train lies unused, with branches on the line and boards to allow people to cross it without damaging them.  The water is covered in oxygen producing algae, and random statuary gives the impression of a derelict Victorian play garden.  The clock tower dominates, close to where Belper lost a clock tower, when some of the mills were demolished to make way for the factory south of the North Mill, now abandoned.

Chris Copeland is Nailed’s Treasurer, so we had seen his and Bernadette’s impressive garden before, but there were things we hadn’t seen before, notably the addition of their new wildflower garden, where they have been dedicated to including native British plants, including Viper’s Bugloss.  The Copeland’s Garden is partially tiered, with hidden lower parts, accessible by winding staircases.  There seems to be a new perspective and secret space at every turn.  There are some immense trees here, creating shaded canopies, and many of the dense borders are edged with local stone in traditional drystone walling.

This garden inspired one Duffield visitor to the gardens to tell us, “I wouldn’t  have considered moving to Belper, but now I’ve seen how beautiful it is I would. And it’s nice to see a proper community.”

Kathy Fairweather is, with Belper Town Council, the organiser of the Open Gardens. Her garden is a maze of passages, and small but very different spaces.  Kathy had a musician, Ed Hulse, creating a gentle atmosphere, which worked well in the cooler shaded spaces of Kathy’s twisty garden. Around a conifer of a hundred trunks, a bridge takes you across a pond to a garden including unusual scuptures, with mirrors and art along the wall, to a hidden vegetable garden.  Kathy had lots of trowels left around her garden, for impromptu gardening.

Here we found Belper’s new Mayor and Deputy Mayor cycling around to the houses on the Open Gardens map, to help combat the Climate Emergency by reducing pollution.

Wyver Lane gardens are separated from their houses by the access road, because the river is at the bottom, with more houses on the very steep incline above.  This creates two separate garden spaces – one gently sloping down to stunning views across the river, and a  steeply tiered garden to the rear.

Both gardens are relatively small compared to other gardens on the trail.  The river side garden was accessed through a rose garden and clematis archway to a lawn with chicken topiary. We gained a rare new view of the River Gardens and East Mill from this location.

The tiered garden is all stairs and beds, with a neglected patio area.  The flowers were very different in each garden. The rear garden appearing wilder and the river side garden appearing more controlled and cultivated.

The Memorial Gardens are probably the most seen and most used of the gardens we attended, with the River Gardens being the only public garden which might get similar sighting and footfall.

The Memorial Gardens are used regularly as a hub of many local events and gatherings in summer, as well as containing the major display which gets judged for the In Bloom competitions which Belper often does well in. These gardens have won us many awards, and have been crucial for the WW1 centenary, now including the new Sacrifice sculpture, which was still covered during Open Gardens.

The council gardener does an incredible job of creating new and impressive displays every year, bringing the town centre vibrant colour and creativity throughout the summer months.  This year is no exception.

There is also a bed of vegetables in these gardens, which have survived pilfering this year.

These displays will be judged by the In Bloom judges next Friday.

St. Peter’s is known for its interesting old trees, large rhodedendrons and historical gravestones, but hidden at the back is one of the factors that led this church to win an Silver Eco-Church award in September last year.  They are growing food for the community.

There is also a Bee Hotel, designed to help bees to survive in a world we have made a threat to them.

St. Peter’s Church eco adventures were being promoted by Anne Clark, better known to most as the creator of Woollen Woods.  Anne’s grandchildren had written a book, Nature Savers, which was available, and Anne was giving out the new blue hearts which are to signal gardens where parts have been left and encouraged to become wild, expanding the number of native wildflowers to sustain our ecosystem, especially in regards to insects like bees and butterflies.  These blue hearts are growing in number, but have nearly run out, with three being left at time of publication.

Also being given out were packets of wildflower seeds to help with the rewilding for a Wilder Britain.  St.Peter’s, under advice from Derbyshire Wildlife Trust, has done an audit of their flora, and are encouraging and helping more wildflowers in some parts of the churchyard.

St. Peter’s offered a large cafe, which was well attended.

Transition Belper have had a lot to do with the transformation of the train station, including the rewilding of some sections.  The dedicated wild section didn’t have much to show that was flowering during the Open Gardens, however, the rest of the planting remains as impressive as In Bloom judges have assessed it in the past.  The St. John’s Wort (yellow flowers) has now spread, as it is wont to do, to create partial hedges of yellow blooms on both sides of the station.  The planting here has been good for insects, with Lesser Stag Beetles being regularly spotted here.

Briar House sits on the site of the Strutt family’s old garden, and relatively recently the Nightingales discovered the ruins of the Strutt Observatory, where William Strutt would stargaze.  There is some mystery as to what happened to the dome, although the documentation for the sale of telescope has been discovered.

The universe itself was not the only impressive vista visible from this location, as we got a Strutt’s eye view of the mill site, although not as he would have seen it, as the East Mill, which dominates the landscape was completed 82 years after his death.

These gardens were much more about lawn and architecture.  There’s almost a touch of Capability Brown or Charles Bridgeman, as nature seems to rule along the driveway entrance, running up to large expensive architecture, expanses of lawn, sculpture, well established trees and a large water feature, but with no borders for flowers.

The Nightingales offered an impressive array of refreshments, which they were selling to raise money for the MS Trust.

Next year Nailed will definitely be making sure we get to some of the gardens we didn’t see this year.
How many did you get to? Did anyone get to all of them? If you didn’t go, do you think you might be tempted to explore the wonders and magical secrets of Belper’s gardens next year?