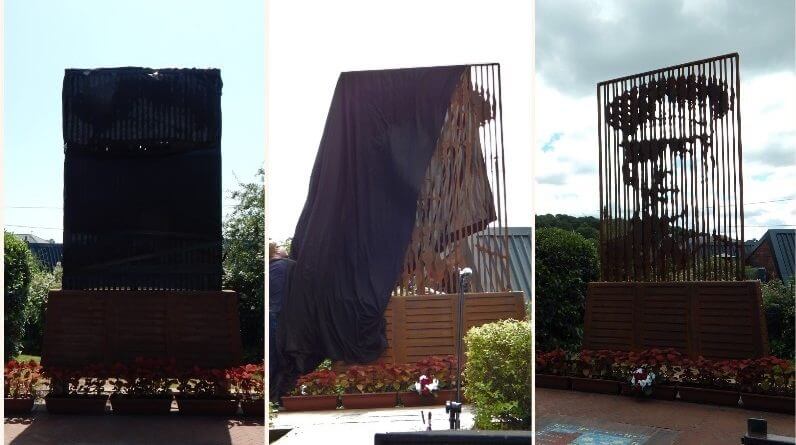 Today saw the public unveiling of the Sacrifice sculpture in the Memorial Gardens.  Sacrifice bears the face of Jim Green, one of “the fourteen” Belper men who died on the first day of the Battle of the Somme, 1st July 1916. It was the greatest loss of life in a single day for Belper in all of its recorded history.

This was the last event of Belper’s centenary events, organised by Belper in Wartime. The original piece was part of the performance, The Fourteen, created onstage through actors storing pikes in a rack, which gradually made up Jim Green’s face. A permanent version, as a memorial, was then commissioned, fundraised for, and created out of weathering steel, by the orginal artist who created the stunning endpiece for the play, Andy Mayers.   The memorial has been paid for by the citizens of Belper through direct contributions, and through a variety of fundraising efforts across local events throughout the 4 years of the World War I centenary.

Fliss Goldsmith acted as Master of Ceremonies, opening with a short speech, explaining the provenance and thanking those who made it possible,
“Now, three years on and on the eve of the Battle of the Somme, that permanent version is here.  That is due to the thousands of people who have contributed their money and time.  There are far too many of you to thank individually.  So on behalf of the entire Belper in Wartime team – THANK YOU! Thank you all from the bottom of our hearts.  To the relatives of the fourteen, thank you for your support and help.  It has been invaluable.”

The proceedings included Paddy Stafford leading the Belper Junior Musical Theatre group in a rendition of “Only Remembered”, a recitation of Walter Pepper’s own words written on 30th June 1916 by Josh Sly (the actor who played Walter), the day before he died, the playing of The Last Post (the British infantry bugle call used at funerals and remembrance days), and a performance of Mat Williams’ Belper-focused folk song “In One Hundred Years”, which was composed for the commemoration “We’ll be Home For Christmas”, backed by Belper Musical Theatre.

The event was highly attended, with estimates ranging from several hundred to 1.5 thousand.  There were at least four times as many people as the highest attended Remembrance Days. The unveiling was followed by one of this year’s Larks in the Park, with continuing musical performances.

Belper in Wartime are now hoping to create an educational programme about all of the 223 men lost from Belper in World War I.

Sacrifice now stands forever in the Memorial Gardens, a memorial to the painful losses suffered by Belper in the war, and specifically the fourteen who lost their lives on that first day of the Somme.  It also stands as a marker of Belper’s community spirit, having blended together the hard work and dedication of various spheres of local life, including Belper’s theatre, art, history, parks, community work and memorialising.

4 thoughts on “Sacrifice is Unveiled”