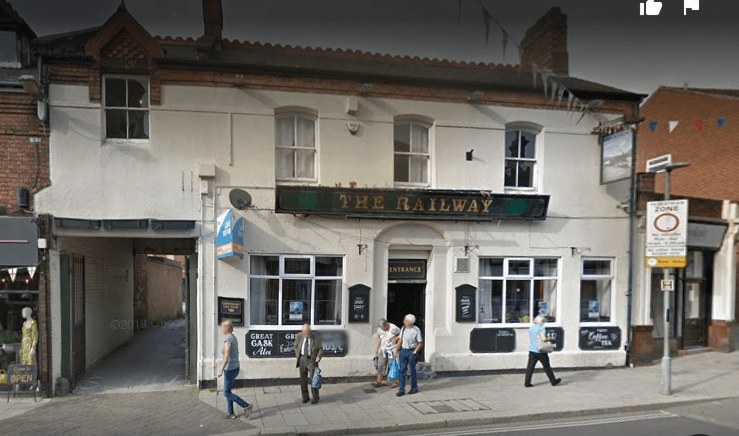 There has been much chatter about the reopening of the The Railway Hotel on King Street, and there have recently been construction barriers blocking the back gates, through which one can see a new garden area, with artificial grass and new paving.

The pub is set to open at 5pm on Friday 5th July 2019, just in time for the Belper Food Festival on Sunday 7th July.

The owner is Star Bars and Pubs.  The new licensee is Lincoln Green, a Nottingham based brewery. The new licensee gets their name from the cloth legendarily used by Robin Hood and his Merry Men, in their championing against government and the rich, for the common people. This is a deliberate association.

Communication with Nailed from the new licensee omits the “hotel” part of the pub name, and we have now recieved confirmation that it will not continue as a hotel.*

Amber Valley Borough Council recieved a planning application from John Dixon and Associates, (who are based in Oldham, not Amber Valley) on behalf of Star Pubs and Bars (the owner).

Comments on the application include:

“Star Pubs, in conjunction with Lincoln Green Brewery, the new licensee, are keen to invest in the premises which requires a complete refurbishment internally and externally to rejuvenate the premises to realise its full potential.”

“Over recent years the premises has become tired and unloved and so with the proposed alterations and the introduction of Lincoln Green Brewery managing the premises it is expected The Railway will reach its potential as a traditional community pub selling good food from local produce and award winning ales.”

“The internal licensed area is to undergo a complete refurbishment.”

“The rear car park is under used due mainly to its poor access but also due to the fact there is a large pay and display car park behind the premises.”

“Creating a much-improved external area will provide an attractive facility to customers ensuring the continued viability of the public house as a business and providing commercial sustainability for the future.”

“The introduction of the timber huts, gazebo and replacing the Tarmac areas with artificial grass and block paving are considered sympathetic to the existing surroundings and will enhance the rear aspect.”

We contacted the new licensee, and they sent us the following statement:

“The Railway in Belper is owned by Star Pubs and Bars, and Lincoln Green have worked with Star on a joint investment that has transformed the tired building giving it a warm, welcoming feel and a timeless classic look suited to the pub’s architecture. Original features such as architrave and the old bar front have been retained and the open fire reinstated. Whilst the interior is an open plan space, there are lounge and cosy snug areas with comfortable seating. Other work has included upgrading the toilets, adding a barista quality coffee machine and installing a new kitchen to enable the introduction of freshly prepared bar snacks.

Our focus is very much on our range of drinks, with cask conditioned ‘real ale’ being the headline of our drinks offer, many of which are brewed by ourselves in our Hucknall based microbrewery. An exciting range of ‘craft’ beers will also be available, with unusual beer styles being offered; think Double and Triple IPA’s, Sours, Imperial Stouts and more! If gin is your thing, you’ll appreciate the selection of 45 that will include some of the best of independent distillers throughout the UK. We also love a whisk(e)y every now and then, so our range of 30 offers a selection from every major whisky producing region in the UK and beyond.

We’ll offer a menu of sharing platters and bar snacks; we’re not a knife and fork experience or gastro pub, preferring to offer a hearty bite that’ll fill a gap when you’re socialising with your friends. There’ll be regular entertainment with live acoustic music, weekly pub quizzes and we’ve even reinvigorated the old fashioned idea of a weekly meat raffle, the proceeds of which are donated to support local charities.

Our new pub garden is a wonderful sun trap and has been zoned into four separate areas, providing flexible space for our guests. We’re also planning future phases that will include the opening of an outside bar within the pub garden outbuildings and the refurbishment of our upstairs function room.”

Be there at 5pm on Friday 5th July to get a first look at the new face of The Railway.

*article originally stated that we were awaiting confirmation on hotel facilities

3 thoughts on “The Railway to Reopen”