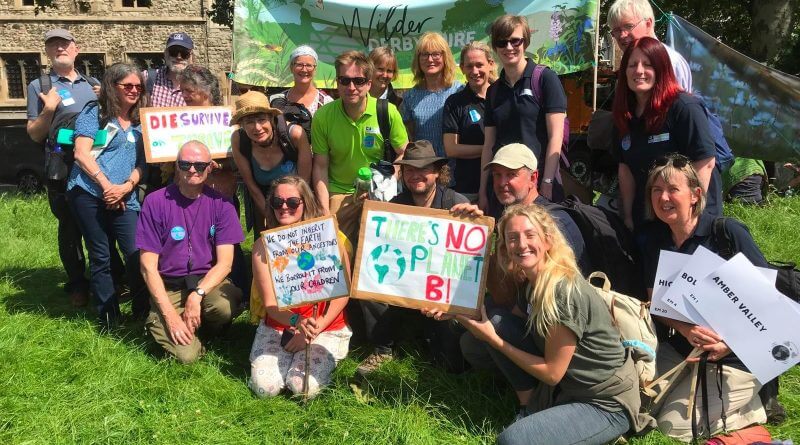 50 residents from across Derbyshire travelled to Westminster, on Wednesday 26th June 2019, to meet with MPs at one of the largest mass lobbies of politicians in recent history.

There, Derbyshire constituents joined thousands of people from around the country – from school children, young people, volunteers to farmers, councillors and doctors – urging MPs to back immediate action for wildlife and climate change. More than 15,000 people from almost every constituency in the UK were estimated to have travelled to Westminster for the meeting.

Hundreds of MPs were taken by rickshaw to meet thousands of constituents urging politicians to back a goal of halting UK emissions and to support action to protect the environment.

The meeting took place following a call last month from the government’s climate advisers for the UK to set a more ambitious target for eliminating the emissions driving dangerous temperature rises and ahead of Parliament debating a new Environment Bill. The Wildlife Trusts believe that the bill must deliver ambitious targets for wildlife and a legally-binding Nature Recovery Network.

The day was a complete success. The energy at Westminster was vibrant and I felt empowered by the commitment of others who also attended the rally. It really felt like it was the start of something big and that we will get the change we want to see for wildlife and for the environment. I just want to say a huge thank you to everyone in Derbyshire for your support and especially to those who joined us in London for the day, we will get to see a Wilder Derbyshire.

The event, which took place in the area surrounding the Palace of Westminster, was organised by campaign groups The Climate Coalition and Greener UK. The two coalitions consist of more than 130 organisations representing over 15 million people – ranging from aid agencies such as CAFOD and Christian Aid to community groups such as the Women’s Institute and conservation bodies such as The Wildlife Trusts.

The Time is Now mass lobby took place following numerous reports emphasising the need for urgent action. The most recent, from the IPBES, showed that nature is declining globally at rates unprecedented in human history — and the rate of species extinctions is accelerating, with grave impacts on people around the world now likely.

The government has said the UK will set a target of reducing emissions of greenhouse gases to ‘net zero’ by 2050. Campaigners argue the government should show greater ambition and set a 2045 date in recognition of falling costs, technological developments and the need for urgency.

Add your name to calls for a Wilder Future.

Further information on the mass lobby can be found at theclimatecoalition.org/thetimeisnow