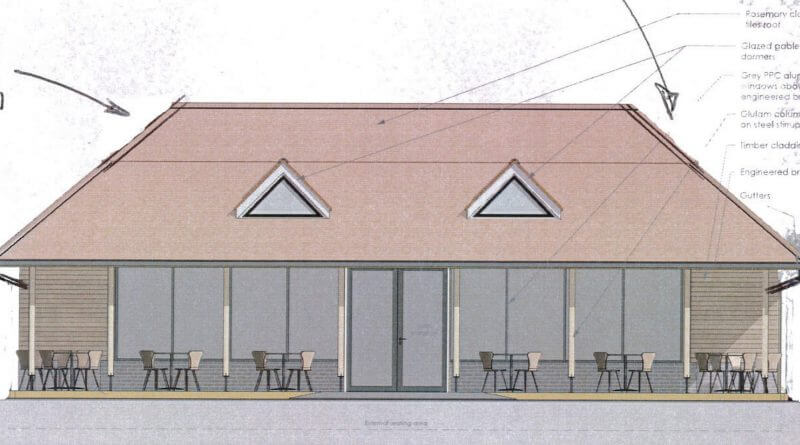 Members of Amber Valley Borough Council’s planning board approved the authority’s own plans to finally replace the dilapidated former rooms at a meeting on Monday 17th June 2019.

The tea rooms were originally built in Belper’s River Gardens 1906 but have lain dormant since 1981, nearly four decades ago, partly due to vandalism.

However, with the approval of the new tea rooms scheme, which has a £420,000 price-tag, the authority’s first ever Green Party councillor made a point about the perceived need to overhaul the council’s eco policies.

Cllr Dave Wells – who won his seat in Duffield in May’s elections  – said that while action on the tea rooms was welcomed, the council could do better, saying “there is so much more it could do”.

He felt that the final design could have been more environmentally-friendly, such as through the installation of solar panels.

Cllr Wells said: “To do so makes financial sense in the long run. These are not costs, they are investments.
“To take these actions now would be much cheaper than retrofitting.
“The applicant is this council, the main funder is this council, the planning authority is this council.
“We have the opportunity to leave a legacy, to be responsible for a building which sets high standards in looking forward to a zero-carbon future.
“The Swiss tea rooms was a building much-loved by several generations in the past. What will future generations, indeed the younger people of today, think of a building constructed in 2019 with little thought to its carbon emissions?
“Like everyone here, I want to see a replacement for the derelict tea rooms, but I find it difficult to vote for a building that does not reflect the needs of a planet threatened by climate change.
“I know some people will say that we can’t afford to do this. I say that we can’t afford not to do it. Let’s take this opportunity and leave a legacy to be proud of.”

The approved tea rooms has a slightly altered design to that proposed at the start of the year, with changes made to appease heritage chiefs.

This involved changes to the roof to match the current design, along with removing plans for small windows in the eaves of the roof.

Deputy leader of the authority, Labour’s Cllr Ben Bellamy, said: “I would like to welcome this application finally coming forward.
“A lot of hard work and officer time has gone into this in the past few weeks, in particularly to become acceptable to heritage consultants and keep within budget.
“We need to get on and build this as soon as possible.”

The design will cater for 44 customers to sit inside and a further 40 on an outdoor veranda.

The current tea rooms are not listed by heritage chiefs, but the River Gardens itself is Grade-II listed, which is why any potential damage to this by an ill-fitting replacement tea rooms drew so much scrutiny.