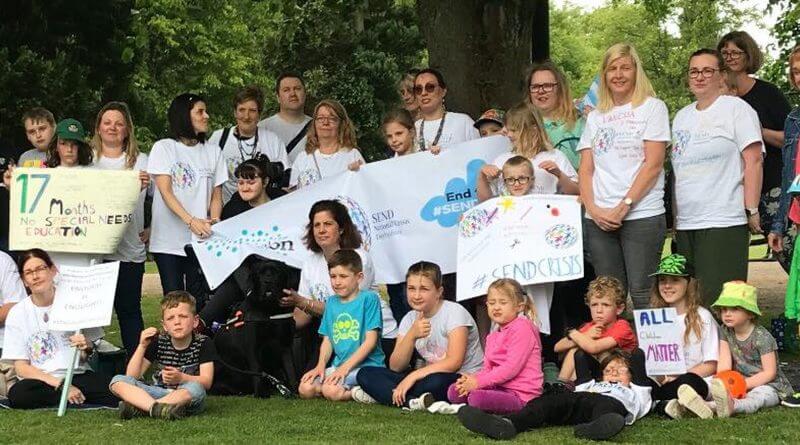 Dozens of parents of kids with special educational needs rallied in Derbyshire to raise concerns over a funding “crisis” for essential school support.

Over the course of Thursday’s rally in Matlock, around 90 parents and their kids gathered in Hall Leys Park to call for a sufficient level of funding.

They feel that too often, debates over school support for their kids, who have high needs, turns to a culture of “parent blame”.

A similar protest was also held in Derby on the steps of the Council House. These were among thousands of parents who protested across the country yesterday – including in the capital – to raise awareness of the issue. This included handing in a 12,000-strong petition to Downing Street.

While pupils in Derbyshire are off school this week for half term, many of the special educational needs kids at the centre of the turmoil have been out of education for months and years.

This is often as a result of failings from schools and the county council to provide sufficient support in the form of a legally-binding document called an Education, Health and Care (EHC) Plan – of which the county council oversees more than 3,000.

Rebecca Skinner, from Ilkeston, has a 12-year-old son. He is on the autistic spectrum and also has attention deficit hyperactivity disorder (ADHD). She was phoned on her son’s last day at primary school by his prospective secondary school. Rebecca says the secondary school said her son was “not welcome” to attend and asked that she take him off the school roll. The school had said that if Rebecca insisted on sending her son he would be permanently excluded.

Her son was subsequently permanently excluded and has now been out of school for three years.

Rachel Mitchell, from Ironville, whose daughter, Daisy is aged six, said: “Our children are being failed by the lack of funding and specialist support that they need. Every child is entitled to an education and this is becoming a struggle and fight to receive.”

Vanessa Rogers-Prueitt is from Hilton. Her daughter, Fran, aged 17, had attended John Port School but had to be home-schooled for two years.

Fran is on the autistic spectrum and during her last two years in John Port received just five hours of tuition per week. Fran had hopes of attending Derby College but her mum says no funding for support came forward and she was forced to drop out. She is now having to study online at home.

Vanessa said: “My child was not supported in school or college, the funding for the EHC Plan was never received, too many times I have had to chase the local authority.
“When will they be made accountable for not supporting children and families?”

Trudi Martin, from Chesterfield, says that her 13-year-old daughter Lucy, has been out of education for three years and has been unable to attend school for 15 months. Lucy has cerebral palsy which affects the use of all four of her limbs and her ability to speak. She is wheelchair bound and uses eye-gaze technology to speak.  Trudi said: “We have to get across the parent bashing that goes on.”

Gaye Thomlinson lives in Heanor with her nine-year-old son Calum. He is on roll at Langley Mill Academy but has not attended for 17 months.  Calum is profoundly deaf and has dyspraxia, sensory issues and demand avoidance.  Gaye has spent £7,000 fighting for her son at tribunals against the county council.  She said: “It has taken over our lives.”

Nikola Matulewicz-Evans, from Chesterfield, helped arrange the Matlock protest picnic.  She said: “Schools are not listening to parents.  The money is there for the local authority to support these children, but they would rather spend it fighting us.”

Sharon Davis, from Brampton, has a 10-year-old son called Josh who has quadraplegic cerebral palsy and is wheelchair-bound.  Josh has been told that he does not qualify for school transport because he is within “walking distance”.  Sharon said: “These children are our future.”

Teresa Bowler is from Ironville. Her son Daniel is six years old and has been out of school for a year.
She said: “The crisis with special educational needs and disabilities (SEND) is spiralling out of control and this is why the parents need to shout out together.
“We will continue to fight as we grow stronger together.
“This is for the children, we are their advocates, we are the professionals, but most of all, these children deserve an education that meets their needs and not the local authority’s need to control.
“The parent blame has to stop especially within social care.”

The government’s children and families minister Nadhim Zahawi said: “Our ambition is for every child, no matter the challenges they face, to have access to a world-class education that sets them up for life.
“Funding for the high-needs budget is a priority for this government and we know that councils and schools are facing pressures. That’s why in December we provided an extra £250m up to 2020 to help manage these costs.
“This takes the total amount that we have allocated for high-needs funding to £6.3bn this year, compared to £5bn in 2013.
“At the same time, the education secretary has been clear that we are working closely with the sector as we approach the spending review and we have launched a call for evidence to make sure the funding system is getting money to the right places at the right time.
“We are revising the SEND code of practice to improve ways to identify and meet special educational needs.”

Photo: Parents of children with special educational needs rally in Matlock to raise concerns of a funding crisis, by Eddie Bisknell