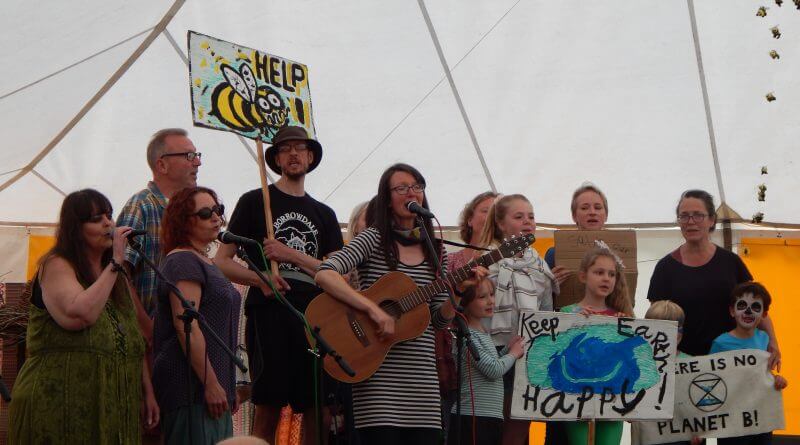 The ethos of Belper Goes Green was encapsulated in one song on Saturday.

The last performance of the day on the Earth Stage was “Earth Songs with Maggie Braley”.  The last song she sang in this last set reduced several members of the audience to tears.

Original protest songs have been attempted for Belper Goes Green before.  In a previous year a group of writers and musicians was set up which created a few songs, which were to be performed on the old lorry stage.  Conflicts between members of the group, ironically, stopped that performance happening on the day.  On Saturday, that dream of properly representing the fight which underpins both Belper Goes Green and Transition Belper was realised by Maggie Braley, her backing singers, and her banner wielders.

Nobody knew about the surprise protest until it happened, with the audience diving for phones to record the moment, as children and other adults climbed onto the stage with banners highlighting our ecological plight, which is caused by the normalisation of ecologically abusive behaviour by companies, governments, and private citizens.  Behaviour which can be changed.

Maggie gently told us that there is still time to make a difference, that we can’t deny it anymore, that it’s not hopeless when we work together.

Maggie Braley is one of the original founders of Transition Belper, and she stunned people she had known and worked with for years, on addressing such issues in Belper.  It was a perfect moment, where everything that Belper Goes Green is about came home in one performance, to encourage action.  Just like the festival does.

One thought on “THE Song of Belper Goes Green”