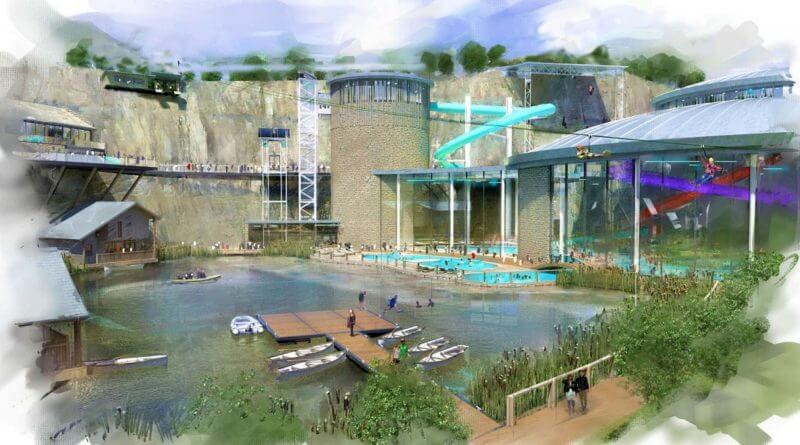 A colossal scheme to build a waterpark resort in a disused Derbyshire quarry have been met with both excitement and scepticism.

The ambitious project, proposed by Hillcrest (Crich) Limited for Crich Quarry, north of Crich village, were revealed in plans submitted to Amber Valley Borough Council. A formal planning application has not yet been submitted.

However, the proposed Amber Rock Resort would include an indoor water park, a 116-bed hotel, 148 straw bale lodges – seven of which would float on the quarry’s lake – 210 holiday apartments, climbing walls, a zip-line, bowling alley, shops, a restaurant, a swim-up bar and a sports hall.

The closest neighbour to the site is the popular tourist attraction, Crich Tramway Village.

Dr Mike Galer, general manager of the tramway village, said that the scheme was an exciting proposal that would further boost business and tourism.

He said: “Plans for this first surfaced in 2011, I believe. This appears to be very similar to that but with significant changes to the design.
“It would have a massive impact on the area, and would bring more customers.
“Obviously, there will be concerns from people who live in Crich about noise and traffic, and we will be interested to hear more on that.
“At the moment, there is no access to the site other than through land that we own and we haven’t heard anything from the developer.
“You would have thought they would have been in touch with us, their nearest neighbour.
“There is a lot to talk about with them and we would be looking to work in partnership with them.
“At the moment it (Crich Quarry) is a bit of an eyesore. Teenagers are often down in it too, it is unsafe.
“It seems that someone needs to do something with it.
“It is an exciting proposal for us and especially if we can work in partnership with the developer.
“There could be a lot of benefits. Especially in terms of tourism in the area. We are one of the top tourist attractions – and then there is also the Peak District National Park, Chatsworth and the Heights of Abraham.
“We wouldn’t see this as another rival but as a partner and Derbyshire is a great place to be because of that.
“My pitch is that they should contact us, if it is genuinely a desire, to get in touch – it would be a welcome addition.”

Meanwhile, the area’s borough councillor, Councillor Gareth Gee, said that he would remain sceptical until formal plans were submitted. He said he could see plenty of positives and negatives of the scheme.

Mr Gee, the deputy leader of the Amber Valley Conservatives, said: “This place has been in the offering since 2011 and the developer seemed to be stuck in lengthy negotiations with Derbyshire County Council but I am still waiting to see a serious proposal.
“I’ve been in talks with the developer before on the impact on Crich. I suggested that they should consult local people and maybe have an open day.
“It looks like it could be something like Splash Landings at Alton Towers, before it seemed to focus on the hotel side of things.
“I’m not sure on how much traffic could impact on the area. I am pleased to see that they would have their own car parking because the Tramway Village already has to use overflow sites.
“It is too early to make a judgement. It would be good for tourism and good for jobs. There is not much in the way of businesses moving to Crich to set up businesses and create jobs.
“Of course this could not come off at all, it’ll all come down to whether they can get the investment.
“I am not for or against at this stage, I’d like to see if it can happen.”

During construction, the project would create 200 jobs, and once operational the site would have 100 full-time and part-time jobs.

It is thought that formal planning applications will be submitted in two batches.

One would be to clear and prepare the quarry, the other would be for the construction of the huge development.
All that has been submitted so far is an environmental impact screening.

What is all this talk of Climate Emergency..?  What does ‘Zero Carbon’ mean?  How can I make a difference? There’s