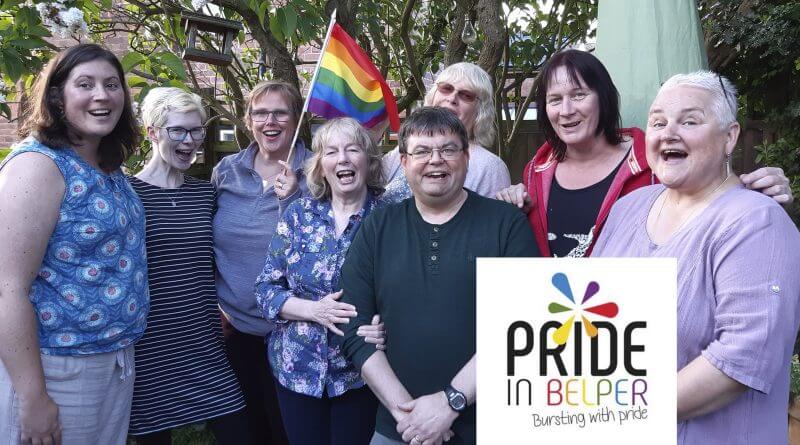 Belper is great at celebrating things – we have the Arts Trail, Belper Goes Green, the Food Festival, Belper’s Virtual Run and the Belper Games – now it’s time to start celebrating the people of Belper. On 3rd August, Pride in Belper will seek to celebrate people of all ages, abilities, cultures and identities all of whom make up this wonderful community. Join us!

In 2016, Sarah and her wife Helen were the first same-sex couple to get married in a place of worship in Derbyshire. This experience paved the way for Sarah to take the decision to pull a team of local and creative event planners, activists, historians and all round great people to form the Pride in Belper Planning Committee. The name ‘Pride in Belper’ was chosen deliberately over ‘Belper Pride’ to ensure that EVERYONE is able to relate the event. It’s about celebrating the richness of diversity, creativity and inclusiveness that we are lucky enough to share in Belper. It’s a celebration of everyone and, because of this, the LGBT+ community will be as prominent as the dominant heterosexual community. It will be vibrant, loud and exciting!

Pride events are held all over the world, mostly in cities and big towns, bringing together people who represent many different identities, cultures and abilities, and are a huge celebration of diversity and inclusivity. This year marks the 50th anniversary of the Stonewall riots in Greenwich Village, New York, where people of the LGBT+ community made a stand against the violence and discrimination that was thrown at them daily. Pride is the celebration of the anniversary of this liberation.

Pride is important for families because it celebrates everything that a family shares together – love, compassion, safety and history. Pride is also important because, like families, it celebrates the unity and diversity of the people within it, the cultures they belong to, the beliefs they share and the identity that they have. Pride stands against the discrimination and invisibility that some families and some people in families face, it stands boldly forward and says loudly, “we see you – you are not invisible, you matter”.

Pride brings together Role Models and Allies of all the intersections of gender and sexuality and celebrates them together. For people of all ages, Role Models and Allies are important because everyone needs to know that, whoever they are, and however they identify, they are valued and visible. Role Models enable children and young people to normalise the difference that they may feel from their peers or other family members. Allies are active supporters of people who identify differently from the way society still sees ‘normal’.  As a family, you may know people who identify as LGBT+, or your children may have friends who identify as LGBT+ or friends who are questioning their identity and sexuality. Attending an event that celebrates everyone, however they identify, will not only say to people of all ages and identities that this community is inclusive, it will also say that this community is safe. In a world where being LGBT+ is still illegal in over 70 countries, with seven still carrying the death sentence, having a Pride event in a small town not only says we celebrate the person you know you were meant to be, but it also says “we value you, there is a place for you in Belper”!

We are lucky enough to live in a country where there are laws that respect and protect each person’s freedom. The reality of what a family is has changed over the years out of circumstance as well as out of love. A family is no longer only defined as the archetypal husband, wife and 2.4 children. In 2019, we know that the make-up of a family does not depend on gender, it depends on who you love and how you love each other.

From 2020, the National Curriculum will include relationship education in primary schools, which will be broadened to relationship and sex education in secondary schools. Relationship education will include respect for people who identify as Lesbian, Gay and Bi-sexual as well as all gender identities. It will also cover relationship recognition and protections that the Equality Act (2010) affords people and families who identify as LGBT+. Children and young people need to know all of this, but they also need to see this in their communities. Pride in Belper is not about identifying difference in order to consciously be inclusive, it is about respecting the fact that we are all human and therefore we all have the same rights to be respected, feel safe and be celebrated.

Pride in Belper was conceived to enable the community to openly and proudly celebrate the rich diversity within the town. The support the planning team have received has been proactive and huge. It has grown from a family friendly picnic in the Memorial Gardens to a big, brilliant and beautifully inclusive family focused celebration throughout the town.

In a world where you really can be anything – be respectful, be fair, be kind. Come to Pride in Belper on 3rd August and let’s celebrate our wonderful community together!

Sarah Barley-McMullen is Chair of the Pride in Belper planning team. Sarah has lived in Belper for over 12 years, she is married to Helen and works as a Senior Lecturer and Academic Lead for Inclusion at the University of Derby. Sarah has recently been honoured with the award of Stonewall Role Model of the Year, 2019.