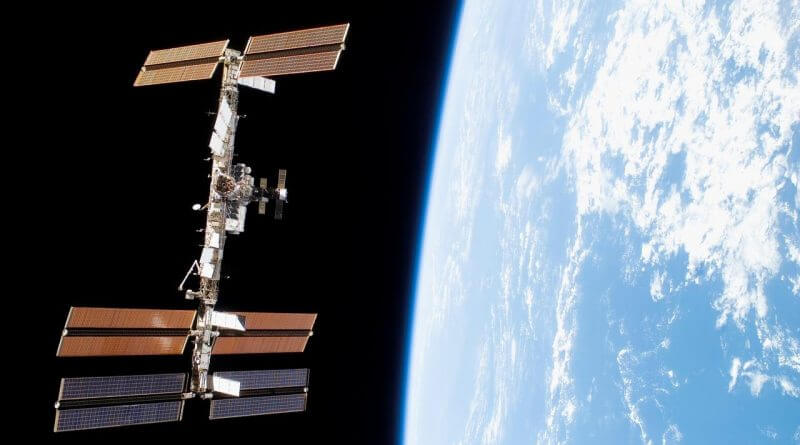 The May Night Sky brings a good opportunity to see the International Space Station. Jupiter and Saturn can be seen after midnight. Use the Moon to locate the double star, Algieba.

There is a very good podcast here (Guardian: The New Space Race) about the (sometimes) conflicting interests driving space exploration in the 21st Century.  The Guardian science writer, Philip Ball, discusses: the militarisation of space, new nations entering into space exploration, the involvement of commercial interests, and how new international treaties may be needed to replace ones made in the 20th century.

Algieba: A Double Star in Leo.

You will need a telescope to resolve Algieba into a double. You may need to try different magnifications to “split” the star. However, when resolved this double is regarded as one of the more impressive in the night sky. There is a guide to the constellation and how to find Algieba here: EarthSky: Leo.

On Sunday, 12th of May, the Moon will be sitting in the constellation of Leo. Look up high and towards the southwest at around 10.00pm. The Moon will be resting between the bright star Regulus and Algieba – making the star much easier to spot.

Mars is just about visible. Look for it in the west as night falls. On the nights of the 8th and the 9th it is in the same region of sky as the crescent Moon. Towards the end of the month, Mars will be too low in the sky to be seen.

Jupiter and Saturn can be seen in the south, in the early morning hours until dawn. The planets are close together but are also low in the sky – making observation difficult for those without clear horizons. Jupiter starts its rise around midnight and Saturn around 2.00am.

The Spot the Station website is currently listing sightings between Wednesday, 8th of May and Tuesday, 21st of May. Fly pasts vary from under a minute up to six minutes. ISS fly pasts are easily visible, it is just a matter of knowing when and where to look. The Spot the Station site shows the exact times, direction and duration of ISS flypasts during May.

In the coming weeks ISS is only visible in the early morning hours. However, between the 17th to 21st of May, the space station will also be visible in the evening. Look out for it on Friday 17th (10.43pm), Saturday 18th (9.53pm and 11.28pm), Sunday the 19th (10.37pm), and Monday 20th (9.47pm and 11.22pm). On these nights the ISS will be in the sky for up to 6 minutes. To make sure of sightings NASA also provides an alerts service: Space Station Alerts. The service only alerts you to good sighting opportunities (sightings that are high in the night sky and of long duration).

The next DDAS  “Introduction To Astronomy” evening will be on Friday 17th of May from 7.30pm at The Friends Meeting House, St Helen’s House, Derby, DE1 3GY. DDAS member Mike Dumelow will be talking about Sir Arthur Eddington.

Their next observing session will be on Saturday 11th May 2019 from 9:30 pm onwards at the Society’s Flamsteed Observatory, near Brailsford. A variety of telescopes will be available, including the Society’s 10″ Newtonian under the dome, as well as any that may be brought along by members. New people are always welcome and you can even bring your own scope!

The next main meeting of the society will be held on Friday 7th of June at the Friends Meeting House, from 7.30pm. Bob Marriott, former Director of the Instruments and Imaging Section at the British Astronomical Association (BAA) will be giving a talk about “The Silver on Glass Revolution”.

Note that there is a room fee for the meetings, which is £3 for non-members and £1 for members.

If you would like more details please email DDAS Secretary Brian Dodson: secretary@derbyastronomy.org or check out the webpage here.