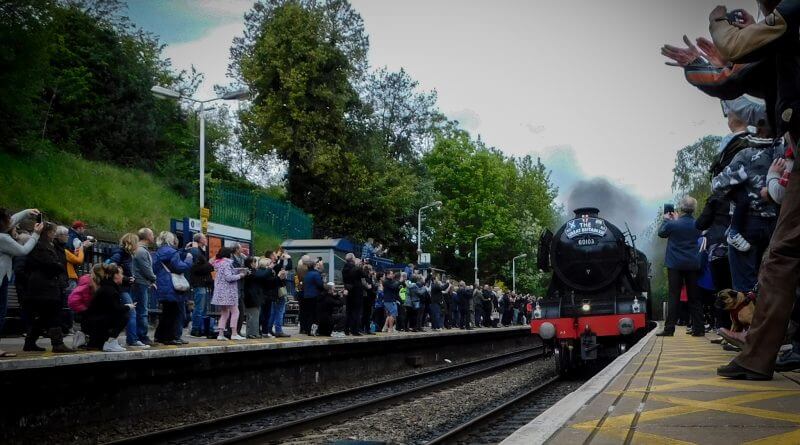 Today at 1:34pm the famous Flying Scotsman sped through Belper.

The train was running 30 minutes late after having to be diverted due to a broken rail between Sheffield and Chesterfield.

The engine was running as part of The Railway Touring Company’s “The Great Britain XII” tour, which took passengers on a £2695-£3495, 9-day tour of Britain by steam train.  Today, Sunday 5th May, was the final day of this tour.  Multiple steam trains were involved in this tour, but Belper was lucky enough to see the most famous one.

The Flying Scotsman, engine No. 60103 (originally 4472), was highly anticipated by Belper people, with both platforms of the station being packed with people waiting for a glimpse of the famous locomotive.  On the bridge over the tracks, people were standing on bollards to get a view over the safety wall.  There were people standing on surrounding walls, and at some points they were way over the safety lines on the platforms in their eagerness to see the famous train.

The Flying Scotsman arrived, incredibly briefly, in Belper, after travelling down from York, through Doncaster, through Rotherham and was intended to go through the normal route south through Sheffield to Chesterfield, but was sent on an un-named diversion, before coming through Belper.  From us, it travelled on to Derby, and Burton on Trent, before heading to Tamworth, then Warwick, Banbury, Oxford, and Didcot, to its final destination at Paddington Station in London.

Belper, the World Heritage Site branded as the genesis of the Industrial Revolution, has its train line set down in the ground because the Strutt family (who invested in the railway and helped fund the local building) feared that the proposed route would interfere with their water supply and livelihood.  After many redesigns and proposed routes, the now grade 2 listed Milford Tunnel was built.  The Milford Tunnel is the set down gritstone lined cutting which runs through the length of Belper, with 11 bridges in a mile.  The line opened in 1840.  At this time, the station was to the South of Belper, outside the cutting, with a coach to the Lion Hotel to get into the town centre,  but Belper residents didn’t like the inconvenience of the coach, and they complained as much then as now, which led to the station being moved to its current location in 1878.  The buildings themselves were demolished in 1973 when the Manchester line was closed, and the station became unmanned.

The Flying Scotsman was built in 1923 by LNER (London North Eastern Railway) and was part of The British Empire Exhibition at Wembley Park for the 2 following years.  The British Empire Exhibition was a show of power and innovation created as a last ditch effort to save the British Empire with the hopes of demonstrating British greatness, stimulating trade, and strengthening bonds within the Empire after British withdrawal from India.  From its premiere appearance it was always a flagship engine, often being used from promotional purposes for British identity, and for LNER themselves.  The Flying Scotsman has been used for inaugural journeys on new lines.

In 1934 the Flying Scotsman became the first authenticated steam locomative to achieve 100mph, setting a land speed record.  It was certainly fast when it came through Belper today.

In 1962, under Harold MacMillan’s government, British Rail announced that the Flying Scotsman would be sent to be scrapped.  In 1963, Alan Pegler, an entrepreneur and railway preservationist, secured the support of Prime Minister Harold Wilson to buy it outright, having fallen in love with it as a 4 year old child at the British Empire Exhibition.   The engine has changed hands several times since and is currently owned by the National Railway Museum.

The engine we saw today, is the original engine, but it was rebuilt to conform with new regulations in 1947, which gave it a new look to fit around the new boiler.  The engine has undergone several refits since, including a massive 10 year £4.5 million overhaul and renovation from 2006 – 2016.

Did you take video and photos?  Please add them in the comments on our Facebook Page. 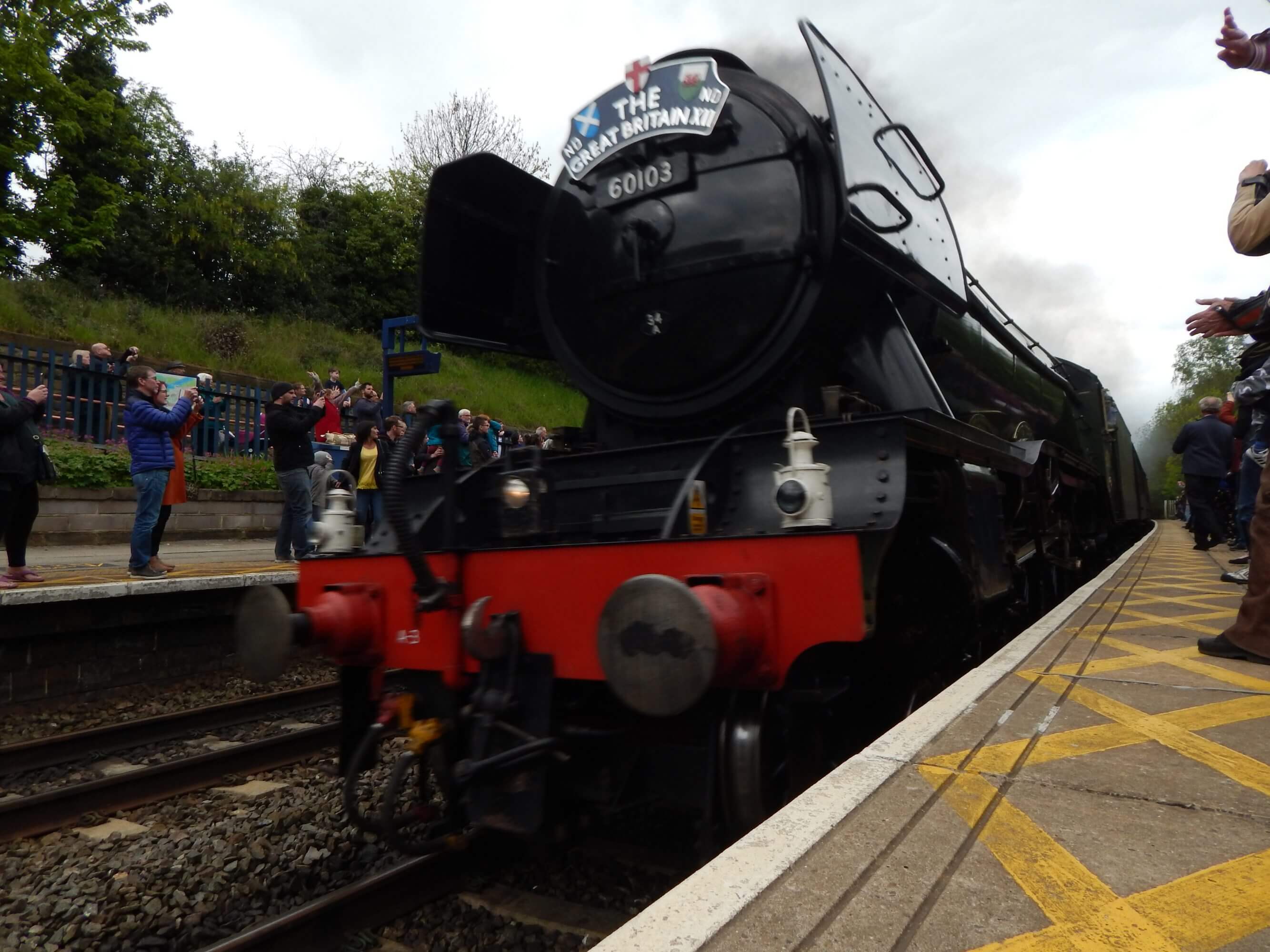 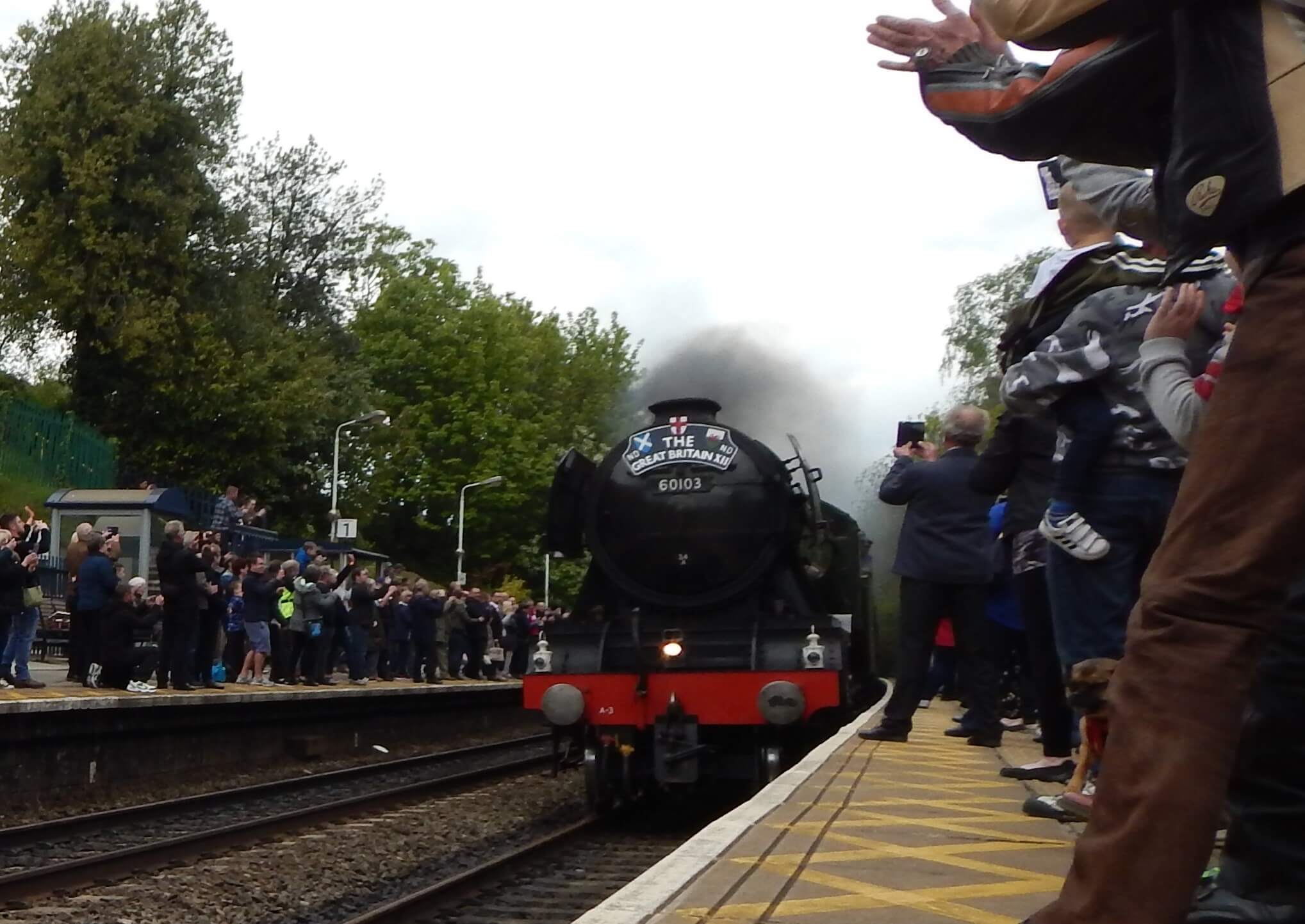