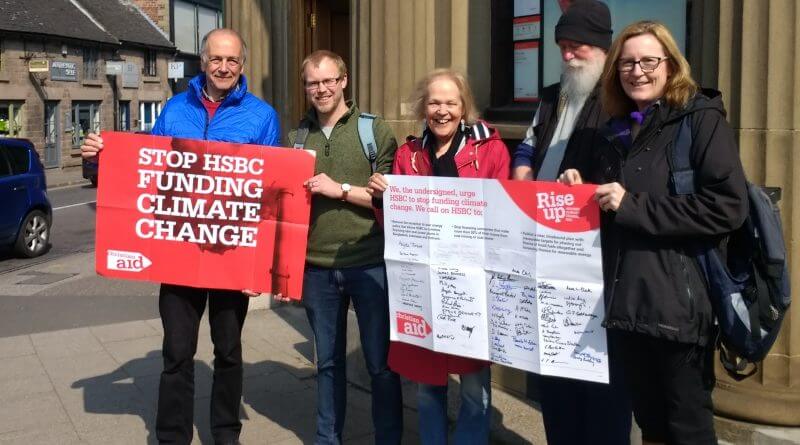 The 5 campaigners were part of a national action by Christian Aid to visit branches across the country to call on the global bank to ensure its activity is in keeping with the Paris Agreement’s target of keeping the global warming rise within 1.5 degrees above pre-industrial temperatures.

The campaigners delivered a letter to the branch staff to forward to HSBC CEO, John Flint, and a petition urging the bank to invest in clean energy and help protect the world and its people.

They also called on the bank to phase out financing fossil fuels altogether and to remove Bangladesh, Vietnam and Indonesia from an exception to a bar on financing new coal powered plants across the world.

Campaigner Tony Ward from St. Peter’s Church said: “This is not the kind of thing I have done before, but these are exceptional times. We have sat back an expected ‘other people’ to tackle climate change for too long.”

Christian Aid’s Lent appeal is called ‘Rise Up’ and as the waters rise around the world we have to rise up and speak for all those people whose livelihoods are being destroyed by climate change.

Leading scientists and the Intergovernmental Panel on Climate Change tell us we have 12 years to stop catastrophic climate change. We have to do everything we can to make sure that those financing dirty fossil fuels are held to account.

HSBC has agreed to invest $100billion in tackling climate change by 2025. This is fantastic. But it is still investing in fossil fuels which are fuelling climate change and destroying lives. We want HSBC to use its position as a major bank to lead the way and close the gap between its rhetoric and its actions.

Tom Wyke, Christian Aid’s Regional Coordinator for Derbyshire, and a Belper resident said “Today we appealed to HSBC to:

“HSBC claims that ‘Together we Thrive’, but HSBC’s continued investment in fossil fuels means that millions of people face a future in which it will be difficult to survive, never mind thrive. An ambitious plan would be for HSBC to shift their finances out of fossil fuels and into renewable energy. This is the most important step they could take to live up to their new strapline.”

“Staff at the bank were happy to listen to what we had to say and agreed to pass the letter on. Change happens when people come together and it’s great to know that we are part of a national movement from Cornwall to Aberdeen.”

Christian Aid works in 37 countries and its partner organisations across the globe are already experiencing the devastating effects of climate change, which hits the poorest communities first and worst.