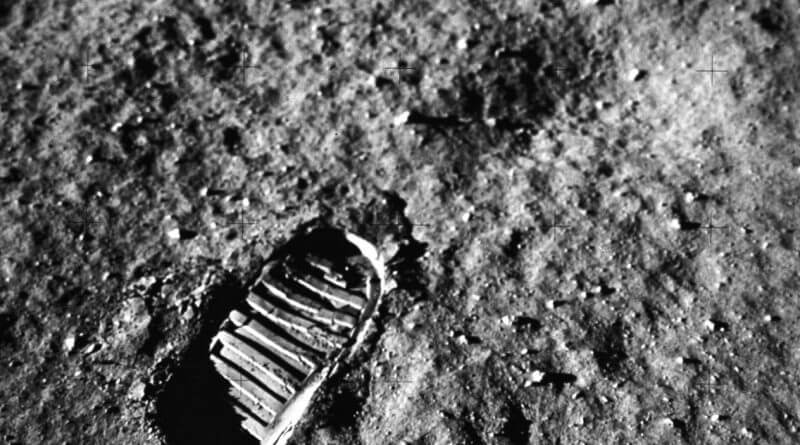 NASA aims to put astronauts back on the Moon

Following the presidential Space Directive Policy-1, signed on 11th December 2017, NASA has now been tasked with putting American astronauts back on the Moon within the next five years.

NASA have published plans for an “exploration campaign” to accomplish these goals and, ultimately, to use the landing on the Moon to inform a mission to Mars.

The image above (courtesy of NASA images) is from the first manned lunar mission, Apollo 11, which took place in July 1969.

To learn more about NASA’s plans, and the forthcoming space mission, visit the dedicated website: Moon to Mars

The Lyrids is a minor meteor shower, only producing around 18 meteors per hour at its maximum peak rate. A bright Moon at the shower’s peak, on the evening of the 21st – 22nd of April, will make sightings even more difficult.

The Eta Aquarids become active around the 19th of April, reaching their maximum on the night of 6th – 7th May.

As such, the background rate for meteors will increase during this time. However, patience will be needed if meteor watching. Do not be too disappointed if no meteors are seen – there will be better opportunities in the coming months.

Mars is visible in the southwest, just above the red star, Aldebaran in Taurus (a nice pairing). Look for it as night falls. At the moment telescope observations will only show a tiny disc. We will need to wait until Autumn 2020 before Mars is close enough to see surface details.

On the night of the 9th April, Mars and Aldebaran will be joined by a crescent Moon.

Jupiter and Saturn can be seen in the south, in the early morning hours up till dawn. The 2 planets are close together but are also low in the sky – making observation difficult for those without clear horizons. The Moon can be your marker: on the 23rd it is close to Jupiter, on the 25th of April it is close to Saturn.

Later in the month, Jupiter will start to rise around midnight – it is still low in the sky though.

Looking towards the southeast it may be possible to see Venus in the morning sky but it is fairly low down, close to the horizon, and is only visible for a short time before the sun rises.

The Spot the Station website is currently showing information up to the 18th of April. There is a fly past on Sunday evening, 7th April at 8.33pm, look up towards the west to see it, ISS will take about 3 minutes to pass overhead. ISS fly pasts are easily visible and are fairly frequent, it is just a matter of knowing when and where to look. The Spot the Station site shows the exact times, direction and duration of flypasts. NASA also provides an alert service: Space Station Alerts. The service only alerts you to good sighting opportunities (sightings that are high in the sky and of long duration).

The next series of evening fly pasts is due to take place from mid May to early June.

There won’t be an “Introduction To Astronomy” evening this month as it clashes with the Good Friday Bank Holiday.

The society’s Annual General Meeting is being held on Friday 3rd of May, from 7.30pm. This is the start of the membership year and, as such, is a good time for new people to join. You can also get a discount on your subs if you pay at the AGM. There will be a raffle with astronomy book prizes and coffee is provided during the break. See their website for the benefits of annual membership: DDAS

If you would like more details please email DDAS Secretary Brian Dodson:  secretary@derbyastronomy.org